Millions March Against Monsanto: A Global Awakening Covered Up by the Media 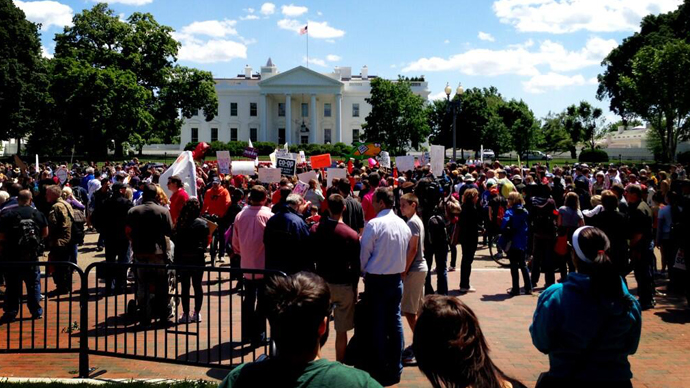 Over 2 million people peacefully took to streets around the world to protest the poisoning of the global food supply by the biotech giant, Monsanto.

Not surprisingly, the mainstream media has been pretty quiet about the event.

After relentless phone calls and emails by protesters, some coverage has finally been achieved, preventing the event from being completely blacked out. The same article was published throughout global media, including Yahoo, CTV, Huffington Post, ABC News, and  the UK Guardian.  The article downplayed the magnitude of the March and the importance of the cause:

Protesters rallied in dozens of cities Saturday as part of a global protest against seed giant Monsanto and the genetically modified food it produces, organizers said.

Organizers said “March Against Monsanto” protests were held in 52 countries and 436 cities, including Los Angeles where demonstrators waved signs that read “Real Food 4 Real People” and “Label GMOs, It’s Our Right to Know.”

Discover even published a hit piece, calling the event “cartoonish”:

The only thing that’s truly being poisoned is the biotech debate by such rhetoric. I’m also willing to bet that organizers are being as truthful about the number of marchers as they are about the science on genetically modified foods…Nonetheless, there does seem to be many people who buy the notion that dangerous GMOs are being foisted on the world by Monsanto.

The truth of the matter is, over two million people marched in more than 50 countries around the globe.  (See RT’s excellent timeline of the global event)Despite the grudging media coverage in the mainstream a sleeping giant has awakened.  Many people will no longer accept that what lines grocery store shelves is safe to eat.

We know that we have been sold out, betrayed by the politicians that were duly elected to represent the wishes of their constituencies. The day before the event, the US Senate shot down a bill that would have allowed individual states to require labeling of GMOs.  We are fighting a company with billions of dollars, links to the FDA, the USDA and the Supreme Court, and a whole bunch of sketchy politicians in their back pockets. They have fought a sneaky social media war against us, and will continue to pull out all the stops to marginalize the movement against them.

We have to keep the momentum going that we have achieved with the March Against Monsanto. Don’t let it end on May 25, 2013.  The only way to defeat Monsanto and the rest of the biotech industry is by spreading information far and wide. We clearly cannot rely on the mainstream media to do this, as evidenced above.  So we must use social media, alternative media, and word of mouth. Print off some labels and put them in the grocery store.  Organize your own pickets and hand out flyers in front of the grocery store, letting people know what they’re buying. Go to farmer’s markets and support your local growers. Sow the seeds of revolution by growing as much of your own food as possible.  Most of all, vote with your wallet and don’t buy ANYTHING that puts money into the pockets of companies that support GMOs or that fought against California’s Proposition 37, which would have called for the labeling of GMOs.