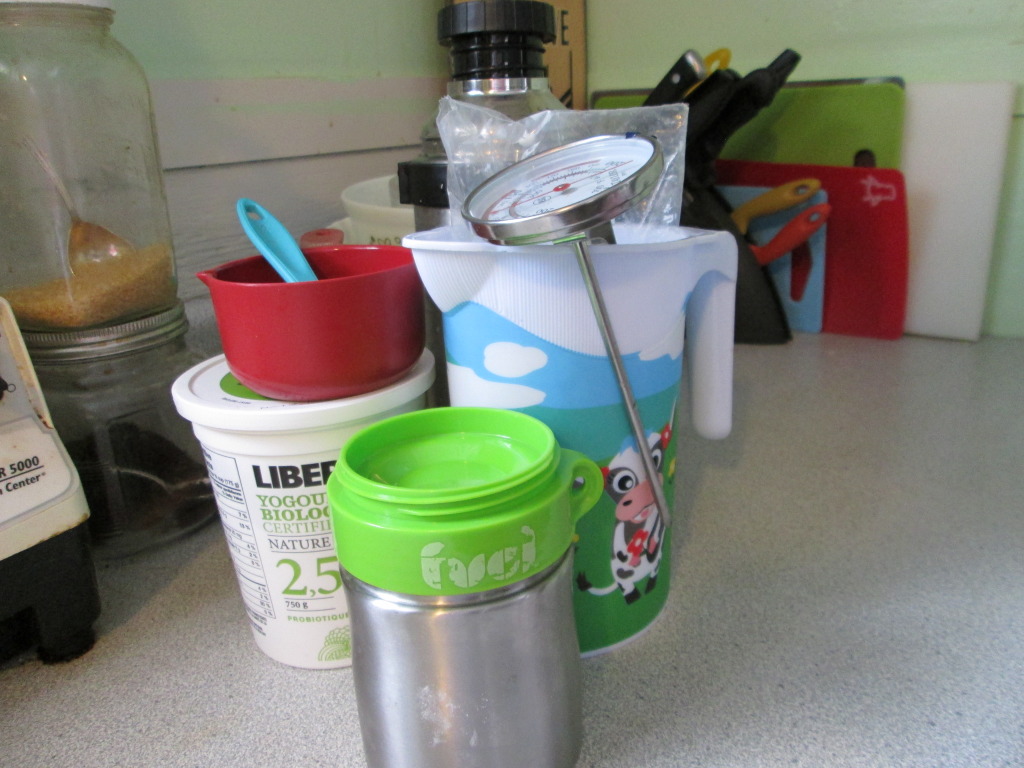 I was absolutely determined to make yogurt.  Real, yummy delicious yogurt, the nice thick kind that can stand on its own in a dish, supporting a big spoon full of fruit.

Yogurt has so many good things going for it!  I eat it almost daily and contribute my resistance to stomach viruses and my greatly improved acid-reflux to the habit.  You can read more about the benefits and some tasty ways to use it in my “Ode to Yogurt”.

Attempts 1 and 2 were made simultaneously.  The only difference between the two was that #1 was made from pasteurized milk from the dairy and #2 was made from reconstituted powdered milk.

I used the “thermos” method, found in detail HERE.

Basically, the thermos method is as follows.

You should get up to delicious, rich, thick yogurt.

I, however, did NOT get up to delicious, rich, thick yogurt.  I got up to runny, drink-it-through-a-straw yogurt.  I was seriously bummed.

I noticed, however, that the powdered milk yogurt was thicker than the refrigerated milk yogurt.  That got my wheels turning a little.

In the face of my early morning disappointment, I decided to try a few different things with the next batches.

I searched up “Why is my thermos yogurt runny?” and found this awesome site, Not Quite Nigella, had some interesting suggestions.

My next two batches were made from a cup and a half of milk from the fridge with 1/3 of powdered milk stirred into it. I was hoping that if the milk was thicker to start with, so too would be my yogurt.

I made another attempt at the thermos method, described above, with half of the mixture.

With the other half, I tried the blog’s “oven method.”

While my milk mixture was heating on the stovetop, I turned the oven on to 300 degrees F.

I washed a pint Mason jar and filled it with scalding hot water to keep it warm.

When the milk had been innoculated with the culture, I poured the half that didn’t go into the thermos into the empty, warm jar and placed it on a pan, popped it in the oven, and turned off the heat.  I left it in the warm oven for 5 hours.

Alas, it resulted in runny yogurt.

I had, at this point, reached my yogurt frustration threshold.  I spoke rather impolitely to the yogurt in the thermos, wrapped snugly in its towel.  I left the thermos on the stove while I baked a batch of cookies.  I turned on the oven a couple of times to keep things warm in the kitchen.  I strongly suspect my other failures are because my house is so chilly, a fact that is really only bothersome when making yogurt or waiting for bread to rise..

So, the keys to the successful batch of yogurt were…

Tomorrow I am planning to make a full batch of yogurt. I will let it sit for a solid 12 hours, and  I might try putting the thermos on a heating pad and turning it on intermittently throughout the day. I really want to keep it low-tech because yogurt making is a skill I’d like to be able to accomplish without the grid.
Share85
Tweet
Pin51
Share
136 Shares