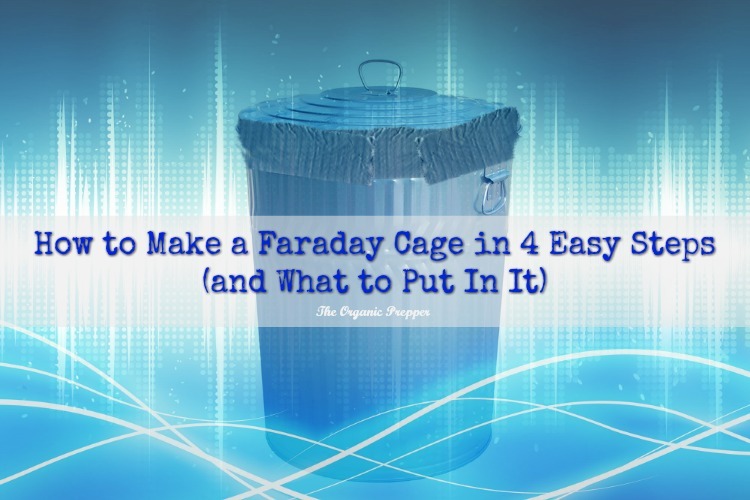 If you’ve been in the prepper world for long, you’ve probably read some horrifying books about what can happen after a disaster called an EMP.  And if you’ve done that, you know you need to protect vulnerable electronics. Today, we’ll talk about how to make a Faraday cage to do just that. Don’t worry – you won’t need a degree in physics to do this successfully.

First, let’s start off with a few important things to know.

What is an EMP?

“EMP” is short for electromagnetic pulse. It is a short burst of electromagnetic radiation that could come if a nuclear detonation occurred at very high altitude above us.

When a nuclear explosion occurs in space above a target, three types of electromagnetic pulses follow: E1, E2, and E3. An E1 pulse involves high-energy gamma rays colliding with air molecules nearly 20 miles above, then raining down electrons that get pulled in by Earth’s natural magnetic field. An E2 pulse comes from high-energy neutrons that get fired in every direction, and an E3 pulse occurs due to the size of the nuclear fireball itself affecting the Earth’s magnetic field. As nuclear physicist Dr. Yousaf Butt explains, these pulses affect everything in line of sight of the nuclear blast. For example, a blast at 60 miles up can affect a 700-mile radius on Earth. (source)

And by “affect everything” they mean everything with a circuit board. Your car. Your laptop. Your computerized medical devices. The power grid in general.  All of it.

This probably sounds like a sci-fi disaster movie – and it is like that. But it could happen. The Commission to Assess the Threat to the United States from Electromagnetic Pulse (EMP) Attack has warned Congress of the devastation that could follow such an event.  But for some reason, Congress defunded them last year.

At a House hearing yesterday, experts warned members of Congress that a North Korean EMP attack could kill 90% of Americans within one year, calling it an “existential threat.” But despite this looming crisis, the Department of Defense has decided now was the time to defund the Congressional committee that has been studying the threat since 2001. (source)

We’re talking about the deaths of more than 270 million people. Even mainstream sources have posted articles warning about this concern, particularly last fall when we were on edge about North Korea.

They have things set up where the military can continue to function, but it appears that the rest of us are on our own.

President Trump signed an Executive Order in May called “Strengthening the Cybersecurity of Federal Networks and Critical Infrastructure” which will hopefully harden our country against both cyber attacks and EMPs. The Commission provided a list of actionable suggestions on pages 11-14 of this report, but will the steps be undertaken before it’s too late? Especially now that they’re defunct.

It’s important to note that, although there are some differences, a very similar event could occur in the wake of a coronal mass ejection by the sun. Either of these possibilities could fry electronics in the affected area and completely change the world as we know it.  There are debates about exactly what would be affected – for example, some scientists say that only vehicles that are running would be affected, while others say if it has a circuit board, it’s history.

But for the purpose of this article, we’re going to assume that all of our electronics face total destruction.  Better safe than sorry, right? And that’s why you need a Faraday cage.

What is a Faraday cage?

A Faraday cage is a container that is made to protect its contents from an EMP or CME. It’s named after the original creator, Michael Faraday, an English physicist and chemist who lived from 1791-1857.

In his work on static electricity, Faraday demonstrated that the charge only resided on the exterior of a charged conductor, and exterior charge had no influence on anything enclosed within a conductor. This is because the exterior charges redistribute such that the interior fields due to them cancel (the Faraday cage principle).

To demonstrate his ideas, Faraday built in 1836 a room (the Faraday cage), coated with metal foil, and allowed high-voltage discharges from an electrostatic generator to strike the outside of the room. He used an electroscope to show that there was no excess electric charge on the inside of the room’s walls and volume.

The Faraday cage can be used to prevent the passage of electromagnetic waves and electric fields, either containing them in or excluding them from its interior space…

…Take notice that Faraday cages also shield the interior from external electromagnetic radiation, besides from electrical fields, if the conductor or wall is thick enough and any holes are significantly smaller than the radiation’s wavelength.

This shielding effect is used to protect electronic equipment from lightning strikes and other electrostatic discharges, for RF (radio frequency) shielding and for shielded telecommunication cables. (source)

So, more simply, a Faraday cage is a container in which you would house your most important electronics that would have some function in a world after our power grid was taken down. In a moment, we’ll talk about how to make them and test them.

Here’s an introduction to EMPs and Faraday cages by Dr. Arthur T. Bradley. Dr. Bradley is a scientist for NASA, the prolific author of The Survivalist series, and the author of Disaster Preparedness for EMP Attacks and Solar Storms, so he definitely knows that of which he speaks.

What should you put in a Faraday cage?

The answer to this will vary from family to family. Here are a few items to consider

Again, this list is not comprehensive – it’s just a few thoughts off the top of my head. My own Faraday cage won’t contain much more than the list above because my EMP survival plan is decidedly low-tech. If you’ve been following Anon 411’s information series, protecting that information is a must.

Where can you get a Faraday Cage?

There are a number of different ways to obtain something in which you can protect your electronics. You can buy them, which is the easiest way, but significantly more expensive. Keep in mind it’s always best to double up. For example, but your laptop in an EMP resistant bag and house that bag in your cage.

Here are a few of the things you can buy:

Then there are the EMP-resistant bags and cloths.

But…if you don’t want to spend this much money, you can also make a faraday cage yourself.

Very simply, you can make a Faraday cage using a metal container, then lining it with an insulating material so that the items inside do not have contact with the metal. It’s all about layers. I prefer to have 3 layers of protection.

Step 1) Select a container for your Faraday cage. Some ideas for the containers for the outer layer:

Here’s why you should NOT build your Faraday cage out of chicken wire.

Step 2) Line your container. Here are some ideas for the second layer:

The goal here is that nothing on the inside touches the metal of the container.

Step 3) Wrap up the contents before you put them in the cage. You will want to protect each item individually.

Step 4) Seal your container. Copper tape like this is widely believed to be the best method for sealing a Faraday cage to protect the contents. Dr. Bradley says that when testing Faraday cages his results have been just as good with less expensive aluminum foil tape.

Here’s a video that explains how to test your Faraday cage to see if you need to go back to the drawing board.

Here are some excellent resources where you can learn more about protecting electronics from an EMP.

Do you have a Faraday cage?

Here are some questions for discussion. Do you have a Faraday cage? What did you make it from? What do you keep in it? What are some important things about the necessity of a Faraday cage that you want to share with people?  Feel free to ask questions, too. If I can’t answer them, I can try and find the answer for you.