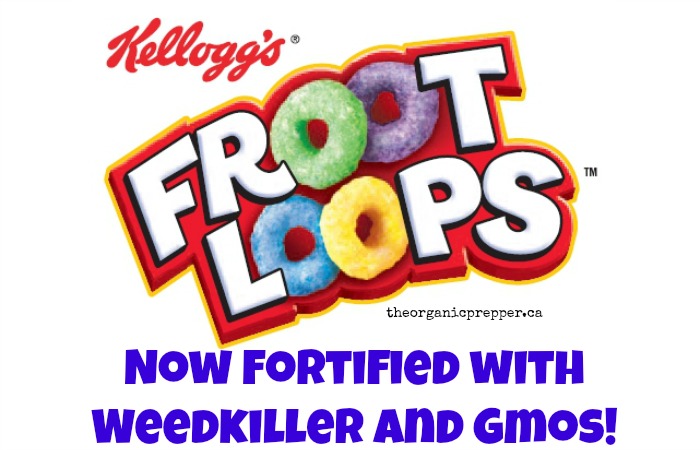 As if Froot Loops weren’t already a poor enough choice, with their sugar, dyes, and artificial flavors, (and no “froot” anywhere in sight) now, independent testing has shown that those ingredients aren’t the worst thing that Kelloggs is serving up. The cereal also contains Round-up herbicide (glyphosate) and genetically modified corn. Oh – and not just a little bit of GMO corn – it’s 100% GMO.

Is it any wonder we’re in the midst of a gigantic cancer cluster in this country? No wonder children have behavioral issues like ADHD.  No wonder people are fat, exhausted, and sick.

It’s no longer an exaggeration to say this stuff is poison. Now, it’s a proven fact.

For those who think the word “poison” is an exaggeration, let’s be clear on exactly what glyphosate is. It’s weedkiller. You spray it on weeds to kill them. There is irrefutable proof of toxicity and death from glyphosate. Two recent peer-reviewed studies confirm this.

And this is in cereal marketed to children with that big goofy cartoon toucan.There’s no fruit in these loops.

There’s no fruit in these loops.

The toucan, incidentally, says, “Follow your nose, it always knows.” If you want to follow your own nose to the blatant corruption, you need go no further than the stench of the fact that this is perfectly fine with the FDA, the USDA, and the EPA, those noble guardians of our health. So, if you trust them, don’t even worry about a little weedkiller in the cereal.

If you want to follow your own nose follow it to the blatant corruption that allows this kind of thing. You need go no further than the stench of the fact that this is perfectly fine with the FDA, the USDA, and the EPA, those noble guardians of our health. So, if you trust them, don’t even worry about a little weedkiller in the cereal.

As Mike Barrett of Natural Society points out, I guess now we know why Kelloggs has spent so much money to keep foods containing GMOs from being labeled as such.

There is a good reason that Kellogg’s spent over $1,012,552 on media propaganda in California & Washington to defeat voter ballot initiatives that would have required the labeling of GMO foods, and now are contributing again to the defeat of labeling initiatives in Oregon (contributing $250,000).

If your kids eat this stuff, in light of this information, it’s time to make a change to the breakfast menu. A bowl of modified corn and weed killer does not a healthy breakfast make. They might argue with you, and that’s fine. Pull rank. Of course they like it and think it tastes good. Chemists spent a lot of time and effort concocting a formula to make the cheapest, most toxic ingredients taste absolutely delicious. But the risk is too high to even consider this an occasional treat. I wouldn’t consider weedkiller acceptable, even in moderation.

If your kids insist that the day just can’t start without a bowl of cereal, don’t despair. There are many options out there that are far superior to anything from Kelloggs or General Mills. Forget about serving bowls of frankenfood and weedkiller and try one of these options instead:

Oatmeal: Your grandparents loved it and it’s still one of the healthiest breakfasts around. You can top this hot, filling meal with fruit, honey, syrup, nuts – the possibilities are endless.

Grits: As with anything made from corn, be sure you select an organic option

. The displaced Southerner in me loves a bowl of grits with butter, milk, and black pepper.

Cereal: One of my favorite kid-friendly brands is Envirokidz

. The organic choices are fun things like Chocolate Koala Crisps and Peanut Butter Panda Puffs. Definitely cool enough to make your tykes forget about Tony the Tiger and Toucan Sam.

Homemade granola: I absolutely love homemade granola, and so do my kids. This is one of my favorite recipes and the nice thing about granola is that you can easily adjust it to your family’s favorite flavors.

Other hot cereals: Nearly any grain can be turned into a hot cereal. Wheatberries are especially flavorful and filling. Many parts of the world make rice porridge by cooking rice in milk, then adding honey and cinnamon for flavor.

What are your favorite healthy breakfast cereals?

Does your family eat cereal for breakfast? What are your favorite alternatives to the toxin-filled conventional grocery store choices?