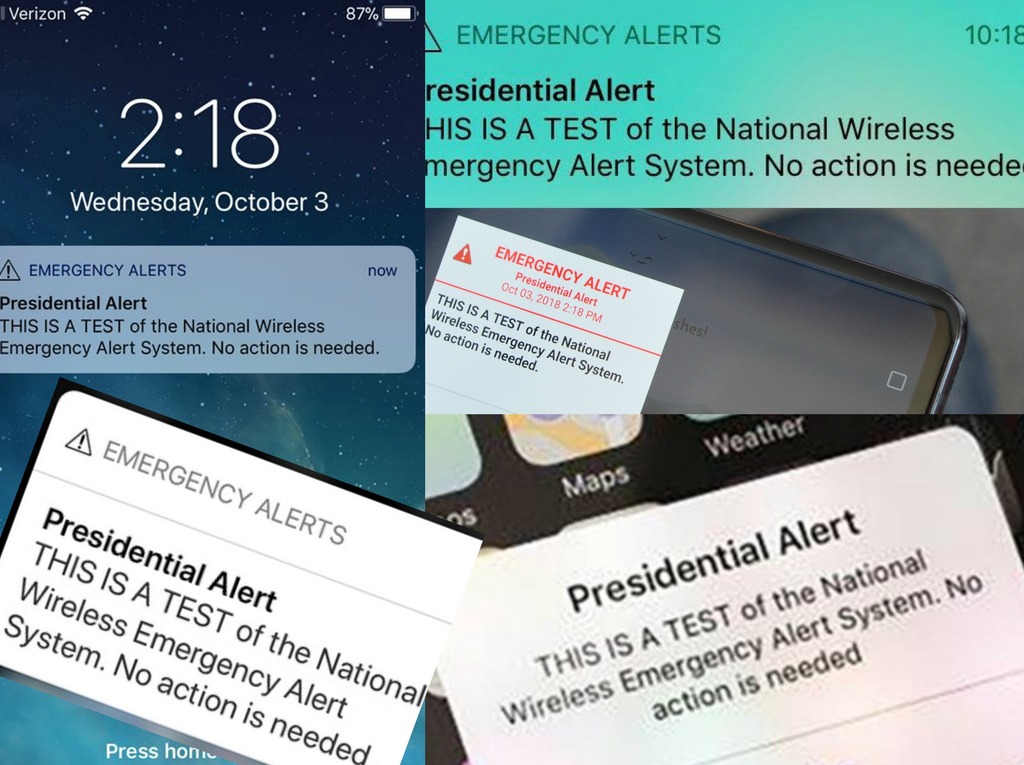 Yesterday, the first Presidential Alert was sent to phones all across the country. Theories and screenshots took over the internet shortly thereafter.

But one of these theories, in particular, comes from a source that is especially credible with regard to cybersecurity: John McAfee.

Let’s take a quick look at what other folks were saying before we get into McAfee’s assertion.

Before the alert ever came through, three people in New York were suing to stop it.

The activists filed the suit last week in U.S. District Court in Manhattan, arguing that the system violates their free speech rights and constitutes an unconstitutional seizure of their electronic devices…

…Wireless phone users have the ability to opt out of most alerts sent under the Integrated Public Alert and Warning System, run by the Federal Emergency Management Agency. While some users can choose not to receive regional messages and so-called Amber Alerts regarding missing or endangered children, under federal rules, receipt of the top-level “presidential alerts“ is mandatory.

In the new lawsuit, J.B. Nicholas, Kristine Rakowsky and Liane Nikitovich contend that the system will effectively turn them into “government loudspeakers” that would allow Trump or others to disseminate propaganda. (source)

Since the alert went out, it appears that their request for a preliminary injunction was not approved.

The motive behind their suit was political, as opposed to constitutional.

Nicholas, Rakowsky and Nikitovich accuse Trump of disseminating “weaponized disinformation” on Twitter and say they “don’t wish to receive text messages, or messages of any kind, on any topic or subject, from Defendant Trump.” (source)

And they weren’t the only ones who were “triggered” by the alert. All across social media, people bemoaned the fact that the wording was “Presidential Alert.”

Some people believe it was a coded message.

On the opposite side of the political spectrum, members of the group QAnon predicted this would be an announcement that Trump had defeated the “Deep State.”

They seem to be cheering for a martial-law-like purge of those who dissent against President Trump.

Some speculated that Trump would use the vehicle to announce the imminent confirmation of Supreme Court nominee Brett Kavanaugh, or the firing of Deputy Attorney General Rod Rosenstein, or even the broadcasting of arrests of high-ranking Democrats. (source)

When none of these things was forthcoming, QAnon believers consoled themselves with the belief that the whole thing was a coded message just for them.

Believers in QAnon—a conspiracy theory based on a series of internet clues posted by an anonymous character named “Q” that posits a world in which Trump and the military are engaged in ceaseless, secret war with globalist Democratic pedophiles—think the text could mark the start of “The Storm,” a fantastical MAGA dream in which Trump’s political enemies will be arrested and tried at military tribunals.

“That is how we will receive orders if all else fails,” wrote one QAnon believer on the 8Chan internet forum. “We are the next generation Minutemen! Standing by Sir!”

…QAnon diehards cheered it as the perfect way for Trump to test how to deliver earth-shattering news to the entire country. On the internet forum 8Chan, QAnon fans also noted that the test message was 17 words long—a significant number for believers in the conspiracy theory, because “Q” is the 17th letter of the alphabet.

…Others focused on the portion of the message that said “no action is needed,” which they saw as an echo of their motto: “Trust the plan.” That section of the test message, they believed, was a sign that Trump and the military are in control of the government and would soon settle all the country’s problems. (source)

Then there’s John McAfee’s theory about the Presidential Alert Test.

John McAfee had a different opinion about the Presidential Alert and it’s positively dystopian.

The "Presidential alerts": they are capable of accessing the E911 chip in your phones – giving them full access to your location, microphone, camera and every function of your phone. This not a rant, this is from me, still one of the leading cybersecurity experts. Wake up people!

And this theory has a lot more credibility because McAfee is, in fact, the big Kahuna of cybersecurity. McAfee is a British-American who is a computer programmer and entrepreneur. He created McAfee Antivirus back in the 80s, and though he sold his interest in the company, still keeps his finger on the pulse of cybersecurity and politics. He’s already announced that he’s taking a serious run at the 2020 presidential nomination on the Libertarian ticket.

In fact, McAfee is known as one of the top cyber security experts in the world. And he’s known for bluntly telling unpleasant truths that nobody wants to believe.

Few people are aware of the cybersecurity risks that surround them full time.

If you own a new Samsung TV, it’s likely constantly recording every word that is spoken in its vicinity, and these recordings are being sent to unnamed third parties.

If you own a car newer than two years old, chances are that hackers have already figured out how to take full control of it while you are driving down the highway. Last year, a brand new Jeep was hacked into by hackers hundreds of miles away and the Jeep was forced off the road by the hackers.

If you fly on an airplane that provides Internet access, hackers anywhere in the world can take control of the plane and alter its course and speed, and perhaps even bring it down.

Medical devices such as pacemakers, medical monitors, and other care-critical devices can be hacked into and patients placed into life-threatening situations.

Our mobile devices are ubiquitously used as spy devices by everyone from our NSA to bored hackers in Uzbekistan. (source)

And now he’s telling us that the Presidential Alert just unlocked access to all our phones.

Given his track record, I tend to believe him.

Do you think there’s something dark going on with the whole Presidential alert thing? Are you concerned about the security on your phone now? Did you have any issues after the alert?