Is There Lead in Your Water? 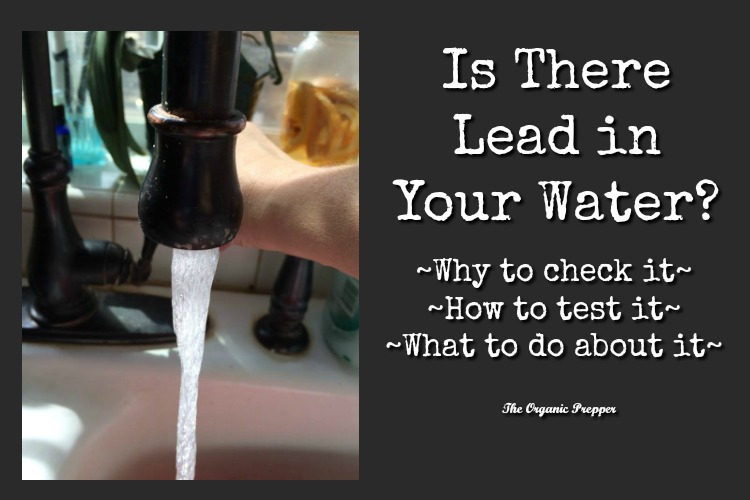 If nothing else, the water disaster in Flint, Michigan proved that we can’t just accept it when officials claim that a water source is safe for drinking and cooking. This terrible lesson has been repeated in many municipalities across the country, and the takeaway is undeniable. If you want to be sure that your tap water is free of lead, you must take responsibility into your own hands and test to see if there is lead in your water.

The problem didn’t end in poverty-stricken Flint, though.  In January, lead was discovered in the water of 21 different New Jersey school districts.

Just last week, lead was discovered in the tap water of a San Diego, California school when a service dog refused to drink it.  That’s right. A dog wouldn’t drink the water that kids were expected to drink. I know that my dogs will drink just about any water, including the stuff from the basin that the chickens pooped in and random mudholes. So, yeah, that’s pretty awful.

These are just a few examples. Unsafe levels of lead have been discovered in water supplies in Ohio,  Washington DC, North Carolina, and Mississippi. More than 5300 water districts have been found to be in violation of lead rules.

This isn’t just a localized issue. It’s everywhere, and as I wrote in my book, The Prepper’s Water Survival Guide, the onus is always on us to be certain that our families are drinking safe water. It’s clear by now that “officials” can’t always be trusted to a) test often enough and b) warn people instead of covering their own butts.

How does lead get into the drinking water?

The most common cause of lead in your water is old plumbing. If your home was built before 1986, it’s entirely possible you have lead plumbing. It’s also possible that the lead isn’t in your home’s plumbing but in the city’s water pipes.

But just the presence of lead, although unwelcome, isn’t enough to make it leach into the water. Generally, the leaching occurs when a) the pipe begins to break down due to age and wear or b) when there is something in the water that causes the lead to leach into the water. (This was the case in Flint. Due to budget cuts, they began processing water from the highly polluted Flint River.)

If stuff like this tickles your fancy, I wrote about municipal contamination at great length in my book, The Prepper’s Water Survival Guide.

What are the effects of drinking water that is tainted with lead?

If you have lead in your water, the most serious effects are to children under 5. The National Institute of Health reports:

Exposure to lead can have a wide range of effects on a child’s development and behavior. Blood lead levels less than 10 micrograms per deciliter (μg/dL) are associated with increased behavioral effects, delayed puberty, and decreases in hearing, cognitive performance, and postnatal growth or height.

Some of these health effects are found even at low blood lead levels less than 5 μg/dL, including lower IQ scores, decreased academic achievement, and increases in both behavioral problems and attention-related behaviors.

There is a wide range of lead associated behavioral effects in the area of attention. Attention deficit hyperactivity disorder (ADHD) is one example on the more severe end of the spectrum.

Older children and adults can also be subject to health issues from the ingestion of lead. The NIH report continues:

Blood lead levels below 10 μg/dL are associated with decreased kidney function and increases in blood pressure, hypertension, and incidence of essential tremor, a degenerative disorder of the central nervous system whose most recognizable feature is a tremor of the arms or hands during voluntary movements, such as eating and writing…

Pregnant women need to be particularly careful around lead. Maternal blood lead levels less than 5 μg/dL are associated with reduced fetal growth. Because the effects of lead are different for everyone, more research needs to be done to fully understand the health effects.

A 2004 study, supported by NIEHS, also showed that lifetime lead exposure may increase the risk of developing cataracts,3 a clouding of the eye lens resulting in partial loss of vision, which can be common in older people.

How do you test if there is lead in your water?

Testing for lead in your tap water can easily be done at home with a $30 test kit that is available from Amazon. The kit I’m recommending provides reliable results in 10 minutes. It’s calibrated to the EPA standards. (Not that I’m a huge fan of the EPA, but the standards for this particular topic are sound.)

The kit also tests for other contaminants that you definitely do not want in your water:

The test for lead is very easy to use and read. It reminded me of a pregnancy test. You have to use “first draw” water – so test what has been sitting in the pipes overnight. This will have the highest level of accumulated toxins. When you test, you’ll either get a positive or negative reading based on whether lead levels are below or above 15 ppb. (For something more specific, you’ll need professional testing done.)  The tests are one-time use only.

Depending on your situation, you may want to do additional testing at your office and your children’s school.

What should you do if there is lead in your water?

If you get a positive result, there are several steps you’ll want to take.

Next you’ll want to let your municipality know. While the problem could be within your home, it’s entirely possible that it’s a citywide issue and other people should be warned.

Now, what should you consume?

First, it’s important to note that boiling water can actually increase the concentration of lead, which means cooking with it infuses your food with lead.

Perhaps I’m overly cautious, but, if there was lead in my tap water, I would not use it for drinking or cooking.

However, if you are in a situation in which you can’t afford to buy or filter your water, the CDC recommends taking these steps if you discover there is lead in your water:

You should take the following steps any time you wish to use tap water for drinking or cooking, especially when the water has been off and sitting in the pipes for more than 6 hours. Please note that additional flushing is necessary:

a.Before using any tap water for drinking or cooking, run high-volume taps (such as your shower) on COLDfor 5 minutes or more;
b. Then, run the kitchen tap on COLD for 1–2 additional minutes;
c. Fill a clean container(s) with water from this tap. This water will be suitable for drinking, cooking, preparation of baby formula, or other consumption. To conserve water, collect multiple containers of water at once (after you have fully flushed the water from the tap as described).

If there is a pregnant woman or if there are children in the house, I strongly urge you to find another option for drinking and cooking water, as the risk for health concerns is great.

If you’re getting bottled water, check here to see if it meets NSF standards of purity. (Some companies literally bottle the same water you are getting from the kitchen sink.)

First of all, those little jugs that you refill from your tap aren’t going to cut it if you have lead in your water.

Luckily, there are filtration systems that can remove more than 95% of the lead. (Again, if you have people at high risk for lead-related health issues, 95% may not be acceptable.)

Three of the more expensive systems:

Other devices attach right to your faucet. These must be replaced after approximately 100 gallons.

Remember that if you have a fridge that dispenses water, you need to filter that too, in the presence of lead.

You really need to test your water.

This is a widespread issue with serious effects. I can’t recommend strongly enough that you take the responsibility upon yourself to test your water. We’ve seen repeatedly what happens when people rely on officials to keep them safe.