Is CBD the Answer to the Rise in Antibiotic-Resistant Bacteria Like MRSA? 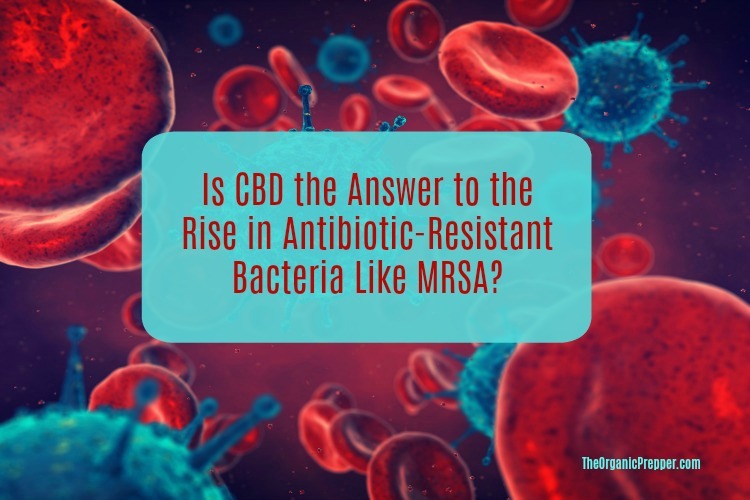 As public health organizations issue dire warnings about the rising threat of antibiotic-resistant superbugs, a surprising hero may rush in just in time to save the day. A new study has found that cannabidiol (commonly known as CBD) is remarkably effective at killing a wide range of Gram-positive bacteria.

Antibiotics have saved millions of lives since their widespread use began many decades ago. Infections that were once a death sentence were easily treated with the medications.

Unfortunately, many antibiotics are now becoming ineffective because bacteria have become resistant to the drugs – they have mutated into “superbugs” that are becoming nearly impossible to treat.

Thankfully, CBD may offer a solution.

Before we talk about the antibiotic properties of CBD, here’s a brief overview of the substance and how it works.

What is CBD and how does it work?

Cannabidiol, or CBD, is a non-intoxicating natural medicine that is derived from the Cannabis sativa plant.

Cannabis sativa plants contain much more than cannabidiol: they are rich in phytotherapeutic agents, including Tetrahydrocannabinol (THC), terpenes, and phenolic compounds.

While people (and their animal companions) are finding CBD provides them with relief for a wide range of ailments including arthritis, chronic pain, gastrointestinal problems, and sleep troubles, one area in which CBD may become a true lifesaver is as a treatment for drug-resistant infections.

Research on the medicinal properties of cannabis plants began back in the 1940s, but its history of use goes back thousands of years – cannabis was one of the first plants to be used as medicine. The war on drugs is largely responsible for delays in research – and delays in widespread access to this incredible plant.

Finally, legalization is spreading, and more and more people are experiencing the therapeutic properties of CBD.

We are big fans of CBD around here, and we recommend Organica Naturals CBD products for their consistently high quality.

Recently, the World Health Organization predicted that worldwide death rates from drug-resistant microbes will climb from the current 700,000 per year to 10 million by 2050. At that point, they will have surpassed cancer, heart disease, and diabetes to become the main cause of death in the human race.

Antibiotic resistance is one of the biggest health threats of our time, according to the Centers for Disease Control and Prevention (CDC):

Antibiotic resistance has the potential to affect people at any stage of life, as well as the healthcare, veterinary, and agriculture industries, making it one of the world’s most urgent public health problems.

Each year in the U.S., at least 2 million people are infected with antibiotic-resistant bacteria, and at least 23,000 people die as a result. (source)

Scientists are running out of ways to treat infections.

In response to the growing number of bugs that are drug-resistant, scientists are learning to identify and isolate them in hopes of preventing large outbreaks. They are also making efforts to tighten up the use of antibiotics in an effort to slow the development of resistant strains, but many experts say it is too late, and that these actions will only buy us a little time, as we explained in WHO’s 2050 Prediction: 10 Million People Could Die from Mutated Superbugs And We’ll Have No Drugs to Fight Them:

There isn’t much incentive to develop new antibiotics, mainly because the development of one new antibiotic costs about $2 billion and takes about 10 years, and the likelihood of drug companies making a profit on such drugs is low.

At the moment, the oldest and weakest patients in hospitals are most affected, but the risks are spreading. “We’re seeing healthy young people with urinary tract and skin infections that we don’t have a pill for,” says Helen Boucher, an infectious disease specialist at Tufts Medical Center in Boston. “And we may not be able to perform organ transplants, and even routine surgeries like joint replacements. We should all be scared.”

Researchers are looking into antibiotic alternatives, including the use of special soaps and infection control techniques, treatment with genetically-modified viruses called bacteriophages that are a natural enemy of bacteria, and other non-antibiotic treatments. (source)

Just as antibiotic overuse has contributed to the rise of resistant bacteria, overuse of antimicrobial drugs is helping fungi becoming resistant. Treatment-resistant versions of the fungus Candida auris have been occurring across the world. Last May, an elderly man became infected and doctors were not able to save him. Research on CBD has shown the substance has antifungal properties, so perhaps it will be widely used to treat these kinds of infections in the future.

Clearly, we need solutions, and we may find them in cannabis medicine.

Could CBD be the answer?

The new study found that CBD is “remarkably effective” at killing certain types of bacteria. The results showed that CBD had antibiotic effects against a wide range of Gram-positive bacteria, including types of staph and strep bacteria, as well as strains that had become resistant to other antibiotic drugs.

In a press release, study lead author Dr. Mark Blaskovich, of The University of Queensland’s Institute for Molecular Bioscience’s Centre for Superbug Solutions in Brisbane, Australia, said of the findings:

“Given cannabidiol’s documented anti-inflammatory effects, existing safety data in humans, and potential for varied delivery routes, it is a promising new antibiotic worth further investigation. The combination of inherent antimicrobial activity and potential to reduce damage caused by the inflammatory response to infections is particularly attractive.” (source)

Here’s more from the press release:

Cannabidiol had a similar potency to established antibiotics such as vancomycin and daptomycin, and did not lose effectiveness after extended treatment.

Importantly, the drug retained its activity against bacteria that have become highly resistant to other common antibiotics. Under extended exposure conditions that lead to resistance against the antibiotics vancomycin or daptomycin, cannabidiol did not lose effectiveness.

It was also effective at disrupting biofilms, a physical form of bacteria growth that leads to difficult-to-treat infections. (source)

This research was not the first to demonstrate CBD’s bacteria-fighting properties. Two previous studies showed that CBD may be effective against a killer infection: Methicillin-resistant Staphylococcus Aureus, or MRSA.

Project CBD describes the findings of one of those studies in Bug Off! A True Story About CBD & MRSA:

A 2008 study in the Journal of Natural Products, published by the American Chemical Society, found that cannabidiol (CBD) and cannabigerol (CBG), two nonintoxicating cannabinoids, “showed potent activity against a variety of MRSA strains.” Three other plant cannabinoids – tetrahydrocannabinol (THC), cannabinol (CBN) and cannabichromene (CBC) – also showed encouraging results in preclinical research. How the cannabinoids work is not fully understood, but it appears to be due to natural antimicrobial defense mechanisms.

The journal concluded: “Given the availability of C. sativa strains producing high concentrations of nonpsychotropic cannabinoids, this plant represents an interesting source of antibacterial agents to address the problem of multidrug resistance in MRSA and other pathogenic bacteria. This issue has enormous clinical implications, since MRSA is spreading throughout the world and, in the United States, currently accounts for more deaths each year than AIDS. Although the use of cannabinoids as systemic antibacterial agents awaits rigorous clinical trials … their topical application to reduce skin colonization by MRSA seems promising.” (source)

While research on CBD as a treatment for serious infections is in the early stages, the mounting scientific evidence showing the compound’s powerful antifungal, antiviral, and antibacterial properties is promising.

Raphael Mechoulam, PhD, has been studying cannabis plants for more than 50 years (he is the scientist who isolated THC way back in 1964). In a 2005 paper, he wrote, “I sincerely believe that the plant cannabinoids are a neglected pharmacological treasure trove.” It appears that Dr. Mechoulam was way ahead of his time, and research is finally catching up with his prediction.

An important note: Nothing in this article should be considered medical advice. This guide is for informational purposes only. CBD is a very safe substance and is generally well tolerated. However, it can interfere with certain medications. Please consult with your healthcare practitioner before taking CBD, especially if you are taking medication or have serious health concerns.

To learn more about the latest in CBD research, go here to read our articles.

Is CBD something you already use or keep on hand just in case your family needs it? Do you think it is worth having in your arsenal of emergency supplies? Please share your thoughts in the comments.

Lisa Egan has been passionate about nutrition and fitness for over 20 years. She holds a Bachelor of Science in Health Sciences with a minor in Nutrition. She is the owner of the website All About Habits.