Instead of Providing “Safe Spaces” This University Teaches Survival Skills 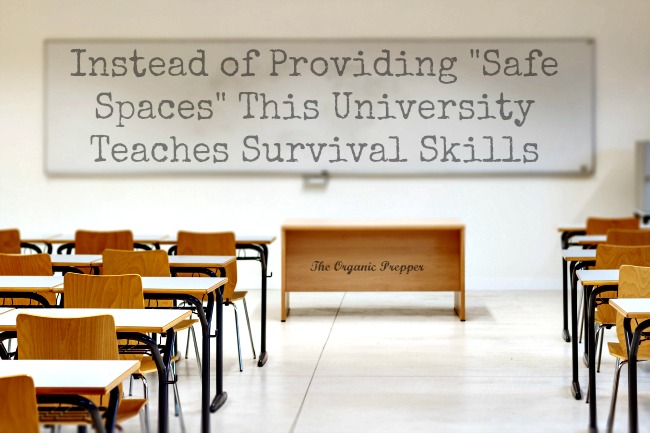 Once upon a time, the goal of higher education was to prepare kids for life, but in past decades they’ve gotten further and further from that path. Now, in an era of crybabies and safe spaces, one university teaches survival skills and is completely bucking the status quo.

Frostburg State University has a freshman-level interdisciplinary course called Doomsday Preppers and Surviving the Unexpected Emergency, playing off the popularity of the National Geographic Channel’s show of the same name. In the class, Recreation and Parks Management Professor Robert Kauffman teaches disaster preparedness to help the kids get ready for a variety of scenarios. Kauffman is the author of a paper about “the rescue curve” that discusses the point at which injury, damage or loss can increase as time between an incident and an intervention increases. The class is now in its second semester of preparing students for emergencies, and the professor plans to continue it next year. Here’s a little bit more about the course:

In Kauffman’s class, he uses clips from “Castaway” and “Blast From the Past” among others to augment his examples of the psychological and physical effects of disaster preparedness.

As January’s snowstorm demonstrated, these skills come in handy whether stranded on a highway or isolated in your neighborhood.

Among the assignments in IDIS 150, students have to plan for short-term disasters and one-year disasters, take inventory of their food at home, design a shelter, determine how much in supplies and food they need, organize communication tools and, yes, learn how to prep for life in an underground bunker. But it’s the more likely scenarios that Kauffman really hopes the students will be prepared for.

“It is a reprocessing of your camping skills. Really, what we did is take the old-fashioned camping course and repackaged it,” Kauffman said. “The real emphasis is surviving the unexpected emergency we could be thrust into anytime, our car breaking down on the road, being stranded at a rest stop, or we just had a storm where people were stranded for three days.”

Ebersole, of New Enterprise, Pa., found the course helpful for when he goes hunting in the winter. He now makes sure he has an extra coat and supplies in his car for unexpected situations. It was a simple exercise in class that showed him why it’s important to have extra supplies.

“We pulled out everything from our pockets, and whatever you had with you at the time is what you’ll have during an emergency,” he said.

He also was well-prepared for the January snowstorm in part thanks to the class, having stocked up on enough food and supplies to make it until his neighborhood’s streets were cleared.

These kids are being prepared for actual life, toughening up by considering the possibilities, and gaining the confidence that comes from being ready to meet challenges.

This is in sharp contrast to what many colleges are teaching these days. Instead of nurturing competent kids into adults that can go out and conquer the world, they’re wrapping them in cotton and turning them into wusses who require shelter from mean words.

Just last week, Rutgers University was the scene of a dramatic protest with an aftermath that required trauma counseling. If you’re wondering what awful thing happened, there was a guest lecturer who hurt some of the students feelings. In protest, they smeared blood on their faces, because words. Words had wounded them.

Afterward, they had to seek help in a group therapy session to deal with the trauma of listening to another opinion. Many students said in the aftermath that they were fearful as they slunk around the campus for days after the event.

Protesters at the University of Missouri required a “safe space” to recuperate from the rigors of protesting, in which no one could say mean things to them and the media couldn’t report on them.

So unbelievably gutless are many young adults that numerous guides have been written about how to keep from offending, treading upon, or discriminating against anyone. (You can see a list of these guides here so you can follow the new rules of conduct.)

Matthew McConaughey gave the 2015 commencement speech at the University of Houston, and may not be invited back. ““Life’s not fair. It never was, isn’t now and won’t ever be. Do not fall into the entitled trap of feeling like you’re a victim. You are not.”

What do you think kids should be learning to prepare them for adult life?

If we really wanted kids to be prepared for an adult life full of accomplishments and freedom, we’d teach them that overcoming obstacles is the route to success, not hiding under your blankie. Never have I seen it so well said than in this essay by a combat veteran Marine.

If you were designing a course for life for kids stepping into adulthood, what would that course teach? Disaster preparedness? How to handle your finances? How to budget? Home economics? Shop? It seems that none of these things is included in education anymore, and we’re sending kids out into the world completely unprepared, deeply in debt, and unable to find employment.

No longer do youngsters seek adventure and live to tell the tale (at least not without someone getting arrested or taken away by CPS). Helicopter parenting and “higher education” are lowering the thresholds of common sense and, well, cajones. These coddled, wimpy kids could be the sensitive future leaders of our country, an alarming thought at best.

The course at Frostburg is a refreshing change from the tripe we’re seeing in the news from other colleges. I would much rather send my kids to a place where the headline is “University Teaches Survival Skills” than one that says “University Creates Safe Spaces for Word-Wounded Students.”