According to the Wall Street Journal, Inflation Is About to Increase the Prices of EVERYTHING 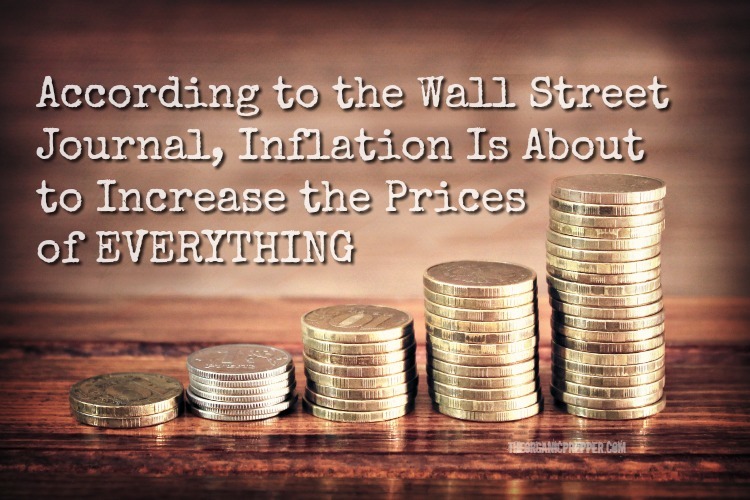 We’ve been pretty lucky over the last ten years in terms of inflation, which has remained at about 2%. However, if the Wall Street Journal is correct, our luck is about to run out.

The price of just about everything is set to increase in the coming months. Part of this is because manufacturers and suppliers are facing rising costs, just like the rest of us.

Airlines are paying about 40% more for jet fuel than they were a year ago. Trucking costs were up 7% annually in September, as trucking companies passed along their own higher labor costs. Private-sector wages and salaries in the September-ended quarter rose 3.1% from a year earlier, the strongest gain since 2008, the Labor Department said Wednesday.

Meanwhile, U.S. manufacturers are paying roughly 8% more for aluminum and 38% more for steel than a year ago as the industry adjusts to tariffs the Trump administration levied on imports of those metals. Also, a 10% tariff the administration imposed in September on $200 billion worth of various goods from China is weighing on businesses that buy those imports. (source)

With that being the case, it isn’t surprising that those costs will be passed on to consumers.

Here are some basic facts about inflation from Investopedia.

No matter what your spending habits are, you’ll see the effects if we face the kind of inflation that is being predicted by the WSJ.

The problem is, consumers are barely getting by as it is.

Despite reports of a burgeoning economy, the picture that a lot of us are seeing isn’t quite so rosy. Lots of middle-class families are truly struggling to get by as the cost of living increases but wages remain stagnant.  Michael Snyder wrote on his website, The End of the American Dream, that 62% of all jobs don’t pay enough to support a middle-class lifestyle.

According to a shocking new study that was just released, 62 percent of all jobs in the United States do not pay enough to support a middle class life.  That means that “the American Dream” is truly out of reach for most of the country at this point.  Today, Americans are working harder than ever but the cost of living continues to rise much faster than our paychecks are increasing.

Earlier this month, I went and looked at the latest numbers from the Social Security Administration, and I discovered that 50 percent of all American workers make less than $30,533 a year.  But that is just above poverty level.  In fact, the federal poverty level for a family of five is currently $29,420.  Most families are just barely scraping by from month to month, and most U.S. workers are just one major setback away from falling out of the middle class…

…We have been told that the economy has been “booming” in recent years, but the truth is that it has only been booming for people at the very top of the pyramid. (source)

But it really gets even worse than that. It goes far beyond not being able to go on vacations or dine out occasionally. Almost half of all Americans can’t even afford to pay for both food and rent in the same month.

And now, with burgeoning inflation headed our way, those who have been barely getting by are going to start seeing a serious decline in their lifestyles.

Here are some examples of the inflation we’re about to see.

These are some of the companies that are planning to raise prices in 2019 (or have just recently raised their prices) to cover growing costs and boost profits, via the WSJ.

Prices have already been rising for dining out

The price of dining out has already been increasing at lower-priced outlets. Here’s how much the cost of the following items increased in the 3rd quarter of this year compared to the same time last year:

Americans already spend an obscene amount on eating outside of the home each year. Zero Hedge recently reported of Q3, “…if one combines the data from the most recent two quarters, the contribution from eating at restaurants is the highest going back all the way to 1992.”

Other things with correlation to inflation

Inflation on its own isn’t going to destroy the economy, but it is often a precursor of negative things to come.

For example, you often see an increase in unemployment that goes hand in hand with inflation.

The Federal Reserve generally monkeys around with interest rates during an inflationary period as well.

This means it will be a lot pricier for people to buy homes and cars because their monthly payments will go up due to rising interest rates. Those items high-ticket items purchased during an inflationary period will cost the buyer far more than they would if purchased during better economic times.

How does an everyday middle-class family battle inflation?

It’s the same thing I’ve said over and over. As things get rough economically in our country, those who make the switch from being a consumer to being a producer will fare much better.

When you look at the prices of the things that are about to be affected, there are a lot of those items you just don’t need. Storebought crackers, fancy purses, dinner out? They aren’t essential. But don’t be deceived into thinking that inflation won’t affect you directly.

Those won’t be the only prices you see going up – I’m pretty certain we’re going to see inflation across the board, sort of a cascading effect.  Everything which must be transported (so, basically everything that isn’t produced locally) is going to go up. Everything imported is going to go up. Small businesses will have to raise their prices to be able to afford to pay for the things in which the price is going up. Interest rates will make buying homes and cars out of reach for many Americans – even more so than those dreams are now.

The key is production.

This is so simple that it seems ridiculous, but it’s how you survive rampant inflation and economic crises. You reduce your dependence on the consumption that has become the American way.

The more things you can provide for yourself, the more money you have left for the things you cannot make on your own. So, we’ll be talking a lot more about DIY and frugality on this website, because those are the survival skills you need to get through the inflation and poor economy that is headed our way. Be sure to go participate in the forum and join the discussions on DIYs, frugality, and the economy.

What will you do to fight inflation?