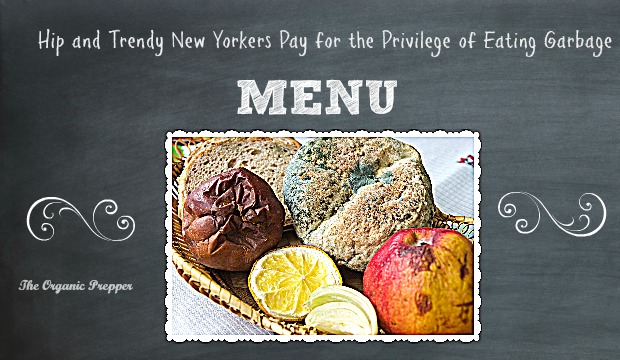 A hip and trendy new restaurant in New York City has the rich folks all excited. The restaurant, called wastED, serves the things that most people throw out.

And I’m not completely sure how I feel about this.  There’s an absolutely staggering amount of food wasted

in the United States, but this is a rather extreme, artsy take on the problem.

First, the thrifty side of me rejoices in thinking of ways to use up every last bit of food. I always cook down carcasses to make broth, in lean times, had a freezer bucket full of odd bits of leftovers for some future soup, and last year made candy out of peach peels. The idea of a fancy-dancy chef doing the same thing and calling it gourmet makes me feel a bit less like an oddball.

But on the other hand, is this just a statement about the impending financial doom we’re heading towards?  Can we look forward to rummaging through the trash to find our food, or trying to make dressing-soaked salad ingredients palatable the next day?

Either way, someone is an absolute marketing genius. Here are some of the things the cool urban dwellers are gobbling up for $15 per plate:

Much of the above sounds like the stuff I’d feed the chickens, the pigs, or my dog, but I probably wouldn’t give most of those items to my family. The suggestion that we learn to do so seems sort of Agenda 21ish to me.  I can pretty much guarantee the wealthy won’t be dumpster diving for fish heads anytime soon, but they seem to be trying to prove that it’s just fine for the rest of us.

Of course, this was all a grand experiment, basically performance art that left privileged West Village New Yorkers feeling very risque and avant garde. The restaurant was temporary, operating for only three weeks, during which time over 10,000 meals were served with such unlikely ingredients as:

Here’s what the breathless reviews had to say (and you can roll your eyes. I did.):

For the most part, the reviews were positive—if not concerning the food, then at least the idea. The New Yorker declared the bony monkfish meat to be “juicier than even the best fried chicken,” and that overall, “Ordering horrible-sounding things that turned out to be delicious was a bizarre but exhilarating adventure.” Architectural Digest noted that the décor consisted of repurposed and discarded materials, resulting in the overall effect of “having dinner in an extremely chic construction site, albeit one with perfect mood lighting that’s enhanced by beef tallow candles.” A Fast Company writer had fun ordering “dishes that sounded like blue plate specials for Oscar the Grouch,” though ultimately admitted she wouldn’t actively seek out anything that was on the menu.

“I don’t believe I’ve ever been in a Manhattan restaurant where so many people appeared so enthralled, so thrilled,” wrote GQ‘s Alan Richman. (source)

It’s one thing to be a creative cook and use everything possible, but quite another to eat “garbage” as an adventurous evening out. Wouldn’t the hunger problem be better solved by actually feeding poor people who have no food, instead of glamorizing the contents of the average restaurant dumpster? It’s actually kind of insulting and pretentious, and will easily lead to a “let them eat cake” mentality.  I can just imagine the next dinner party in a posh penthouse apartment with a view of the park, when Biff says to Buffy,  “I don’t know what those homeless people are complaining about. I myself have eaten fish heads and potato scraps, and it was absolutely delicious. Every bit as good as this lobster, caviar, and champagne.”

In a restaurant-driven city like New York, where most people order take-out or go to restaurants for every single meal, will anyone who dined there actually go home, prepare food from scraps, and become less wasteful? Or will food from garbage become the next Soylent Green to appear on grocery store shelves, right alongside the processed chemistry projects that lurk there?

Oh, yeah. That. It’s probably no surprise that Silicon Valley entrepreneurs are all over the idea of making tons of money from food that is normally considered inedible. Our financial problems are their financial boons. You can read all about it here.

One thing is certain: with the drought in California all but eliminating food production from the country’s largest supplier of produce and brutal, long winters across the rest of the country hampering the ability to make up for that, we’re looking at a near future of wildly escalating prices at the grocery store. We will all have to be a little more creative

to put dinner on the table if things continue on their current track.

Hat tip to the awesome reader who sent this in!