Venezuela Shows Us What an Electricity Shortage Looks Like 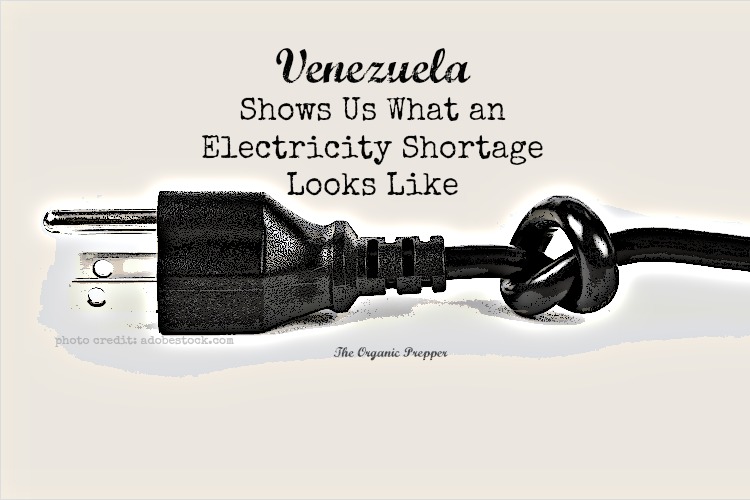 The SHTF might be a lot more subtle than an EMP or a massive natural disaster. We preppers tend to think in black and white, but there are some gray threats out there that few are considering. What if, instead of a total power outage, our country suffered a serious electricity shortage?

That’s exactly what has been going on in Venezuela, since they don’t have enough problems running out of food and other supplies in a previous development of the excruciating economic collapse of the country.

In the latest installment of collapse propaganda, bus-driver-turned-Venezuelan-President Nicholas Maduro offered some beauty advice. He wants the women of Venezuela to stop using hair dryers to save electricity aside from special occasions. He said, “I always think a woman looks better when she just runs her fingers through her hair and lets it dry naturally. It’s just an idea I have.”

This sage advice came along with announcements of further cuts and suggestions. State employees will now have Fridays off for at least the next two months, and he also recommended that citizens make small changes, like “embracing the tropical heat and hanging clothes out to dry instead of using tumble dryers.” (source)

The electricity shortage has been going on for almost a year.

This isn’t a new issue, but a worsening one. In May of 2015, they tried to sugar coat the rationing of electricity by saying they were just being green. Vice President Vice President Jorge Arreaza explained:

When the electricity concern began, public employees saw their work hours cut to 6 per day.Businesses were required to reduce their usage by 10% and new laws permitted police visits to inspect the businesses to ensure that they weren’t exceeding their allotments.

In February, citizens who were already facing shortages and long lines for items like cooking oil, laundry soap, diapers, and food were absolutely stunned when shopping centers were forced to shut off power from 1:00 to 3:00 pm and again from 7:00 to 9:00 pm in a measure to save electricity.

The rationing in Venezuela is a cautionary tale.

Here’s why we need to pay attention to what’s going on in Venezuela: It provides a modern day glimpse into what an economic collapse really looks like, much like the collapse of Greece was a cautionary tale. These are both direct case studies of what happens to the middle class during an economic collapse.

Previously, I wrote about how it could happen here. (Excerpt)

However it goes down you can be sure that no one in the government will admit to mismanagement or a desire to enhance control and dependency. It will be couched in warm, fuzzy terms of saving the planet from carbon emissions, much like the propaganda coming out of Venezuela.  It’s easy for us to see it when it happens to them, but many people here are so deeply entrenched in cognitive dissonance that they’ll swallow the green pill with a smile, moving into theirAgenda 21 microhomes and martyring themselves for the good of Team Green. (Find the original article HERE)

So…what if electricity was only for rich people?

It’s not that far-fetched, and if you don’t fall into the category of “rich people” it is definitely something you should prepare for.

What if the Big Event isn’t an EMP, but that no one could afford to pay the electric bill?  Power prices are going up – what if they rise to the point that it’s a choice between food and electricity?  What if the lights in the middle-class neighborhoods just start going out?

Let’s face it, if you really had to pick, you’d choose to feed your kids over having the lights on, right?

What a control mechanism that would be.

What better way to return to a “Lords and Serfs” lifestyle than the strong visible delineation of who has power and who does not?

The rationing of electricity or the lack of affordability would change life as we know it. Our society is incredibly dependent on the power grid, not only to keep us comfortable, but also to keep us entertained. We’ve grown soft.  As well, we depend on others having access to electricity to make our lives easier by keeping us fed and clothed, and by making the things we purchase easily accessible to us.

Here’s how to maintain your independence throughout an electricity shortage.

You don’t have to return to serfdom, though. The steps you take and the things you learn now can help you overcome any hardships presented by the lack of affordable “necessities.”

Learn to provide your own food.

If the stores are closed or supplies are limited because manufacturing plants can’t produce food, you’ll have to provide for yourself.

For more self-reliance information, be sure to check out this round-up manifesto with more than 300 resources!

Reduce your dependence on the power grid and use less.

If prices skyrocket, there are lots of things you can do to cut your usage. Before anyone starts arguing that this is “caving in” to the demands of those who are rationing power, (because there’s always someone who says that) sometimes it’s a matter of personal economic survival. Whoever survives, wins.

If it’s a matter of the price of power skyrocketing, your ability to use minimal electricity may allow you to still afford to use a freezer, a laptop, or a medical device. It only makes sense that the less dependent on the grid you are, the less you will be affected by a shortage.

Find other ways to stay warm.

If you can’t afford to run your central heat, it’s important to have back-up methods for staying warm.

Methods that use fuel:

If you have no secondary heat source, no fuel, or limited fuel, the following options can help.

An electricity shortage doesn’t end with lack of lights at the flick of a switch. It can have very broad ramifications, such as a harsh cutback on manufacturing, transportation, and retail outlets. Make sure you have your preps in order with long-term emergency food, a well-stocked pantry, back-up plans, and non-food necessities. Take lessons from the way folks survived the last Great Depression and use their hard-won wisdom to survive the next one.

The great thing about prepping is that your general efforts will see you through a wide variety of disasters, even those which gradually creep up on you, like energy shortages.

Do you have any suggestions about reducing your reliance on the utility system? How would you foresee an electricity shortage affecting the average person? Share your insights in the comments below!