Is a Grand Solar Minimum Something We Should Worry About? Is Another “Little Ice Age” Approaching? 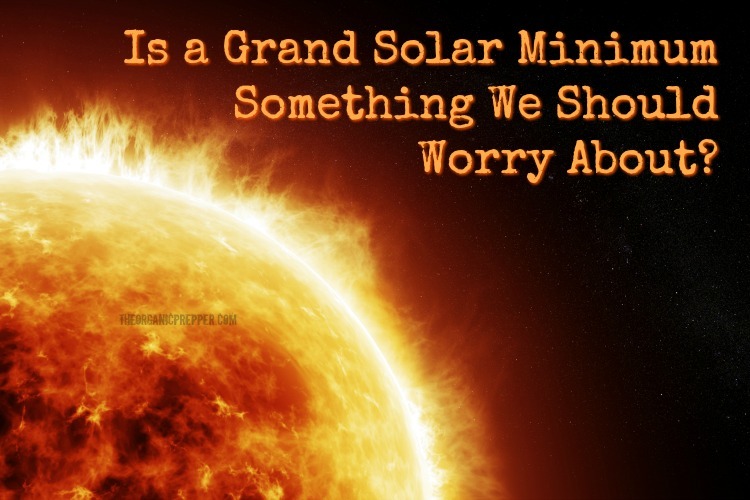 You may have recently heard the term grand solar minimum and Maunder minimum bandied around by the media lately, but what the heck are they talking about? And should we be worried about another Little Ice Age approaching?

Well, there are two types of solar minimum. One of them ordinarily happens about every eleven years. In the simplest terms, a solar minimum phase is a period of time in which the sun’s activity is reduced to its lowest level and there are very few sunspots.

Well, there are two types of solar minimum. One of them ordinarily happens about every eleven years. In the simplest terms, a solar minimum phase is a period of time in which the sun’s activity is reduced to its lowest level and there are very few sunspots.

The sun is incredibly active. Most of the time, anyway.

Properly-filtered telescopes reveal a fiery disk often speckled with dark sunspots. Sunspots are strongly magnetized, and they crackle with solar flares—magnetic explosions that illuminate Earth with flashes of X-rays and extreme ultraviolet radiation. The sun is a seething mass of activity.

Until it’s not. Every 11 years or so, sunspots fade away, bringing a period of relative calm.

NASA predicts that the next solar minimum will be during 2019-2020. An ordinary solar minimum phase can have effects like geomagnetic storms, auroras, and disruptions to communications and navigation systems.

All in all, it’s nothing catastrophic, although solar minimums have been linked to colder and more eventful winters.

The strength of the solar cycle is not expected to have noticeable effects on the weather, but research has shown that during the solar minimum, which we are in now, we tend to see more zones of high pressure at the high altitudes, which tend to slow down the progress of weather systems.

For example, research has shown strong high pressure over Greenland, sometimes called the Greenland Block, is more prevalent during solar minimums. Greenland Blocks are known to favor periods of cold, snowy weather in the eastern United States and during winter.

During the last solar minimum in 2010, a measure of the strength of the Greenland Block, known as the negative phase of the North Atlantic Oscillation, hit a record low. “It was pretty impressive during that window,” said Capital Weather Gang’s Matt Rogers, a long-range forecasting specialist.

The last solar minimum coincided with the snowiest winter on record in Washington, in 2009-2010. (source)

But a GRAND solar minimum is different.

A new study predicts that the next grand solar minimum could see the sun with almost a 7% reduction in light and heat – and this is 7% below the normal solar minimum. So pretty darned cold.

Historians believe that a grand solar minimum occurred between 1645 and 1715. That event was named the Maunder Minimum after the scientists who studied it at the time.

It got so cold that the Thames River in England froze solid. The Baltic Sea also froze and the Swedes were able to invade the Danes by marching across the frozen sea.

The Maunder minimum coincided with the coldest part of the “Little Ice Age” (c. 1500–1850) in the Northern Hemisphere, when the Thames River in England froze over during winter, Viking settlers abandoned Greenland, and Norwegian farmers demanded that the Danish king recompense them for lands occupied by advancing glaciers. The physical mechanism that explains how a drastic change in solar activity affects Earth’s climate is unknown, and a single episode, however suggestive, does not prove that lower sunspot numbers produce cooling. However, if real, the phenomenon may indicate that the Sun can influence the climate on Earth with even slight fluctuations. (source)

This wasn’t the first grand solar event in history. Another one is figured to have occurred from 1450-1540 called the Spörer minimum.

The Spörer Minimum is a hypothesized 90-year span of low solar activity, from about 1460 until 1550, which was identified and named by John A. Eddy in a landmark 1976 paper published in Science titled “The Maunder Minimum“.  It occurred before sunspots had been directly observed and was discovered instead by analysis of the proportion of carbon-14 in tree rings, which is strongly correlated with solar activity. It is named for the German astronomer Gustav Spörer. (source)

The “Little Ice Age” was linked to all sorts of events during the time period. Thousands of people in Europe particularly were wiped out. The time period was host to the Great Plague, terrible famines, wars, revolutions, witch hunts, and more.

Are we headed toward another mini-Ice Age?

Valentina Zharkova, a professor of mathematics at Northumbria University in the United Kingdom, believes we could potentially be headed toward another multiple-decade grand solar minimum as seen in the middle ages and has been warning people for years.

This quote is from an article published in 2015.

Zharkova…used a new model of the sun’s solar cycle, which is the periodic change in solar radiation, sunspots and other solar activity over a span of 11 years, to predict that “solar activity will fall by 60 percent during the 2030s to conditions last seen during the ‘mini ice age’ that began in 1645…”

…At the National Astronomy meeting in Llanduno, north Wales last week, Zharkova said that a series of solar phenomena will lead to a “Maunder Minimum,” which refers to the seven decades, from 1645 to 1715, when the sun’s surface ceased its heat-releasing magnetic storms and coincided with the Little Ice Age, a period of chillier temperatures, from around 1550 to 1850 in Europe, North America and Asia, according to NASA.

“The upcoming Maunder Minimum is expected to be shorter than the last one in 17th century (five solar cycles of 11 years),” Zharkova told Live Science in an email. “It will be lasting about three solar cycles.” (source)

Not everyone agrees with Zharkova’s conclusions and many believe that “global warming” or “climate change” will negate any effects of a grand solar minimum.

What would happen during another grand solar minimum?

While it seems very survivable, it has the potential for a damaging effect on our economy.

An important book on the matter was recently published in paperback. Nature’s Third Cycle: A Story of Sunspots by Arnab Rai Choudhuri…

…The question is whether we will enter another grand solar minimum just like the Maunder minimum which if history is a guide would mean a period of much colder weather winters and summers. More than a few experts with whom I speak regularly believe that we shall enter such a grand minimum along with the resulting bone-chilling weather.

If that happens, then there will be profound influences on the economy, including possible crop failures and rising energy use for home and workplace heating. Or in other words, expect bigger bills for food and energy. After a period in which the supply of both has been increasingly abundant then this change will likely come as a shock to many people and likely the broader global economy as well. (source)

The things preppers would need to focus on would be a food supply, alternative ways of growing, and ways to keep warm. An event lasting multiple decades would definitely outlast any supplies that most of us could squirrel away, so the key to survival would be adaptation to the new climate.

It is unlikely to send us the way of the dinosaurs, but should it begin to occur in earnest, you’d want to take your preps to an entirely different level.

Is it going to happen?

It’s impossible to accurately predict the actions of the sun. We have a good idea based on previous events, but things could always change. We’re definitely due to go into solar minimum – whether it will be grand solar minimum or not remains to be seen.

Is a grand solar minimum something for which you prepare? If so, can you share your ideas with us? 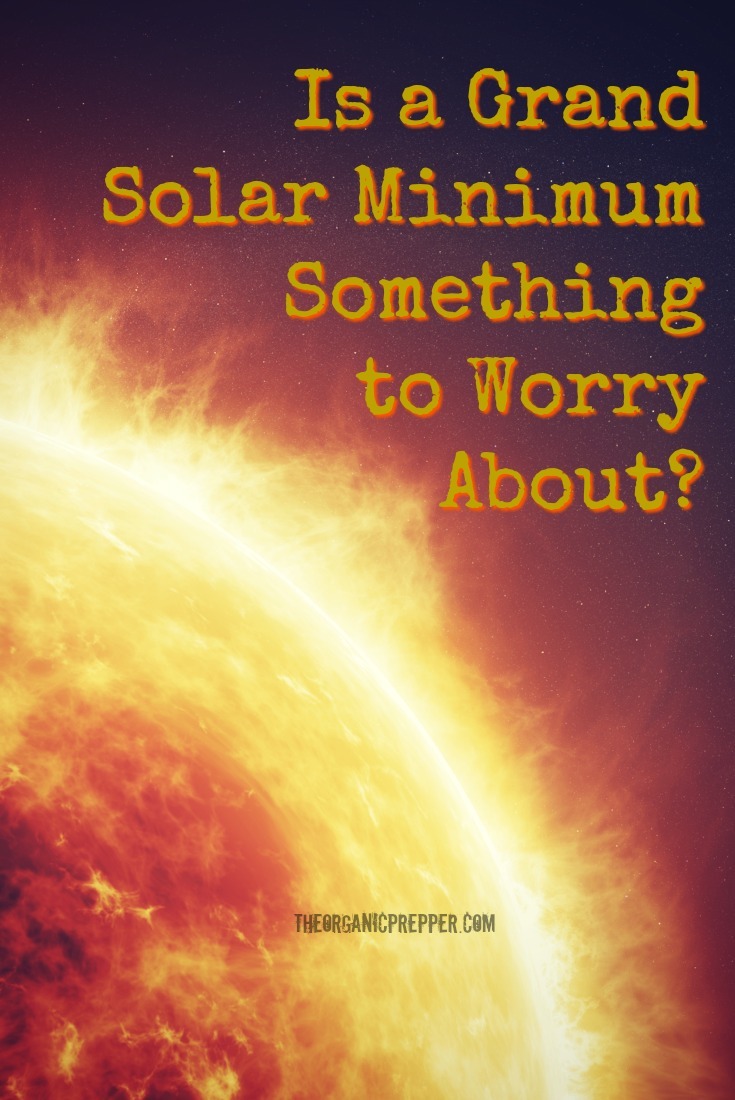