Anxiety, Anguish, Anger: How It Really Feels to Survive a Collapse 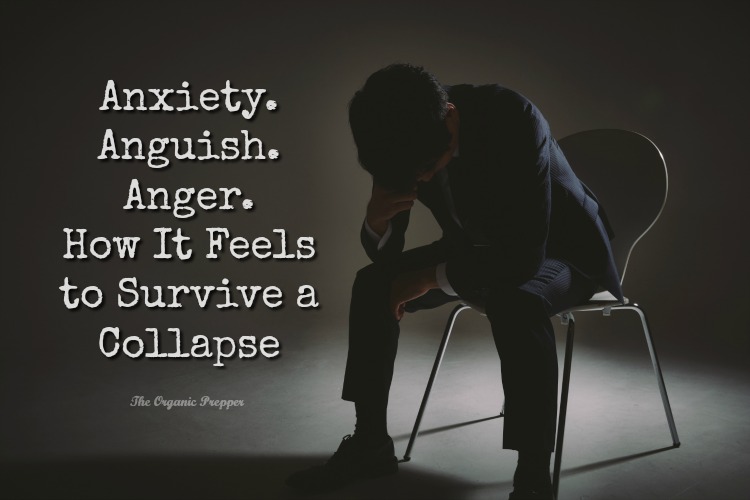 Hello to all those readers interested in learning from my personal experience of surviving an economic collapse.

I decided to write this article, the first of a series of several similar that will be posted because I am experiencing these days a huge emotional mix. I am not embarrassed in any way for this, I am a normal person, I have feelings and emotions like everyone else, and until not long ago I had a home, a job, and a conventional, peaceful life like perhaps many of you are enjoying right now.

May God keep it that way!

As a former oil worker, one learns to control emotions, because being in this business, a bad decision in the field if there is danger present, could cost one’s life. Or someone else’s. This said, when we made the decision (as a family we discuss all this of course) and, once my salary stopped being useful for three weeks worth of food, we decided that was the inflection point. After 14 years in one of the most profitable industries in the world (except in Venezuela), I was left with nothing in my bank account. The hyperinflation ate away all the little money that was there. The next step, fleeing to a foreign country (yes, I had savings in hard currency) and trying to find some stability was relatively easy, as my sister-in-law and mother-in-law were already here, and they had some space. So I started a small business (mainly private lectures) just to meet the ends, and it became more or less profitable. A phone call every two days to home, to speak with my family, and long, newspaper-like emails, social networks sometimes. (We decided to not disclose my departure because of OPSEC).

Everything had been happening more or less in a kind of natural way. I did not realize how deeply all this has affected me on a subconscious level. After the daily struggle ended, I suddenly start to become more and more anxious and sad whenever I received photos from my friends and family. I had never been a very delicate person regarding emotions, and feelings. I had been able to have everything under relative control.

But the uncertainty and stress have started to take their toll. What motivated me to write this, was that I did not even realize it. A grown man, dressed in black leather, riding a big, loud motorcycle, and whose eyes suddenly broke in tears trying to buy some medicines for a little, sweet, granny who sells flowers in a hutch to the side of the road for a living…come on. Yes, that happened to me. Powerlessness, inability to help because I had the money, but could not find the medicines in any pharmacy I went to…it was the first episode, and I should have taken it as the first warning about something was going on back there, behind the curtains. That was a year ago. I never had a similar experience until recently. I have been exposed to a degree of anxiety, just like a normal student and worker could experience. Once one learns to deal with it, everything seems to improve.

But you know what? We have experienced a disaster like few other countries are experiencing. An earthquake is a terrible experience. But it is fast and sudden. The agony of a slow-motion collapse like the one we are having, I am deeply convinced, leaves permanent scars in the minds of everyone who is going throughout. Whenever a natural disaster is present, perhaps we took our time, but we accepted it. It was inevitable, in most instances.

But when the situation is induced, and the only reason you can find is human evil…that changes things radically. The frustration level is very high. So high, that I have found myself walking (in hilly terrain) just to calm down a little bit. The other things that have worked to calm down my anxiety are meditation, a cup of warm milk with some drops of chamomile essence, and rest.

I never realized, until some recent events, the level of the threat we are facing. A total disruption to our former way of life. My sensitivity has been so high, that even being in the market and seeing the pet food large bags, makes a knot my throat, knowing that perhaps our furry parts of the family are not being well fed. And I start thinking about all the abandoned pets in the streets…you know how it is. I have a natural love for animals, and this affects me deeply.

After having read a little bit about the topic, I can say that the uncertainty levels are so high that it has been what has overwhelmed my self-defense mechanisms. Upon accepting this, I became aware that we were doing MUCH better than the average. I had a safety net and a parachute. A lot of people is now trying to sell their goods in an economy that is in the bottom of the tank, just to buy the bus tickets to get out of dodge!…Jeez, dude.

I have learned that the natural response of every individual is different, of course. Some face it with courage, some others just crash down, and crumble. The total impact depends on the magnitude of the threat; on how well prepared the person is to deal with it…here I had some advantages, as a family head. I had been prepping for more than 10 years now, and that helped me to overcome that incredible anxiety that has attacked me in the most unforeseen moments. With the good paying job we acquired some equipment, made some smart investments, and on time I developed some alternative income sources that allowed us to sort many obstacles. Good overall health, d a proper mindset has been extremely important for this.

One of our friends, a good fellow, in his 60s, who had enjoyed a relatively comfortable life, was not so lucky. He was the owner of several commercial locations that he had inherited from his family. The inflation rates and the food supply difficulties hurt him badly, financially speaking. He fell into a deep depressive state, and sadly he got sick and passed away some months ago. Heart disease, they told us. Had he put his guts together, asked for hard currency from his tenants, and start behaving like a prepper, maybe he would be still alive. He had properties enough to navigate through the mess by playing his cards wisely. That was a hard hit for us, and as well a close call: an improper approach in the worst of a crisis, can, and most definitely will, get people killed.

Added to the anxiety paroxysms, I have been experiencing something that could be defined as anguish. It is difficult to differentiate one from the other. This anguish is perhaps deeper and longer lasting. It comes around whenever I start thinking in the near future, instead. Not having any medical insurance now, like the full coverage we all had once, and the lack of a fixed employment with proper income is the main cause, maybe. I am sure it will mitigate once this is resolved. But it is there, and yes, the effect is noticeable.

Another emotion that I noticed is arising is anger. A gut-deep, strong, dark, powerful anger. Rage. Without any specific target. Not good. Anything that can force you to make a non-rational choice is a potential danger and must be assessed and controlled. I am working on that, though.

Something very interesting I recently read about is the perception the subject has about the crisis that generated the uncertainty state. Personality and some other factors like the age group of the individuals are important factors, too. We have to understand the need to overcome our own personal stuff, and take care of those who need us. It is extremely hard to do, but can be done for a while.

And of course, there is that support we receive when facing a crisis. It is hard to provide support when everyone´s life is a mess, too. I have received lots of support, and perhaps being lonely in a foreign place without friends, family and acquaintances is a major factor in this hard-to-overcome emotional state. And I am not exactly that kind of friendly neighbor, just a little below the average maybe (have had really abusive neighbors)…but I am a family man.

In the next article, I will write about the three crisis stages. I admit to having a denial stage until not so long ago. But the recent violent events made me wake up about just how far evil can go.

Dedication: I would like to finish dedicating this article to our friend Nelson “The happy mustache” as we called him, recently deceased, another innocent victim of this economic collapse. He was really a nice, funny guy, and had lots of good vibes to offer.

Fly high, my friend. And don´t get your mustache too wet up there in those clouds…