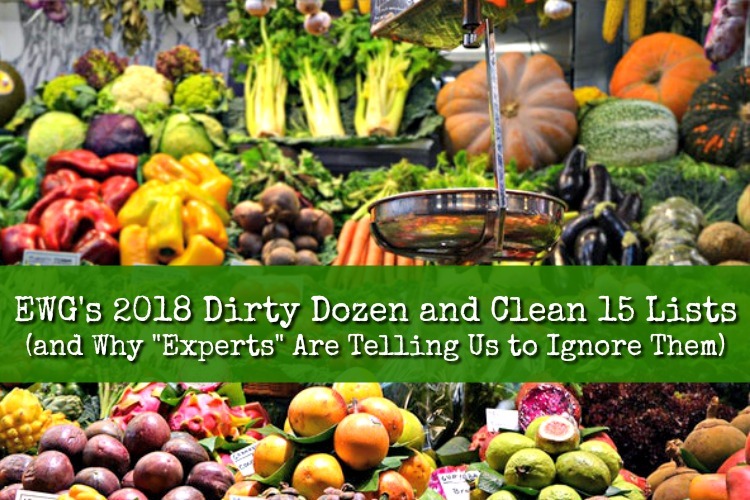 It’s that time of the year again! EWG has announced it’s annual “Dirty Dozen and Clean Fifteen” list of the foods that are the most contaminated with pesticides. Meanwhile, nutrition “experts” are telling consumers that the list isn’t important and that we should completely ignore the shopper’s guide.

“It is vitally important that everyone eats plenty of produce, but it is also wise to avoid dietary exposure to toxic pesticides, from conception through childhood,” said Sonya Lunder, senior analyst with EWG. “With EWG’s guide, consumers can fill their fridges and fruit bowls with plenty of healthy conventional and organic produce that isn’t contaminated with multiple pesticide residues.” (source)

Studies suggest that consuming pesticide-laden food can result in many different health issues.

After countless studies, pesticides have been linked to cancer, Alzheimer’s Disease, ADHD, and even birth defects. Pesticides also have the potential to harm the nervous system, the reproductive system, and the endocrine system. Pesticides can even be very harmful to fetuses because the chemicals can pass from the mother during pregnancy or if a woman nurses her child. Although one piece of fruit with pesticides won’t kill you, if they build up in your body, they can be potentially detrimental to your health and should be avoided as much as possible. (source)

Since most of us can’t afford a diet of organic, locally-grown pesticide-free food, the Environmental Working Group came up with an annual list that can help you decide what to buy conventional and what to buy organic. Here were some of their most important findings this year:

Read on for the EWG’s lists.

The Dirty Dozen: These are the most contaminated foods

When you go shopping, you should look for the organic version of these foods. The conventional varieties have the highest levels of pesticides that you’ll find.

The Clean 15: These are the less contaminated foods

The Clean 15 list suggests the produce that is least likely to contain pesticide residue. However, if you’re avoiding GMOs, it’s important to note that this list does not take genetic modification into account – this is only about pesticides.

But many “experts” are saying we should ignore the Dirty Dozen list.

Sadly, many people touted as nutrition experts say that the lists aren’t relevant.

Here’s what some of them had to say.

These “shoppers’ guides” are a disservice to consumers and confusing because they are not based upon sound science and are often in direct conflict…Among the key findings, misleading messaging which inaccurately describes certain fruits and vegetables as having “higher” pesticide residues results in low-income shoppers reporting that they would be less likely to purchase any fruits and vegetables – organic or conventional. There is a plethora of research which shows eating any form of fruit and vegetables provides more health benefits than skipping them altogether. (source)

Carl K. Winter, PhD, food toxicologist and vice chair of food science and technology at the University of California Davis:

[Winter] says the amounts of pesticides found on produce are ”tiny”…Based on the report, he says, “I worry that people are becoming concerned when they should not be.” (source)

The Alliance for Food and Farming (AFF) says that the EWG’s conclusions are “unsupportable”:

Teresa Thorne, executive director of the Alliance for Food and Farming, an industry group representing farmers who grow both organic and conventional fruits and vegetables:

[Thorne] says ”the report is not science-based.” She points out that much of the research finding benefits to a diet rich in fruits and vegetables has been done on conventionally grown produce, not organic. (source)

I think the potential bias with the “Alliance for Food and Farmers” is obvious.

So what’s a shopper to do?

First of all, we each have to try and provide the best nutrition possible for our families while remaining within our budgets. (I wrote a popular article on making these decisions that you can find right here.) However, I sincerely believe that avoiding pesticides as much as possible is extremely important. I use the Dirty Dozen and Clean 15 guide for my own family when making choices about what to purchase at the grocery store.

Pesticides are, by their very nature, poison. Why on earth would I deliberately feed them to my children? Pesticides aren’t the only concern out there in Groceryland, so I recommend avoiding them whenever possible.