As the EU Refuses More Migrants, Thousands TRAPPED in the Balkans Are Overwhelming the System 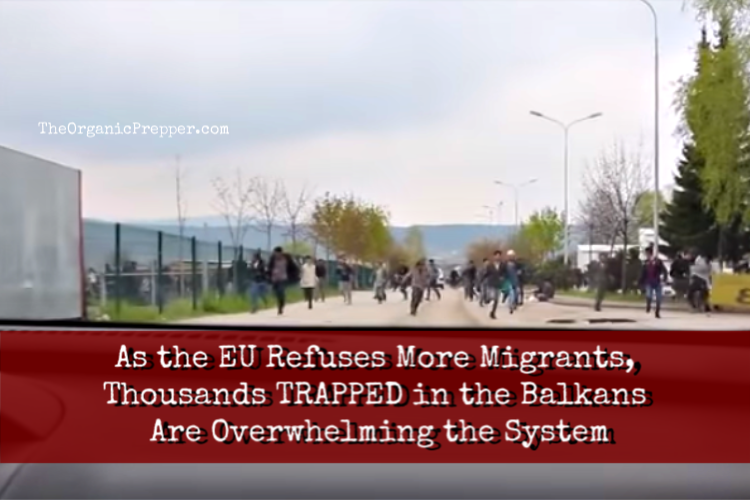 Editor’s Note: There are numerous reports that an influx of migrants is overwhelming the already-fragile system in the Balkans. You may think this is not pertinent if you don’t live in Europe. But just like the collapse of Venezuela, the Balkan War, and the collapse of Greece, there are patterns of behavior to which attention should be paid.

Here’s a quick video with a glimpse at the situation occurring right now in Bihac, a city of about 61,000 people in the northwestern corner of Bosnia.

Some have gone so far as to call it a humanitarian crisis, and others have said the number of migrants is increasing rapidly. Although the official number is around 4000 migrants, it’s estimated that the real number may be as many as 30-50,000. When I asked Selco if they outnumbered Bosnians, he replied, “Not yet. But in some parts, there are more capable immigrants then capable locals.” This crisis has caused havoc across the region, yet many locals are unaware of the depth of the issue. (Boy, does that sound familiar. Cognitive dissonance, it seems, is not an American problem.) I asked Selco to share with us what he has witnessed. Here’s what he has to say. ~ Daisy

Of course, there’s the money behind the immigration crisis in the Balkans

The interesting thing ( fascinating thing actually) is that the common citizen here in the Balkans finds out more about the immigrant problem here in our region when reading the world news than the local news. You may not know unless you are out in the field every night, seeing all that.

There are several reasons for that, and the most important one is the fact that local governments are taking money from the EU do “deal” with immigrants HERE. In other words, the EU does not want immigrants, so they are giving local governments outside the EU money to deal with the situation and to keep those folks here.

Of course, the money ends up in the pockets of a few powerful people at the top of the pyramid, definitely not in the system that should take care of immigrants.

So there is not too much news in local media about problems with the immigrants. The ruling structures do not want too much info about how heated the situation is.

Everybody has an opinion, but there are two major opinions. One says “we should help people in need” and the other that basically says “f..k them, they need to go where they came from.”

I have my own opinion about it, but here is the truth: nobody cares about my opinion.

Just like nobody cares about your own opinion on this subject.

I strongly believe that events are set in motion, events that are way above our influence, driven by some powerful forces, and that the opinions of common people are irrelevant unless they discuss how to prepare for it and what to do.

Who are these immigrants?

So, who are they?

Several times, I helped people among them, sometimes with food, sometimes with other things… as times go by, and as I emerge myself into discovering more, my wish to help fades away. It does not disappear, but it fades.

The majority of them are young folks, men in their 20s, in pretty good shape, with experience in violence, knowledge about weapons, and experience (quite a number of them) in different armed groups and conflicts from wherever they came from. There is a pretty high percentage of drug abuse among them. When they have absolutely and completely different views on how man (and woman) should live, how society around them should look… you get the idea that we all may end up deep in troubles.

And what about the system?

The system was barely functional even before these waves of immigrants, so you can only imagine what tens of thousands are doing to it.

Here is an interesting fact: Most of the crime that immigrants commit is actually violence between themselves, and it is usually violence that is made with knives.

The reason is probably that there are many different people among them, actually many different groups and nationalities, so they are simply fighting between themselves over what group is going to be in charge.

Guess where they are gonna turn to look when they finish that?

And yes, among them there are people and families with kids who just run away hoping for a better life, who willing to adapt differently, to “blend” in, to integrate and assimilate in a new and better society. They want to live a normal life.

I am sad to say that I think they are the minority.

The majority of them want to change MY world to their vision, not adapt their vision to ours.

The capability of the migrants

You have men who are traveling for months without proper food or resources, men with fighting experience, men with survival experience… you can get a clue as to how capable they are.

They are capable, no matter what we may say because they look poor and dirty. Trust me, they are real survivalists capable of a lot of stuff. (I wrote more about the kind of stuff people can be capable of when they’re desperate in my book.)

The problem is if that capability one day may be turned against me or you. How capable you are?

Those folks sleep here in abandoned houses or simply camping in city parks. You are probably saying “Why does nobody arrest them?” Well, if you have 10,000 of them in an area that has 800 police officers, it is clearly a matter of waiting for what is going to be.

What about the future?

The problem here is very simple. We are neighbors to the EU- where those folks want to get in. Of course, the EU has closed its borders, so those people are simply amassing here in this region that is already very politically fragile. So the future will be probably very interesting: nobody can send them back because there are too many of them, and no country wants them.

A general feeling among locals is still kinda confusing. As you know we have been through a terrible civil war so people here still have fresh memories about wars, refugees, and suffering. I think because of that most of us are pretty friendly if not neutral about them.

But here is the thing and it may be politically incorrect but it is the truth, so bear with it: they are DIFFERENT.

And I do not think here about the color of their skin, or their religion or their nationality. I think about their views on how the world should look.

That is gonna start real problems.

And the EU (Europe)

People here have a saying that “Europe (EU) is an old lying wh*re” and lot people find this whole thing is actually backfiring on Europe because of many reasons.

We are witnessing events that are changing history and the world.

Editor’s Note: More details about where the migrants are stying

Many migrants are staying in shelters or local parks if the shelters are filled.

Others are renting rooms from local residents. Currently, the police are searching private homes because locals are illegally renting rooms to migrants.

The Bihac police continued its search of private houses owned by the owners, the search action and the transfer of migrants from the city to the Vucjak area. In today’s search, several facilities have found close to a hundred migrants and refugees. Migrants stayed in private homes where the accommodation paid 10 euros per day per person, and criminal charges would be brought against the owner for illegal renting. The action, according to the Bihac police, started yesterday, and will continue in the coming days, and appealed to citizens to stop this practice. (source)