Eating What We Grow: What We Learn and What We Love 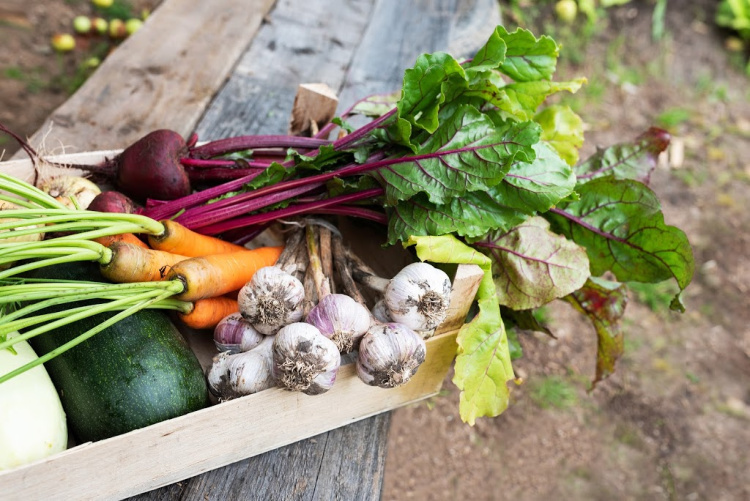 I grew up in Alaska. My family bought most of what we ate at the store, shipped in from the “Lower 48,” as the rest of the U.S. is known up north. The supply chains were long and fragile, and the produce was both expensive and terrible. Wilted lettuce, fuzzy strawberries, bruised apples. I couldn’t imagine why anyone would eat a peach or an ear of corn on the cob because after weeks in transit these delicacies taste like cardboard (or like rot). I ate ice cream, frozen hash browns and plenty of McDonald’s. Alaska is America, after all.

There was also another cuisine in my household, one born out of connection to the land. My family picked tart wild blueberries on the steep mountainside, with the tundra a spongy vermillion carpet around us and the first snows dusting the bare peaks above. We spent hours on icy glacial rivers or motoring past a pebbly shore, casting after salmon and halibut. We scoured the woods for wild mushrooms: nutty white King bolete (porcini), sweet-sour butter bolete, blue-bruising birch bolete, shaggy manes, and oyster mushrooms.

My eyes were opened when I was able to access other foods.

I got so sick of salmon that I refused to eat it, but the joke was on me because the salmon was already in my soul, residing there as a deep curiosity about unusual foods. As I attained adulthood and went traveling I sampled a long list of strange stuff: raw whitefish roe and muktuk (raw whale skin with the fat still on) in rural Alaska, alpaca and guinea pig in Peru, kangaroo and saltwater crocodile in Australia. I nibbled whatever was available: feijoa and loquat and dragon fruit, carpenter ant and raw jellyfish and bladderwrack seaweed, oysters smashed open on the beach.

This isn’t as strange as it sounds. Dr. Weston A. Price, the author of the classic book Nutrition and Physical Degeneration, was a dentist who traveled the world in the 1930s to document what people ate. His research includes 500 pages of pictures of people’s mouths and long lists of who did and who did not have cavities. At the edges of the Earth, Dr. Price found healthy people thriving on almost every imaginable diet: dried fish with a little oatmeal and cabbage in Scotland, cattle milk and blood plus wild vegetables in Africa, seal or caribou and berries in Alaska, cheese and rye bread with a little cabbage in alpine Scandinavia. Their teeth were flawless, their faces beautiful.

Not everyone was healthy, though. Some places Price visited, most people had had every tooth pulled from their heads by the age of 20. Some populations also had underdeveloped chests, high incidence of tuberculosis, crowded mouths and facial deformities, all from lack of nutrients. These folks were not eating a wide variety of different diets. They were all eating the same diet, which mostly consisted of white flour and jam.

There isn’t one perfect diet, because humans are omnivores that can thrive and be healthy on lots of different sets of foods. Just not on white flour and jam.

Now we’re eating wild and foraged things, plus what we grow.

These days, I live on a little homestead in rural North Carolina. My family has 17 acres of mixed woods and overgrown fields, with a pond and a stream. We have a little house we built with our hands, a garden, a young 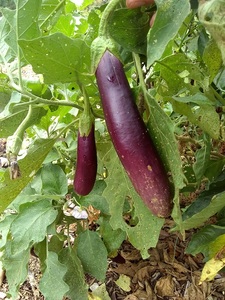 We still eat wild things, mostly violets and sheep sorrel, chickweed, wild spring onion, a few puffballs and blackberries, bass out of the pond. One year we found a bumper crop of shaggy-bark boletes that taste like the butter boletes I grew up with. One year I killed and cooked an egg-stealing rat snake (it made fine tacos).

But my county is farm country, a thoroughly humanized landscape since before Columbus when the natives burned the undergrowth to create a fantastically productive landscape that white settlers thought was a park. If we want to eat from the land rather than the Walmart (and we do), most of that food has to be encouraged to grow, not just hunted and gathered.

Growing food is a fascinating and complex endeavor fraught with failure and surprise. My favorite potatoes and English peas are tougher to produce here in the baking south than in the frozen north. Instead, I’m gradually learning to grow exotic things even the luckiest Alaskan gardener can only dream of, like eggplant, grinding corn, hot peppers, and sweet potatoes.

Some growing seasons are successes and others are lessons.

This year was an education in drought. In June we had a 100-year flood that took out the bridges on two of the four roads into our property. Nine months later, those bridges still aren’t fixed. After that deluge, it hardly rained for three 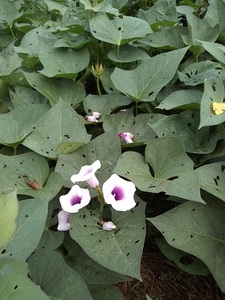 months. Seminole pumpkin, for several years running a heavy producer, utterly failed because of squash bug combined with too little water. My tomatoes made only enough for the table and about 15 jars of salsa. I have a brand new solar dehydrator, and I was looking forward to dried tomatoes with everything. Instead, I have more frozen green beans than I know what to do with.

Corn, actual corn growing in the field rather than moldering on the produce shelf, is a revelation! I have a hand-crank grinder that makes dried corn into something that is 50% coarser version grit and 50% a flour almost as fine as masa. This year we planted a variety called Blue Clarage, which grows to 11 feet and cooks up purple! It looks like a dessert rather than dinner, and it tastes like popcorn. I cook it in milk or bone broth and put some sautéed eggplant or tomatoes and cheese over it.

We’re still buying that cheese at the store because goats have proven challenging. Dump a few goats on a deserted island and in a decade they’ll have overrun it, but around here our soils are too low in selenium for them to thrive. If I don’t supplement my little herd carefully, does are too weak to expel a placenta after birthing. Kids are born dead or weak. They also need copper supplements, tetanus vaccinations, and disturbingly frequent antibiotic rescues. I’m sticking with them, though. I can’t learn anything if I give up.

I haven’t given up on four-season gardening, and this year I had much better success than in the past. By choosing frost-tolerant varieties and deploying some very low-tech season extension tools like cold frames and row cover, I can harvest fresh food year-round. The trouble is, fall crops need to be sown in August and September in my area. You know, the hottest, busiest, most exhausting peak of the summer, when all I want to do is go lay in the lake. This year I nursed some beets, mustard spinach, chard, carrots, radishes, cilantro and arugula through the heat. I’m still cutting arugula under the row cover at the end of February.

One recent pleasant surprise involves cowpeas. I have not succeeded in growing dry beans, which is a shame 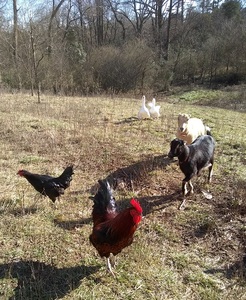 because we like to eat them. Our sheet-mulched garden is still young, and while the nutrients settle out and the soil turns over, the Mexican bean beetle has been an issue. I learned by accident that my beloved yardlong bean, highly productive and resistant to bean beetle, is actually a cowpea. The solar dehydrator gets the hulls dry enough to pulverize, and the dry beans themselves are like a tastier, faster-cooking black bean.

Of course, some experiments just don’t work out. Every year there is too much okra, and every year I am compelled to do something just atrocious with it, at least once. Okra lasagna comes to mind. We still haven’t found enough favorite sweet potato or pumpkin recipes. I plan to work harder on swapping out store-bought rice and flour for these more nutritious carbohydrates we can easily grow, but sometimes a kid just wants a pizza.

Chickens have been a successful addition to our food production system, both for the protein and vitamins they add to our diet and for the services they provide. We appreciate the pest and weed control, the high-quality manure and the entertaining antics. Spare roosters are culled at six months for stir-fries and sautés, while older hens go into the crockpot as chicken gumbo or arroz con pollo. All bones are simmered low and slow for broth, which replaces meat in many of our favorite dishes. Then the stripped bones are burned in the woodstove and added with the ash to the garden.

Our relationship with food is emotional, not just digestive.

Learning to cook and enjoy what thrives on our little homestead is a constant challenge. Our relationship with food is an emotional one, not just a digestive one, and sometimes I long for the cheek-cramping wild blueberry preserves or grilled salmon hearts of my youth.

I wonder if my children will grow up, leave home and crave nutty, home-ground corn or fried okra. I hope they take their gardening skills with them, wherever they go.

Kara Stiff grew up in Anchorage, Alaska and got her BS in Sustainable Agriculture from the University of Maine. Now she lives with her husband, two small children and some number of goats on 17 acres in rural North Carolina. She documents her family’s journey toward resilience, community engagement and a lower environmental impact at low-carbonlife.org. 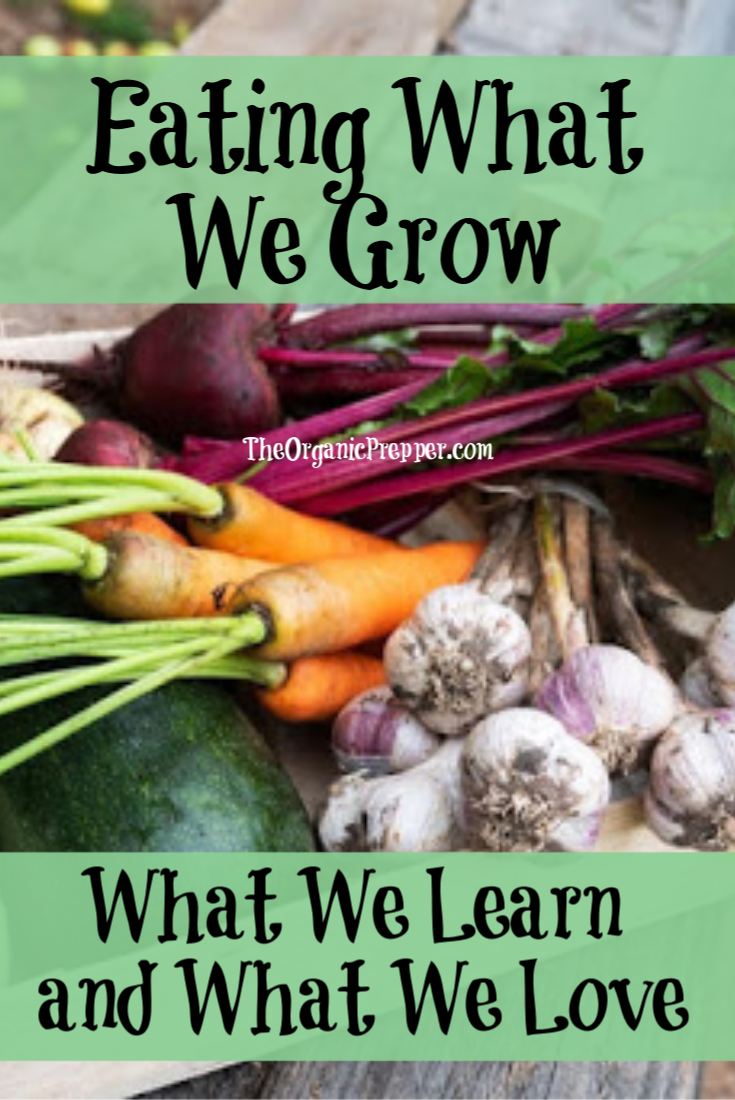