Off-Grid Cooking Lessons: How to Prepare Food Without Using Electricity 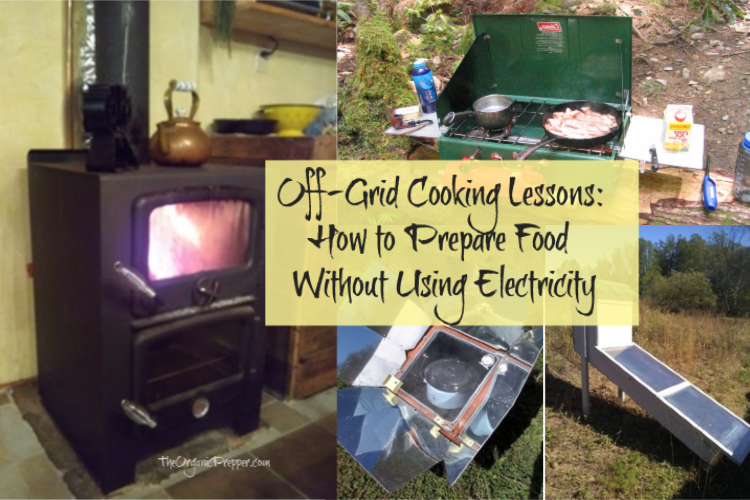 When we started building our little house on 17 acres in the foothills of North Carolina, we planned to eventually go off-grid. My husband and I had a one-year-old and a three-year-old. We paid contractors to do the excavation, pour the footer and lay the block, and then we did all the rest of the work ourselves with help from friends and family and “help” from our kids.

It was a once-in-a-lifetime project, exhausting, exhilarating, mud-covered, sweat-soaked, crazy. I’m so glad we did it. I would never do it again. Actually we are building a second structure now but with bigger kids, not toddlers, and much more slowly.

The easiest way to go off-grid is to need as little electricity as possible.

Generating our own electricity would be expensive, so in order to be able to afford it, we had to strive to need as little electricity as possible. We’d already gotten rid of our dryer, corralled our energy vampires, switched out inefficient bulbs and designed the new house to be tight. These changes are good for about a 43% reduction in electricity usage in an average American house or about 13 kWh (kilowatt-hours) per day.

This left us using about 17 kWh per day. Still too expensive! To reduce the heating and cooling usage our little house has no forced air, no furnace or boiler. We heat with a wood stove and ventilate by opening the windows. The house is sunk into the hill, which reduces our cooling needs significantly. We utilize ceiling fans, allow our bodies to adjust to summer temperatures (making gardening in the heat merely unpleasant rather than lethal), and run a tiny window air conditioner in the most humid months.

We got rid of our refrigerator but kept our small chest freezer. We swap a bottle of ice from the freezer to an insulated cold drawer to keep the milk fresh. We shower out in the garden when it’s warm enough with solar-heated water. There isn’t too much left, after tackling all those electricity drains (for a more complete discussion of our electricity reduction adventure, see here). We wanted to retain the ability to vacuum, watch a movie and hang a strand of Christmas lights.

Much of the remaining usage is cooking, so we got set up to cook mostly off-grid.

I say mostly because we still have a crockpot, a toaster oven, and an electric kettle to help us integrate our schedule with that of the outside world. The wage-earner can have his tea when he leaves before the morning fire. The family can have a hot dinner after a day away, or simmer broth overnight. These are convenience devices; we don’t rely on them for our main cooking needs. 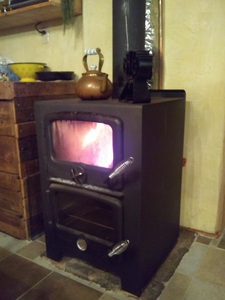 For winter cooking we use our wood stove, a Vermont Bun Baker. It has an oven and a cooktop. Ours is also set up to make hot water in an open-vented thermosiphon loop. That heat is transferred to the pressurized plumbing through a setup that works surprisingly well, though it was prohibitively expensive. I was nervous about planning a house with a wood cookstove because while I’d cooked on a few, I hadn’t lived with one long-term. But there wasn’t room in our 725-square-foot house for two stoves nor was there room in our tight budget. It was one or the other.

In reality, I adjusted to cooking on a wood stove fairly quickly and easily. The oven only gets good and hot when the stove runs for a while, so I only bake in the coldest months, which is fine because I’m not really into baking. Shorter fires are enough to roast peanuts for homemade peanut butter, or eggshells to crush for the chickens.

Surprisingly, I burn dinner less often on the woodstove than I did on electric or gas stoves, probably because it just takes as long as it takes. There’s no way to impatiently turn the heat way up like on an electric, only to regret it when the food blackens. It doesn’t really take longer to make dinner, though, because I use the heating-up time well. I also burn myself on it less often, probably because the woodstove is hot not just on the top but down the front as well, so it’s impossible to forget that it’s hot. The children have great respect for it and have not come close to even a minor burn.

If you care about environmental damage as we do, a wood stove is not the most environmentally-friendly choice. I did some math and discovered that the one and a half cords of home-grown and salvage wood we burn per year is definitely environmentally worse than using electricity to accomplish the same tasks, but not by that much (see a more in-depth discussion here). Though my family carefully considers environmental concerns in every decision we make, we also care a lot about resilience. In the end, resilience won out for the critical tasks of winter heat and cooking. 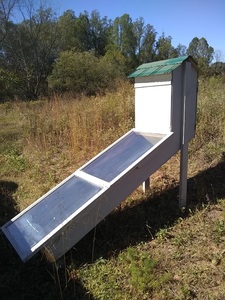 Summer off-grid cooking is a less straightforward prospect. From mid-March until Halloween it’s far too hot to cook inside, and that’s when all the food preservation must be done. This past summer we got together with two other homeschooling/homesteading families to build solar dehydrators using these free plans from Appalachia State. They call for $300 worth of materials, but by pooling our skills and the materials we all had lying around, we only spent about $200 to build three dehydrators.

I was most excited to use the dehydrator for tomatoes. I canned about 18 quarts of diced tomatoes last year and another 20 pints of salsa, which takes up a lot of space in a small kitchen, and a lot of my time. Unfortunately this year we had drought conditions. The tomatoes only made enough to eat fresh, plus about 15 pints of salsa and just two quarts dried. The dehydrator worked great for those two quarts, though, and it also did some yummy dried pears, peaches, apples, and blueberries.

That’s not all we need dried, though. It is so humid here that in the summer that it’s very difficult to get anything dry enough to go in a jar. Sun-dried chamomile and hops will mold! So we used the dehydrator for our dent corn, tea, hops, and lima beans. I also discovered that my favorite green bean, a yard-long variety, makes a perfectly edible dry bean if the hulls get dry enough to crush, which the dehydrator accomplishes very well. Overall, I’m really pleased with its performance. 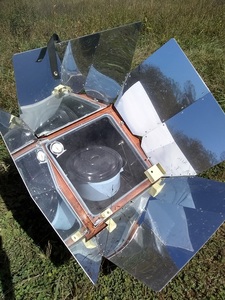 Another essential piece of summer cooking equipment is our All-American Sun Oven. The internet is full of cheap DIY solar oven plans. I looked at all of them but I was exhausted from building a house, and I just wanted a sturdy appliance that would definitely work. The All-American certainly is that, so I don’t regret the price tag for a moment. I use it as a slow-cooker, especially for big batches of beans. I’ve done some baking, too. Zucchini bread comes out great. My muffins always turn out yummy but dense. That’s probably not the sun oven’s fault.

A solar oven and a solar dehydrator don’t entirely cover our summer cooking needs, so I also use a camp stove for frying and simmering. It’s a ten-year-old Coleman that I relied on exclusively before I met my husband when I lived for a while in the back of my truck. In seven months of summer cooking, it burns about four gallons of gasoline, which is cost-effective and highly convenient during the busy gardening season. Of course, it’s not rated for indoor use, which is fine because the cooking heat needs to stay out of the house during those months anyway. It sits in the summer kitchen under the grape arbor.

This summer, I’m looking forward to finally getting set up to cook with wood outdoors. I’m going to trial a cinderblock rocket stove to replace the Coleman, which is getting quite elderly and will eventually fail. We have an endless supply of twigs and sticks near the house. There may also be some sort of wood-fired pizza/bread oven in our future. Now that would get me excited about baking.

This has greatly reduced our need for electricity.

All together these changes have brought our electricity usage down to an average of 4.7 kWh/day, which is about 15% of the US household average. This is low enough to be able to afford a small off-grid system, although I’m no longer sure we’re going to get one soon.

The ways my family meets our needs are continuing to evolve away from electricity, gasoline and other purchased inputs, and toward things we can accomplish on our own, in partnership with our land.

The journey is fascinating.

Kara Stiff grew up in Anchorage, Alaska and got her BS in Sustainable Agriculture from the University of Maine. Now she lives with her husband, two small children and some number of goats on 17 acres in rural North Carolina. She documents her family’s journey toward resilience, community engagement and a lower environmental impact at low-carbonlife.org.