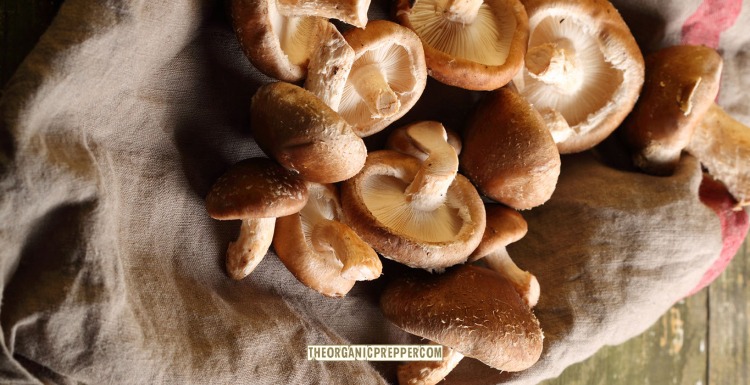 My mushroom cultivation experiments with shiitake and lion’s mane are proceeding apace, so I thought I’d write to update interested parties. In this article I’ll discussed what’s worked so far, what hasn’t worked, and how I plan to progress.

Right now I’m growing shiitake and lion’s mane mushrooms. For one thing, as those of you who read my last article know, I’m not a big fan of lion’s mane. I don’t really like the taste, although I have been enjoying the lion’s mane tincture in my morning chai.

The first flush of shiitake has been dried and will make a lovely Christmas gift to a friend who will properly love them. Many mushrooms have a long list of health benefits. They’re antioxidants and contain a number of micronutrients, including selenium, potassium, riboflavin, niacin, vitamin D, proteins, and fiber. They’re cholesterol-free. According to this article from the National Institute of Health, they also possess these properties:

“Many nutraceutical properties are described in mushrooms, such as prevention or treatment of Parkinson, Alzheimer, hypertension, and high risk of stroke. They are also utilized to reduce the likelihood of cancer invasion and metastasis due to anti-tumoral attributes. Mushrooms act as antibacterial, immune system enhancer and cholesterol lowering agents; additionally, they are important sources of bio-active compounds.”

So why not have some fun this winter and experiment with mushroom cultivation?

The other reason for restricting my experiments to two varieties is simplicity. By keeping things on a simple and basic level, I maximize my chances for a successful learning experience. I chose lion’s mane for its many health benefits, most notably in the management of anxiety. This is generally held as a more challenging organism to cultivate, so I added shiitake. Shiitake is a very popular culinary mushroom with its own set of benefits, and generally held as much easier mushroom to grow.

So far, I’ve found both of these generalizations to be true. Lion’s mane has been more of a challenge and shiitake less so. However, as far as taste goes, lion’s mane has been superior. Yes, I’ve given them a fair chance! Also, shiitakes have an unfortunate side effect: shiitake dermatitis. It’s not deadly but I can’t say it would be pleasant either. Thankfully though, shiitake dermatitis is generally a side effect of consuming medicinal amounts of shiitake – not dietary amounts.

As I’ve indicated in my previous article, I’ve started my learning journey with table top farms, available from Field and Forest products.

Want more in-depth information about mushroom growing? Check out our course, How to Grow Culinary and Medicinal Mushrooms, on sale NOW!

I guarantee some level of success for my efforts, but why do I want to buy these things in perpetuity? Why even continue to buy culture or spawn when I can make my own? It’s this DIY mushroom cultivation that I’ve been testing of late.

So far, I’ve tried cultivating both organisms in wet straw with wheat bran added. My research has indicated that shiitake loves straw, while lion’s mane is a 50-50 proposition: some say it’ll grow in straw, others say it won’t.

The shiitakes have almost fully colonized my gallon freezer bag within just two weeks. The lion’s mane hasn’t, and I tried my first inoculation back on November 1.

To be fair, my first try at inoculation didn’t go well due to the block pieces drying out in a pot. I tried putting them in wet straw and a bag that would help them retain moisture, and it doesn’t seem to have worked. So it’s good that I hedged my bets and purchased two more farms, so that I have fresh mycelia to try again. A Plan B is good.

What about rye berry grain inoculation?

The other thing I’ve done, based on more research, is prepare rye berry grain for inoculation with both varieties. Here’s what I did:

First, I soaked the grain for 12-24 hours. Once that was done, I cooked it for 10-15 minutes, packed it into clean jars, closed with the prepared lids, and sterilized the entire thing for 90 minutes at 15 PSI. I’m planning on inoculating two jars of each variety. Hopefully the other four jars will keep a bit, since they’re sealed and sterilized.

I used my pressure canner to sterilize the grain and made my own mycology lids, using cotton to plug the hole I drilled in them. Fungi in general are obligate aerobes, meaning they need oxygen to live. By putting a filter into the hole, oxygen is allowed into the jar while avoiding contamination.

So, I drilled a 1/4” hole into a standard metal Ball canning lid, stuffed some cotton into the hole, filled my jars with the prepared grain, and sterilized according to the above instructions. I plan to inoculate my jars with mycelium from either the table top farm (lion’s mane) or the colonized straw (shiitake.)

Hey, doesn’t everyone spend their weekend doing this kind of thing?

(Make sure to check out our free QUICKSTART Guide on what to eat when the power goes out. Mushrooms could play a role here!)

A couple of noteworthy items to consider…

I only got one flush of shiitake from that farm. I’m not sure if that’s because the farm dried out under the humidity tent, or that’s just all she wrote for the method. According to Field & Forest Products, they only guarantee the first fruiting. I did, however, get quite a large batch of shiitake for my efforts. It’s also my understanding that many people do dry out the block, allowing it to rest for a second fruiting. I’ll have to try that!

There’s also a technique called cold shocking, which is lowering the temperature for 12-24 hours to induce pinning. The technique is given here, and involves tossing the block into the fridge. Another thing I’ll have to try! Cold shouldn’t be a problem in an upper Midwest winter.

The lion’s mane farm has a huge fruiting ripening as I type.

There’s only one fruiting site present even though I removed the block from the box entirely and cut holes on the sides – exactly as I did with the first farm. The company describes the block as producing 1.75 lbs over several months. That’s a great way to add on to your 3-layer food storage plan.

I didn’t leave the last block that long as I wanted to inoculate my yard and time was short. In addition to taking mycelia from that block to inoculate the grain, I’m going to try leaving the block longer to see what happens. I’m also going to try inoculating some into the wet straw/wheat bran mixture again, using the bag method so the fungus doesn’t dry out this time.

The old blocks are going into the compost bin, along with the failed straw inoculation. This can actually result in more mushrooms, so why not try? The compost bin should be warm enough to keep the fungi alive as well, and mushroom fungi do survive Midwest winters. It’s said that before Edison invented the light bulb, he learned 10,000 ways that it didn’t work! And so I try.

Learning happens either way, and I may have more mushrooms than I know what to do with!

Another method used to inoculate grain for spawn making is to use mycelia grown in PDA agar or a liquid culture. In this case, we drill two holes in our lids and close one with sealant, creating a self-sealing inoculation port.

Remember, we want to avoid contamination of our cultures at all costs! Molds can grow, which not only compete with our desired organism but in some cases, can poison the results. Therefore, aseptic techniques apply. A bit of alcohol used to sterilize hands, working surfaces, and instruments can save many problems down the line!

(Here’s an easy way to make and inoculate grain spawn.)

Liquid cultures can be obtained from a number of sources, including Amazon and Ebay. If you’re interested in this, I would obtain liquid culture from reputable sources that specialize in mushroom growing, then learn how to cultivate them yourself. It isn’t rocket science, folks! Since I haven’t yet gone this route I can’t really recommend any particular merchant, unfortunately.

That’s the current state of my mushroom growing efforts.

To summarize: I’ve harvested shiitakes, have lion’s mane moving steadily towards a great harvest, inoculated straw with one failure and one success, and prepared grain for spawn making.

My plans moving forward are to inoculate that grain and when the straw bag is ready, fruit the shiitakes. I’ll definitely be a proud mama, if successful!

I’m also going to make and inoculate my own sawdust block from oak pellets, hopefully another proud mama moment in the making. Have you tried growing your own mushrooms? Let us know what kind and your methods & results in the comments below!

Did you enjoy this article? You’ll love our course on growing mushrooms at home! 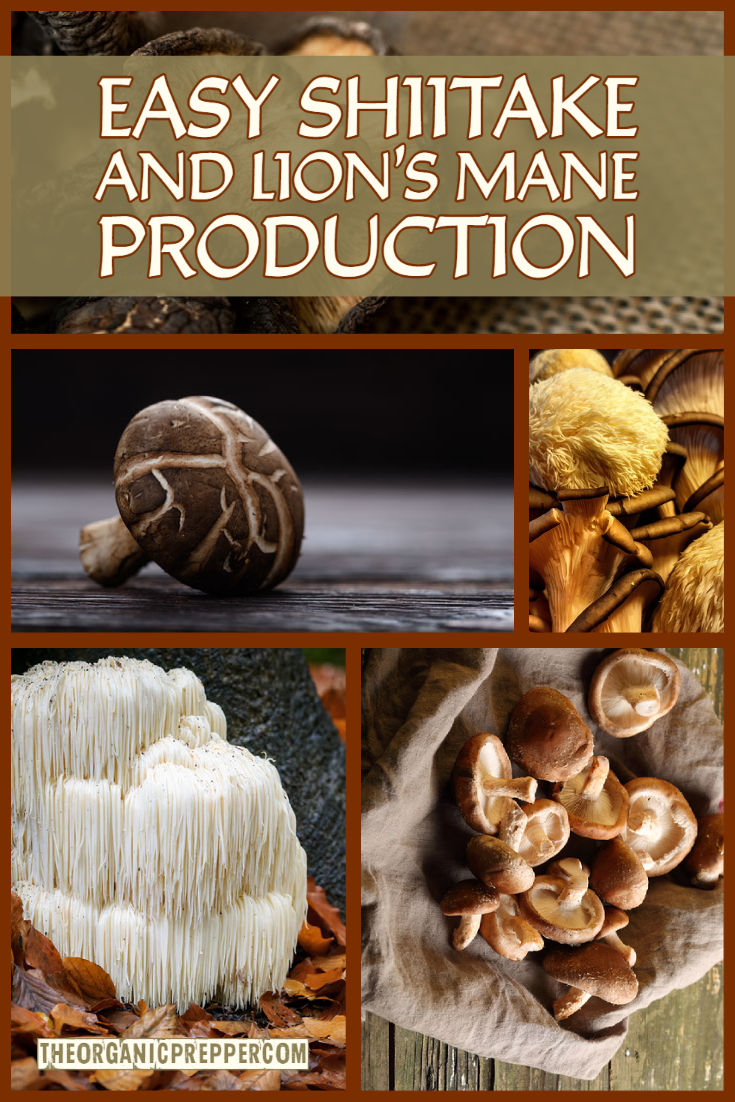