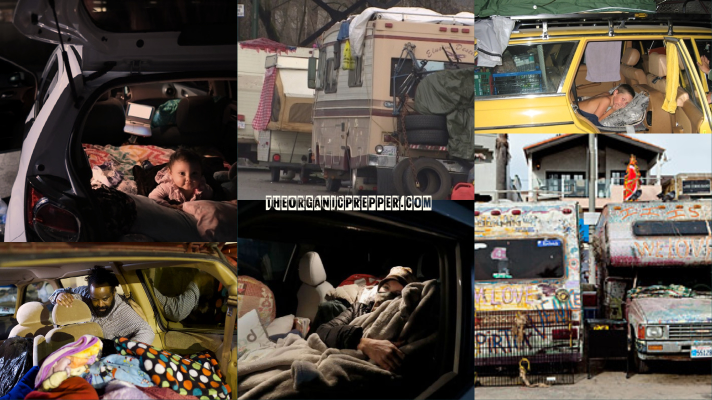 A recent story floating around mainstream media regarding “modern-day nomads” reads like a contemporary article on Henry David Thoreau. It shares stories of people looking to downsize their life and live simply and stories of people who have fallen on hard times, unable to afford rent.

However, what is lacking is the exposure of the dark underbelly of the “modern-day nomad” culture. In other words, they neglect to mention the fact that the enormous growth of the “modern-day nomad” is rooted in the fact that the world economy has all but collapsed, now mired in a global economic depression of unemployment, low wages, and personal financial catastrophes.

While it sounds romantic, it’s often rooted in desperation.

Nevertheless, some of the stories begin in the following way:

If you look closely on city streets, campgrounds, and stretches of desert run by the Bureau of Land Management, you’ll see more Americans living in vehicles than ever before. It was never their plan.

“I wasn’t prepared when I had to move into my SUV. The transmission was going. I had no money saved. I was really scared,” said April Craren, 52, bundled in blankets atop a cot inside her new minivan, a 2003 Toyota Sienna.

She flipped the camera on her phone to show me the camp stove she uses to make coffee and her view of the sun rising over the Colorado River. She has no toilet, shower, or refrigeration.

After separating from her husband, April found herself homeless in June 2020, exacerbating the depressive disorder for which she receives $1,100 a month in disability benefits.

“I could have gotten an apartment but in a crappy unsafe place with no money to do anything at all,” she explained.

Last year, where April lived in Nixa, Missouri, the average rent for an apartment was $762, slightly less than the national average. Like nearly half of American renters, she would have been crippled by the cost.

It’s not surprising, then, that job loss, divorce, or, say, the sudden onset of global health or financial crisis can push so many over the edge.

Many Americans have found themselves trapped in a spiral of poverty from which they simply can’t recover.

At 52, April Craren didn’t choose this life. It was thrust upon her by unfortunate life circumstances. Craren couldn’t afford the exorbitant rent that is now average across the country on a fixed income. (Partly due to inflation but mostly due to the housing crash in 2008.)

The coordination of lockdowns and COVID restrictions have plunged the world into a deep depression of which we are only beginning to see. Even Wall Street couldn’t have caused this much damage.

“If the Great Recession was a crack in the system, Covid and climate change will be the chasm,” says Bob Wells, the nomad who plays himself in the film Nomadland. Thankfully, Wells was able to help Craren adopt her lifestyle so she can now survive as a “nomad” through his Home On Wheels Alliance.

Wells’s lifestyle was a choice. But the newfound interest in the nomadic lifestyle is not a choice for many.

Realizing he had something valuable to share, he bought the domain name Cheap RV Living in 2005. He posted tips and tricks about better vehicle-dwelling, but what he was really offering was a road map to a better life.

Four years later, when close to 10 million Americans were displaced after the Great Recession, traffic to his site exploded. Finding himself at the center of a growing online community, he decided to create a meet-up in Quartzsite, Arizona. He dubbed it the Rubber Tramp Rendezvous (RTR), and in January 2011, 45 vehicles showed up. Eight years later, an estimated 10,000 vehicles convened for what was said to be the largest nomad gathering in the world.

The event’s explosive growth is undoubtedly a reflection of America’s increasing interest in van life as an answer to the affordable housing crisis, an idea made accessible by Bob on his YouTube channel, also named Cheap RV Living, created in 2015.

The “increasing interest in van life” that Yahoo News refers to is not some petit-bourgeois fantasy being realized by privileged middle-class white kids, able to go home at any time. It is the necessity of formerly middle class, working-class, and poor people all across America who are out of work or are working but cannot afford housing.

Minimalism is a legitimate lifestyle for some; others have no choice

For many, this culture of minimalism is genuinely how they wish to live. Nomads have a genuine desire to see empty overconsumption come to an end. However, we can not ignore that minimalism is being promoted to prepare the Western population who are used to high living standards to accept those that are much lower.

Why do you think we continually see articles promoting insects as a legitimate dining option? Why are The Great Reset promoters at the World Economic Forum telling the public that they will soon own nothing and learn to love it?

Being a nomad doesn’t mean you can’t be prepared.

For those who are already nomads, whether by choice or forced by economic circumstance, it might be helpful to know that there are many prepping options available to you. There is no need to be left to the mercy of wherever you are right now.

I highly encourage you to access Daisy Luther’s article, “There’s Another Option Besides Hunkering Down and Bugging Out: Nomadic Living.” It will give you the perspective of someone who has voluntarily experienced and lived the nomadic lifestyle while also the mindset of remaining prepared for anything and everything.

At the rate the Great Reset is taking shape, many of us may find ourselves embracing the nomadic lifestyle, willingly or not.

Have you considered nomadic living?

Have you thought about nomadic living? If so, is it because you want to or because you have to? Are you getting to the point at which you may not be able to afford your rent or mortgage for much longer? Let’s talk about it in the comments.