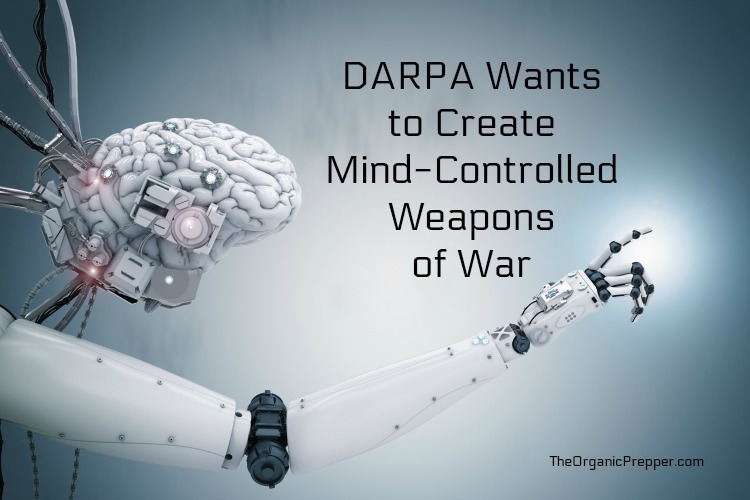 Last year, the U.S. Defense Advanced Research Projects Agency (DARPA) announced that it was seeking noninvasive ways “to achieve high levels of brain-system communications without surgery.” The techniques would “allow precise, high-quality connections to specific neurons or groups of neurons.”

The agency wants to create mind-controlled weapons of war, as it (vaguely) explained in two recent press releases.

DARPA wants soldiers to be able to control machines with their minds.

According to a press release published on May 20, 2019, the agency has awarded funding to six companies to support N3:

When the four-year program was announced last year, in a press release DARPA began by mentioning all of the positive things that brain-machine interfaces are being used for:

Over the past two decades, the international biomedical research community has demonstrated increasingly sophisticated ways to allow a person’s brain to communicate with a device, allowing breakthroughs aimed at improving quality of life, such as access to computers and the internet, and more recently control of a prosthetic limb. DARPA has been at the forefront of this research.

The state of the art in brain-system communications has employed invasive techniques that allow precise, high-quality connections to specific neurons or groups of neurons. These techniques have helped patients with brain injury and other illnesses. (source)

Sounds noble enough…until you get to the next line.

However, these techniques are not appropriate for able-bodied people. DARPA now seeks to achieve high levels of brain-system communications without surgery, in its new program, Next-Generation Nonsurgical Neurotechnology (N3). (source)

If you don’t find that chilling, keep reading:

“DARPA created N3 to pursue a path to a safe, portable neural interface system capable of reading from and writing to multiple points in the brain at once,” said Dr. Al Emondi, program manager in DARPA’s Biological Technologies Office (BTO). “High-resolution, nonsurgical neurotechnology has been elusive, but thanks to recent advances in biomedical engineering, neuroscience, synthetic biology, and nanotechnology, we now believe the goal is attainable.” (source)

They want this technology to be ready within the next few years.

DARPA wants to build brain-machine interfaces that match the performance of implanted electrodes but with no surgery whatsoever, in other words – and they want the technology SOON:

By simply popping on a helmet or headset, soldiers could conceivably command control centers without touching a keyboard; fly drones intuitively with a thought; even feel intrusions into a secure network. (source)

According to a report from IEEE Spectrum, “a DARPA spokesperson declined to comment on the amount of funding, but two of the winning teams are reporting eye-popping grants of $19.48 million and $18 million.” That report provides some additional details on the program:

Specifically, the program is seeking technologies that can read and write to brain cells in just 50 milliseconds round-trip, and can interact with at least 16 locations in the brain at a resolution of 1 cubic millimeter (a space that encompasses thousands of neurons).

The four-year N3program will consist of three phases, says Emondi. In the current phase 1, teams have one year to demonstrate the ability to read (record) and write to (stimulate) brain tissue through the skull. Teams that succeed will move to phase 2. Over the ensuing 18 months, those groups will have to develop working devices and test them on living animals. Any group left standing will proceed to phase 3—testing their device on humans. (source)

What will this brain-computer interface technology really be used for?

DARPA’s press releases on N3 are fairly vague, and the inner workings of the agency are a bit secretive.

In November 2018, The Atlantic published an eye-opening report on DARPA. Here are a few disturbing excerpts, but I highly recommend reading the report in its entirety.

DARPA has dreamed for decades of merging human beings and machines. Some years ago, when the prospect of mind-controlled weapons became a public-relations liability for the agency, officials resorted to characteristic ingenuity. They recast the stated purpose of their neurotechnology research to focus ostensibly on the narrow goal of healing injury and curing illness. The work wasn’t about weaponry or warfare, agency officials claimed. It was about therapy and health care. Who could object? But even if this claim were true, such changes would have extensive ethical, social, and metaphysical implications. Within decades, neurotechnology could cause social disruption on a scale that would make smartphones and the internet look like gentle ripples on the pond of history.

Yet DARPA’s work to repair damaged bodies was merely a marker on a road to somewhere else. The agency has always had a larger mission, and in a 2015 presentation, one program manager—a Silicon Valley recruit—described that mission: to “free the mind from the limitations of even healthy bodies.” What the agency learns from healing makes way for enhancement. The mission is to make human beings something other than what we are, with powers beyond the ones we’re born with and beyond the ones we can organically attain.

Human enhancement became an agency priority. “Soldiers having no physical, physiological, or cognitive limitation will be key to survival and operational dominance in the future,” predicted Michael Goldblatt, who had been the science and technology officer at McDonald’s before joining DARPA in 1999. To enlarge humanity’s capacity to “control evolution,” he assembled a portfolio of programs with names that sounded like they’d been taken from video games or sci-fi movies: Metabolic Dominance, Persistence in Combat, Continuous Assisted Performance, Augmented Cognition, Peak Soldier Performance, Brain-Machine Interface.

The programs of this era, as described by Annie Jacobsen in her 2015 book, The Pentagon’s Brain, often shaded into mad-scientist territory. The Continuous Assisted Performance project attempted to create a “24/7 soldier” who could go without sleep for up to a week. (“My measure of success,” one DARPA official said of these programs, “is that the International Olympic Committee bans everything we do.”). Jacobsen suggested that darpa’s neurotechnology research, including upper-limb prosthetics and the brain-machine interface, is not what it seems: “It is likely that darpa’s primary goal in advancing prosthetics is to give robots, not men, better arms and hands.” (source)

DARPA has been trying to create supersoldiers with robotic technology for decades, as Daisy Luther reported in Robot Apocalypse: “With Artificial Intelligence We Are Summoning the Demon”:

Over the years, DARPA has invested billions into exoskeleton suits for ground troops. This wearable robotic system gives soldiers the ability to carry heavier objects, run faster, and even leap over large obstacles. (source) Imagine trying to take on an enemy (or rogue soldier) who basically has superpowers.

However, DARPA is not the only entity that is messing around with mind-machine melding. Several companies and neuro-engineers – including Facebook and Elon Musk’s Neuralink – are also developing brain-computer interfaces.

Do you think DARPA’s intentions are good, or that the agency has nefarious reasons for developing this technology? Do you think it could be exploited and used to cause harm? Please share your thoughts in the comments.