Secrets of a Counterintelligence Agent: How to Increase Your Situational Awareness 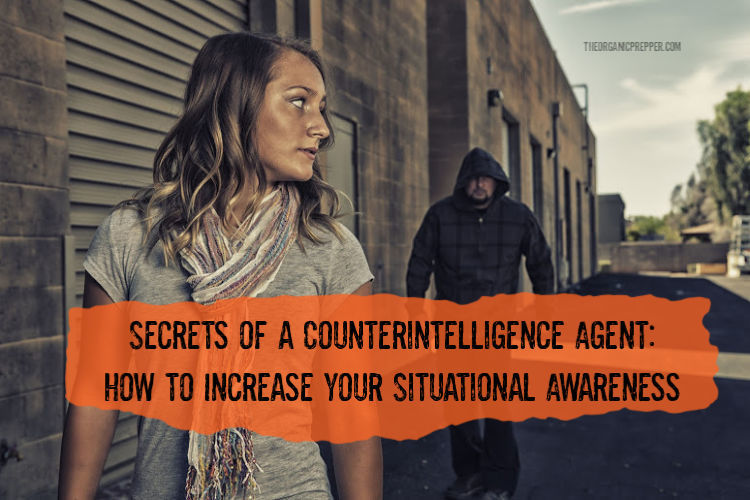 One of the things we constantly got in trouble for in the Army was lack of attention to detail. Missing a spot on your inspection boots (back when we used to have to shine our boots), an incorrect alignment of ribbons on your uniform, or forgetting a detail in the instructions you were given for the day could get you extra physical exercise or duty – or sometimes worse.

The reason they harped on attention to detail so much is that it’s one of the ways to train your brain to develop situational awareness.

Noticing the fine details of the terrain could help you track an enemy and realizing only one of the buildings on the block is clear of frost could tell you which one he’s hiding out in. Seeing the tripwire along the path to the door could save your life. Those details are out there to be seen but most people just never notice them. I’m going to explain a bit of how this works as well as how you can play a game called Kim’s Game that is not only fun, it’s a very effective way to develop your attention to detail as well as your situational awareness.

The Problem with Cooper’s Colors

One of the problems with how this is taught is that we’re all told to ‘stay in the yellow’, which comes from Colonel Jeff Cooper’s awareness color chart. White means you aren’t paying attention to anything, yellow means you’re actively paying attention to your surroundings, orange means you have some suspicion that something’s not right and are getting ready to react, and red means you’re actively responding to some situation. Some schools add black to the list, which is sometimes defined as when you’re immobilized by fear and sometimes defined as when you’re dealing with the aftermath of a situation. 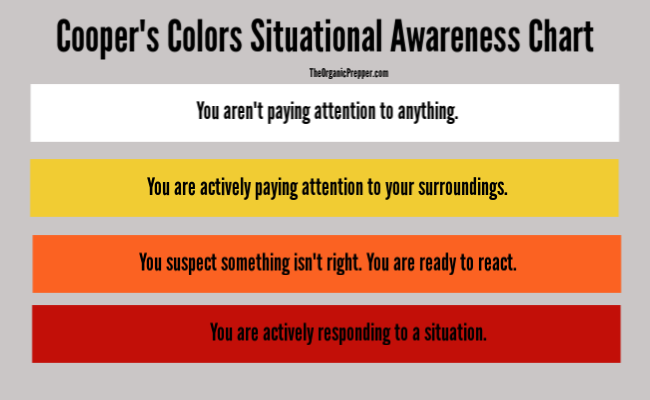 The brain just doesn’t really work that way. The way it’s taught is that you can go through life in white indefinitely because it doesn’t require any mental energy but that leaves you vulnerable to the world. They teach that you should stay in yellow, basically meaning constant vigilance. Yellow can be held for an extended time but it does require some mental energy to keep up.

The first problem with that is that your brain will shift out of yellow and into white on its own. How many times a day do you check your cell phone or drift off into a daydream or a memory or start thinking of what you’re going to eat tonight? Each time you do that, your brain goes on autopilot (white). Remember how we talked about ambush knife attacks? Increasing your situational awareness can help you respond faster to a potential attack.

I think being able to shift to yellow is certainly important but if that’s your only plan, you’re missing out on the most powerful part of your brain – your subconscious.

Training yourself to see minute details is part of the equation but if you’re not actively paying attention to look for those details, you’ll miss them – until you’ve practiced so much that just like driving, noticing details becomes second nature and automatic. The key is to not only train that gray muscle in your head to be able to notice things, but it’s also to do it so often and so consistently that your subconscious keeps a part of your brain on the lookout for those details. Train your brain to default to noticing and remembering details and it’ll start doing it without you needing to focus on it.

It’s important to develop the skill to notice details as well as the skill to remember those details later. Eventually, you need your brain to do this automatically. It takes quite a while to get to this point but it is possible. You also lose this skill if you don’t keep up the practice.

So how exactly do you develop this situational awareness?

One of the best ways we learned how to do this is through a game called Kim’s Game. This game is taught to agents of many agencies as well as Special Operations personnel, snipers, recon, and many others. The name comes from a game mentioned in the novel Kim by Rudyard Kipling in 1901. In the story, an orphan is trained how to be a spy by playing this game.

This game can be played in many different ways (and by the way, kids absolutely love this game if you’re creative with the rules). In the book, it starts with a tray full of jewels, as this quote attests:

Look on them as long as thou wilt, stranger. Count and, if need be, handle. One look is enough for me. When thou hast counted and handled and art sure that thou canst remember them all, I cover them with this paper, and thou must tell over the tally to Lurgan Sahib. I will write mine.

So the language there is a bit wonky but what it’s saying is that the guy put down a tray of jewels on the table and when they’re uncovered, Kim had to try to remember how many of each type of jewel and as many details as possible.

This way to play the game can be played with any group of objects. Even a handful of random coins could work. It’s a basic thing but it starts your mind working on focusing on details you wouldn’t normally notice.

One of the ways we would use this skill is for what you’d think of as casing a place. We’d walk into a coffee shop, grab a coffee, and once back in the car, we’d quiz the new agents on all the details of the shop. How many tables were there? Where were the cameras? Describe each customer. What were the names of all the baristas? What is the relationship of the two people sitting at the back table?

Some of these items would be just basic memorization but what about that last question? That one is one that you’d have to shift into the yellow for that answer. Are they both wearing rings? What’s their body language say about their conversation? Are they really in a relationship or are they actually foreign agents on surveillance, pretending to be in a relationship as a part of their cover?

Adapting Kim’s Game to your life

Something similar could be adapted to help you survive while traveling or in some dangerous scenario. Even though in your life you probably won’t really be looking for foreign agents, it is helpful to practice reading people’s body language and details to figure out how they know each other or what they’re talking about. The more your brain practices seeing demeanor, the more likely it is to notice when something isn’t right – and will let you know about it even if you’re not actively thinking about it. If you’ve trained your brain that it’s important to notice when things aren’t right, you don’t have to be in the yellow to notice.

There’s a simple adaptation to this game that you can play with your kids (or just by yourself) that can keep them busy on a road trip, and you can change the rules or the details as you see fit – and you should change them occasionally anyway. As you’re driving along, tell your kids that the game is on and that in three minutes, they’ll have to close their eyes and start writing. During these three minutes, they need to notice each car in the area as well as their license plates and any useful detail. Once the time is up, they can’t look outside anymore and have to write a list of every detail they can and compete to see who noticed and remembered the most.

Once they get good at that, change it so that instead of having three minutes to memorize everything, they’ll now start at some random point in the next 5-10 minutes. Once they’re better at that, expand that to the next half hour or so, and eventually don’t give them any warning. The more you play this game, the less priming you’ll need to notice and remember details of what’s going on in your surroundings.

Once you get the gist of it and have some practice with it, figure out some more applicable ways you can use this skill for personal protection or whatever scenario you think it’ll be helpful. Instead of training your brain just to notice license plates, see how many concealed weapons you can find in your day or pay attention to details of who you see throughout the day and try to figure out what they do for a living. Take a walk through the woods and see how many little footprints you can notice or any signs of an animal or person walking through an area. This skill is as much about noticing details as it is remembering them.

Eventually (with a lot of practice), you’ll see that your brain starts remembering these details on autopilot and you now have a useful skill that may someday save your life, or at least get you free drinks at a bar. Even the games that seemingly have no application to saving your life will help you by just exercising the brain so it can more easily notice and remember details.

How do you increase situational awareness?

Can you think of any creative ways you could play a similar game that are either fun or could help you develop survival skills? Do you play these kinds of games with your kids? Share your ideas in the comments. 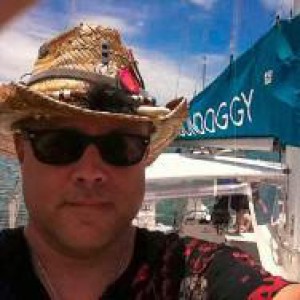