Local Intel: What I Learned from the Cop Staking Out My Street 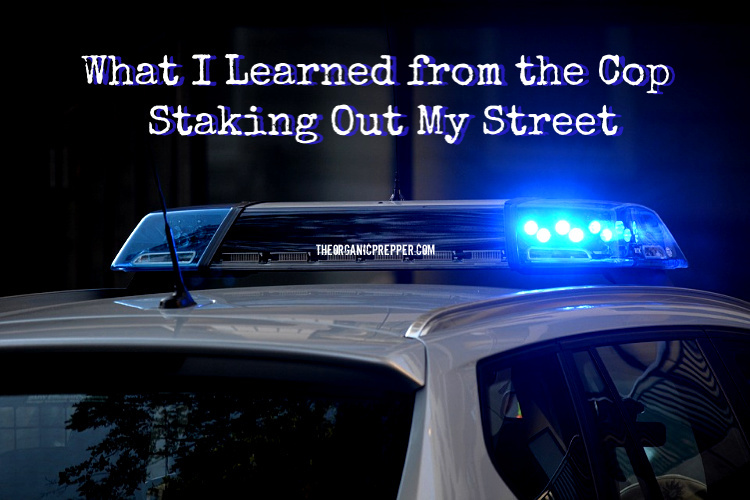 Last night, I walked across the street and introduced myself to the cop sitting in the car across from my house.

Every couple of nights for the past two weeks, I noticed a police car parking there at about 11 at night. The car would sit there for a while, then turn around in my driveway and leave. Last night, for once, I wasn’t already in my pajamas sipping on an evening Bailey’s when I noticed him pull up.

And I really wanted to know what the heck was going on.

No matter what you personally think of the cops, intel is intel.

Before we got any deeper into this story, let’s talk about the elephant in the room. Most folks fall on one side or the other on the “police” argument. They either think that cops can do no wrong and have a thin blue line sticker on the back window of their truck, or they feel that the police are just there to generate revenue and harass innocent people who are simply going about their day. While the minarchist in me chafes at things like speeding tickets, etc, I still try to form my opinions people by their actions and their respect (or lack of it) for others – regardless of the uniform they’re wearing.

But this article is not about that argument. In fact, it doesn’t really even matter which way you feel about cops to use the suggestions I’m about to offer.

Police officers can be an incredible source of information about the goings-on in your neighborhood. Since we recently relocated to a new neighborhood here in the same town, I’m hungry for the details.

Why was there a cop in front of my house every night?

So I was curious…why, in this pleasant neighborhood where people walk their dogs down the tree-lined streets by day and sit on their rocking-chair studded front porches with a cup of tea by night, would a police officer be staking it out on a nightly basis? And not just one police officer – some nights, two cars would sit across the street for hours.

And of course, there is always that little frisson of paranoia – was I suspected of doing something wrong in the eyes of the law? I knew this was pretty ridiculous since our family tends to be quiet and the only “illegal” thing I could think of doing was running out of poop bags while walking the dog. (Note: I went home, grabbed an extra bag, and ran back to pick up my pooch’s offering.)

When I saw the car pull up last night and stop, I went outside. I said, “Hi!” and waved to him non-threateningly from across the street.  Then I asked, “I was just wondering if anything was wrong since I see you sitting in front of my house every night?”

He got out of the car and walked over to my side of the road. He said, “No, there’s nothing wrong, really. But you’ll see us a lot, protecting the neighborhood.”

He went on to tell me that the apartment complex down the road was notorious for drug deals.

Playing the role of naive soccer mom, I asked, “Drug deals!!!! Oh my, are there meth labs there?”

He said, no, no, don’t worry. It was mostly lower level stuff. He assured me that there was virtually no violent crime in the neighborhood and that even property crime was incredibly low. And he heard my 140-pound dog’s deep, booming bark from inside the house. He said, “Even if there was property crime, they probably wouldn’t pick a house with a dog like that inside. People around here don’t want trouble.”

He was a pleasant guy and it was a nice conversation.

So, I learned some valuable information.

The cops watch the apartment complex as a deterrent, but it doesn’t sound like they bust people – at least not according to the local records, which I looked up on my computer as soon as I came inside. When I’ve driven through the complex, it’s pretty well kept. You can see that some of the folks may have lower incomes, but the children playing outside have warm coats and look clean. (Well, as clean as kids playing outside can look.) I noticed a fair number of young parents, and most of the people fit the demographics of the neighborhood around them.

It’s hardly a drug-riddled ghetto run by ruthless gang members toting Uzis. My guess is that someone there is selling a whole lot of weed, which I find less than alarming. Marijuana users aren’t the type to rob homes to get a “fix” and dealers aren’t generally violent criminals. Even in an SHTF situation, pot dealers aren’t that likely to try and take over the neighborhood like warlords.

Here are the things that I learned that are valuable from a prepper’s situational awareness angle.

Nothing earthshattering, but still, it was a collection of things that are good to know.

More importantly, I made a relationship with a source. I have the police officer’s business card with a cell phone number in case we “run into any trouble.” I asked him to let us know if there was ever something of which we needed to be aware. I also made a mental note to drop over some Christmas cookies next month because it’s never a bad idea to make contacts who are in a position to have valuable information.

It’s always a good idea to have sources.

It’s always a good idea to have your finger on the pulse of the neighborhood where you live. There are folks out there who can be good sources of information.

There’s a way to be friendly and seem personal without actually disclosing any private information. Think of the innocuous things you can discuss that seem like you’re sharing when you’re actually keeping most of your cards close to the chest.

Most of all, be open-minded enough to recognize a valuable source of information, regardless of your personal feelings about that person’s line of work – and that can hold true whether they’re the cops or the folks in that place the cops are watching. Being courteous to them doesn’t indicate your undying approval. Just try to treat everyone like a human being.

Your sources may be aware of an issue before you are and well before it’s reported on the news. If you can nurture relationships with the people in the know, you’ve got an early warning system. And in the preparedness world, knowing things before the gen pop can be a vital advantage.