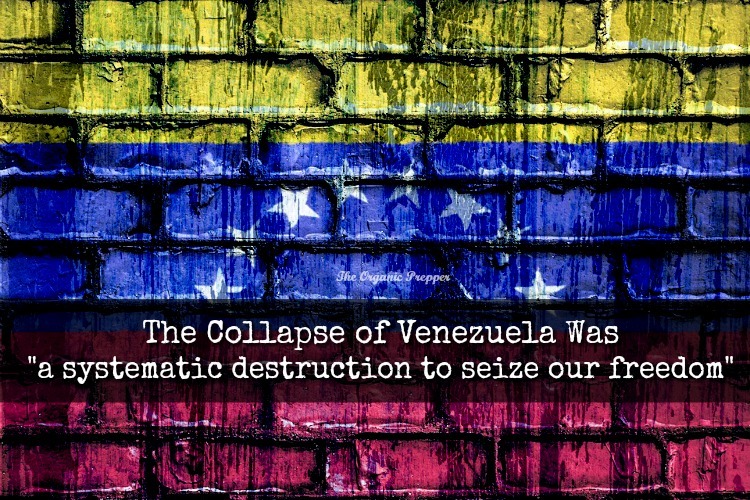 Editor’s Note: As we begin to become more concerned about the possibility of our own economic collapse, it’s important to see what has happened in other countries. Today, Jose explains how the collapse of Venezuela was deliberately engineered to make the populace bend to the will of a dictatorship. It didn’t happen all at once and most people never saw it coming until it was too late, and they were starving, oppressed, and dying. ~ Daisy

In this article, I would like to expose how this government-induced collapse has affected the psychological health of the population. And I would like to make special emphasis on the word induced.  The nature of the corruption cases has been so large, and the damage to our economy has been so wide, with such devastating effects, that there is no any doubt that this could never have been generated by ignorance, lack of the needed aptitudes and skills, or plain and simple negligence, nor combination of all these factors.

This was a systematic destruction of our institutions, our government structure, and way of life, to allow the government, against the will of the people, to seize our freedom and our democratic system.

What is a crisis?

Let’s formally define what a crisis is.

A harmful, hazardous situation lived by a person or community as a consequence of an unexpected and sudden change in their living conditions. This situation is a threat to their welfare; physical integrity, social and economic stability, and the usual way to face adversity.

This can result that the person crashes down, or otherwise, gets their guts together to overcome whatever they have to face. As it can be supposed, the magnitude of the impact is proportional to the threat, to the personality and the previous mind and body health of the individuals, of the support they could have,  and most importantly…of the preparedness level the people had.

The impact has been divided by the experts into 3 stages:

Stage 1: The Warning. This exists just when there is a previous warning between the initial awareness and the occurrence of the event, such as a hurricane. In this stage, the individuals shall be able to foresee the real dimension of the hazard to be able to act accordingly to mitigate or minimize the damage.

In unprepared communities the impact is huge. In the case of Venezuela there were a lot of things people could have done, but in our society the concept of preparedness is almost unknown, and this can´t be addressed enough. Even those who were aware of the possible situations, like us, saw our preppings swept out in a few months. A dictatorship taking place with bloody and lethal force was something that, despite what some readers may say, was not present even in the worst nightmares of Venezuelans.

Stage 2: The impact phase itself. The gangs took control of the food supply system, under the government’s eye in broad daylight. The military was designated via a presidential bill to seize food companies (including Cargill, and lots of other basic staples producing enterprises). The rationing became more and more common in the entire territory. Then a huge black market appeared, and medications and food disappeared suddenly. The military controlled a large corporation, CASA, in charge of IMPORTING food, instead of producing.

Huge business and bribes are involved here, therefore this was, to my eyes, one of the main signs about what was going to come, and I was not wrong. But the reactions are as different as persons. My main reaction was to prepare a “vacation” trip overseas, as our preps were not going to be enough and my job was a waste of precious time. The salary wouldn’t buy two weeks worth of food (now it does not cover even a week). So I bought my ticket 5 months before the trip and dedicated my time to other online jobs paid in foreign currency, to survive a few weeks while I could settle down and get my family out. Still a work in progress, though.

Having one of my most desired possessions in this world, a motorhome in good shape, would have saved us a LOT of money and it would be right now a very valuable asset. Renting an empty lot in a subdivision to park the RV, would have provided us a more solid condition to migrate.

Stage 3: The aftermath. The common feeling among my former coworkers who are in the middle of the collapse who did not prepare (basically all of them) are now struggling, and I mean, REALLY having a hard time. Their salary is not enough even for food. The benefits, like a full coverage medical insurance that was once the envy of the rest of the working class, are now useless. Doctors have migrated, there are no medications in the private hospitals either, and the coverage is not enough because of the high inflation rates. Those who worked 11 hours a day without developing a plan B, relying just on the company work, are getting their backsides kicked, and I am not lying: they STARVE.

Even with both of the adult members of the family working, their joint salary, benefits and special savings assignations the company provided (12,5% of the salary was additionally paid so the employees could have a savings ability) is not enough. A former coworker, engineer, and his wife, an engineer as well, told me via social networking that his family had been eating just white rice three days in a row. If this is not under your definition of collapse, then please let me know.

The rationing that should be once a week is not arriving to them but once every month and a half of the previous amount if they’re lucky. People want to get out and can’t. They need to buy food and can’t. They need medical care and can’t get it. They need to fix their cars and can’t afford the parts, not even an oil change. Crime is rampant. Kids have been kidnapped at gunpoint from the doors of their schools.

To me, this is the collapse. There was NOT any possible way to prepare for this, I think, other one than but bugging out  outside of the borders of that politically-induced mess until the dust settles down.

The reactions of the rest of the expat communities all over South America, the receivers of most of the Venezuelans who could leave, have been, in my opinion, appropriate. There have been blossoming NGOs to assist those who had to stay and those who are migrating in desperation.

There have been people who fell into such deep depression that they have commited suicide. Every week the news reports one or two self-inflicted deaths. Official media is under heavy censorship. This is not something that you are going to see in the world media.

In the hospitals, the children dying from malnutrition are registered with some other cause of death. Those pictures we used to see from Ethiopia, now we see it in the main social networks, but the children are white, with straight hair and clear brown or green eyes this time. But they are indeed starving, just like the Ethiopian people.

What could be done?

I am not the kind of person who stays sitting for too much time. I look for solutions to problems. It’s in my blood.

I am going to be creative now, and you will have to allow it to me so we, as a prepping community perhaps could submit some solutions. (I am already working in a project with nutrition specialists, agronomical engineers, and some other people with more experience in this stuff than I have.)

That is what preppers do, after all, don’t we?

In our Venezuelan example, with a worthless currency these solutions could be life-saving.