CIBC, A Huge Canadian Bank, Was Offline All Day, Proving Again The Dangers of a Cashless Society 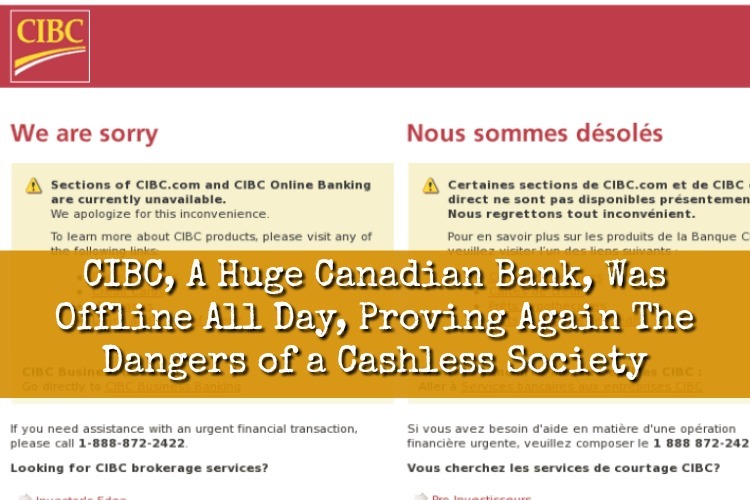 Yesterday, CIBC reported a “systems issue” that prevented customers from logging in to their accounts online for the entire business day. CIBC, the Canadian Imperial Bank of Commerce, is one of the five biggest banks in Canada. Yesterday just happened to be the day that people receiving welfare, unemployment benefits, social insurance payments (like American social security), Canada Pension payments, and disability payments landed in the accounts of recipients.

Customers could still use ATMs and Point of Sale features but were unable to log into their accounts to check balances, transfer money, or make online payments. The sentiments of normally patient Canadians online were … tense.

The system was restored around 8 pm last night but that wasn’t soon enough for people who wanted to pay their bills by the due date or make business transactions.

Ironically, this online banking catastrophe occurred a day after Victor Dodig, the CEO of CIBC, predicted that nearly all transactions would soon be taking place online.

…almost all transactions will soon be conducted remotely, rather than in person, as customers continue to take more of their business and daily lives online.

“We see continued migration of clients to do transactions remotely,” CIBC CEO Victor Dodig said Wednesday during his bank’s institutional investor conference in Montreal. “You’re seeing 87 per cent of transactions now being done remotely. And we think it’s going to get to 96 per cent over the next four to five years.” (source)

But perhaps this migration has more to do with CIBC closing branches. Physical locations where you can walk in and see a teller are going the way of the Canadian penny. (It’s no longer being made because production costs were 1.6 cents per coin.)

Since before 2000, CIBC has been closing dozens of branches every year. And it isn’t just CIBC that is closing branches in Canada. It’s a trend across all the Big 5 banks and thousands of jobs have been lost.

So the question is, do Canadians actually “prefer” online banking, or do they have no other choice due to physical location closures?

This makes me think of the whole push toward a cashless society.

For a long time now, Big Finance has been “nudging” people along toward an end that would benefit them greatly – a cashless society.

If a powerful institution wants to make people choose a certain thing, the best strategy is to make it difficult to choose the alternative.

We can illustrate this with the example of self-checkout tills at supermarkets. The underlying agenda is to replace checkout staff with self-service machines to cut costs. But supermarkets have to convince their customers. They thus initially present self-checkout as a convenient alternative. When some people then use that alternative, the supermarket can cite that as evidence of a change in customer behaviour, which they then use to justify a reduction in checkout employees. This in turn makes it more inconvenient to use the checkout staff, which in turn makes customers more likely to use the machines. They slowly wean you off staff, and “nudge” you towards self-service.

Financial institutions, likewise, are trying to nudge us towards a cashless society and digital banking. The true motive is corporate profit. Payments companies such as Visa and Mastercard want to increase the volume of digital payments services they sell, while banks want to cut costs. The nudge requires two parts. First, they must increase the inconvenience of cash, ATMs and branches. Second, they must vigorously promote the alternative. They seek to make people “learn” that they want digital, and then “choose” it. (source)

It won’t surprise many people to learn that this has links to Marxist philosophy.

The Italian philosopher Antonio Gramsci developed the concept of cultural hegemony out of Karl Marx’s theory that the dominant ideology of society reflects the beliefs and interests of the ruling class. Gramsci argued that consent to the rule of the dominant group is achieved by the spread of ideologies—beliefs, assumptions, and values—through social institutions such as schools, churches, courts, and the media, among others. These institutions do the work of socializing people into the norms, values, and beliefs of the dominant social group. As such, the group that controls these institutions controls the rest of society.

Cultural hegemony is most strongly manifested when those ruled by the dominant group come to believe that the economic and social conditions of their society are natural and inevitable, rather than created by people with a vested interest in particular social, economic, and political orders. (source)

Oh yay. Who doesn’t love being “nudged” along the road to Marxism and a cashless utopia? (This is sarcasm. Hold the angry comments and emails.)

Here’s why a cashless society is dangerous.

A cashless society is a danger to freedom. And this is why we should embrace cold hard cash, precious metals, and the barter system.

Most of the folks who will read this article will already be on board with this philosophy, but here is one of the best explanations I’ve read about the dangers. From The UK Guardian…

Digital systems may be “convenient”, but they often come with central points of failure. Cash, on the other hand, does not crash. It does not rely on external data centres, and is not subject to remote control or remote monitoring. The cash system allows for an unmonitored “off the grid” space. This is also the reason why financial institutions and financial technology companies want to get rid of it. Cash transactions are outside the net that such institutions cast to harvest fees and data.

A cashless society brings dangers. People without bank accounts will find themselves further marginalised, disenfranchised from the cash infrastructure that previously supported them. There are also poorly understood psychological implications about cash encouraging self-control while paying by card or a mobile phone can encourage spending. And a cashless society has major surveillance implications.

Despite this, we see an alignment between government and financial institutions. The Treasury recently held a public consultation on cash and digital payments in the new economy. It presented itself as attempting to strike a balance, noting that cash was still important. But years of subtle lobbying by the financial industry have clearly paid off. The call for evidence repeatedly notes the negative elements of cash – associating it with crime and tax evasion – but barely mentions the negative implications of digital payments.

The UK government has chosen to champion the digital financial services industry. This is irresponsible and disingenuous. We need to stop accepting stories about the cashless society and hyper-digital banking being “natural progress”. We must recognise every cash machine that is shut down as another step in financial institutions’ campaign to nudge you into their digital enclosures. (source)

It only took one day of the CIBC debacle to remind people of why digital transactions are at the mercy of the computers and those who control them.

The people who are pleading for the “progress” of a cashless society, the ones who can’t wait to get their debit card embedded into their arms as an RFID chip – they aren’t seeing the bigger picture. That’s the picture of them, losing everything they have at the whim of a bank, a prosecutor, or a computer error. It’s the picture of every single thing you buy and every transaction you make being tracked, filed away, and one day used against you.

And without cash, you just handed all of your control to someone else.

Hat tip to Connie from Canada