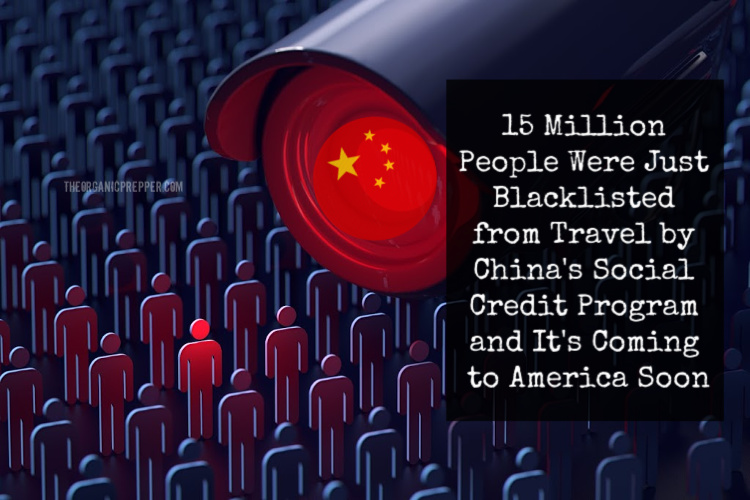 China’s social credit system is in full swing and has already blacklisted more than 15 million Chinese residents from travel. Is it coming soon to the U.S.?

It’s a system of surveillance and governance using a social scoring system based on the state’s perceived trustworthiness of the individual. Not only are social media and financial accounts tied into a person’s “score” – much like a credit score number – but also friends and associates are compelled to distance themselves from an offending person, otherwise, their score can be dropped too.

The program is called the Sesame Score. Symbolically this represents “open sesame”or doorways that are eithe r opened or blocked to the individual who tries to move freely.

This is every totalitarian government’s ultimate dream: a society that polices itself, its thoughts, its beliefs and each other.

It’s the ultimate power imbalance and crushes individual will. If such a scoring system should be used it should be in cases of state or institution accountability such as checking politicians’ funding sources or Glassdoor.com where employees and interviewees can evaluate companies to let others know about the real company culture. But social scoring cannot work the other way around in a free society.

The ramifications of this are perfectly encapsulated by the episode of Netflix’s futurist show Black Mirror called “Nosedive” in season 3 episode 1, where a woman trying to boost her social credit status quickly takes a turn for the worse. Out of all the shows in the series, that episode makes my heart pound right out of my chest because it seems the most real of all the surreal dystopian themes. It’s panic-inducing to realize as you’re watching it that this nightmare is happening now and could happen to you shortly.

Although China’s social credit system had the goal of being in use by 2020, it’s already in full bloom in some regions such as Hangzhou, southwest of Shanghai. Mainstream media reported that the program is optional but that is not really the case because the very nature of the program compels people to join or “die” as you will see.

Millions of Chinese nationals have been blocked from booking flights or trains as Beijing seeks to implement its controversial “social credit” system, which allows the government to closely monitor and judge each of its 1.3 billion citizens based on their behaviour and activity.

The system, to be rolled out by 2020, aims to make it “difficult to move” for those deemed “untrustworthy”, according to a detailed plan published by the government this week.

It will be used to reward or punish people and organisations for “trustworthiness” across a range of measures.

A key part of the plan not only involves blacklisting people with low social credibility scores, but also “publicly disclosing the records of enterprises and individuals’ untrustworthiness on a regular basis”.

“We will improve the credit blacklist system, publicly disclose the records of enterprises and individuals’ untrustworthiness on a regular basis, and form a pattern of distrust and punishment,” the plan states. And, if you don’t make the cut, “everywhere is limited, and it is difficult to move so that those who violate the law and lose the trust will pay a heavy price.”

As a result of the new social credit system, the government blocked 11.14 million residents from flights and 4.25 million from taking high-speed trains as of May.

Again, not really an “optional” program when you are literally blocked from getting on a plane.

“This is potentially a totally new way for the government to manage the economy and society,” economist Martin Chorzempa from the Peterson Institute for International Economics told The New York Times in July.

“The goal is algorithmic governance.”

If that isn’t scary enough, the stated goal of the program according to Hou Yunchun, former deputy director of the development research center of the State Council, is to make “discredited people become bankrupt.”

Some of the “good” behaviors include:

Good behaviors can result in:

While some of the “bad” behaviors include:

Although not clearly outlined, some of the punishments for social credit infractions are thought to be:

It should also be reiterated that part of the ratings come from all the people around you.

Firstly, China is a growing world superpower. If the U.S. wants to play ball, or play other countries’ markets for that matter, they may have to acquiesce to the system. Sadly, China’s government appears to treat its nation as a “test ground” of sorts for social engineering.

Furthermore, a report by The Guardian discusses how China’s social credit system will interfere with other nations’ sovereignty. It says that the system is already shaping the behavior of foreign businesses and is “reaching beyond China’s borders to impact foreign companies.”

Secondly, as OP readers pointed out in the comments section of Daisy’s report, MyLife.com already exists.

What started out as a “friend finder” or one of those “get a report on this person” websites, now uses social media, government information, financial accounts, personal reviews from others and more to give someone their own score. And it can be used to check for job suitability.

“Reputation is more important than credit. Only MyLife provides public Reputation Scores based on public information gathered from government, social, and other sources, plus personal reviews written by others.” –MyLife

You can even look yourself up. You might be surprised to find out you’ve been scored. It will even definitively show you whether you are “good” or “bad.” Those are the actual labels you are given. Talk about omnipotence…But DO NOT provide any information, especially your email. It’s a baiting site.

Lastly, America is launching biometric retina scanners starting at Atlanta International Airport. I first saw the machines in the airport in 2012 so I knew it was only a matter of time before Real ID and retina scanners slid into normal use. We probably don’t balk at this type of news any more thanks to Facebook.

So, yeah, social credit scoring is already here in the U.S. but it’s up to us to decide where it goes next.

If you need more proof that America is gearing up for a social credit system, just look at the one that many people – maybe even you – probably use every day. It teaches people to be divisive and block others for expressing beliefs that are different from their own or the approved social agenda.

Just think about how social media started out under the banner of self-expression and connection.

Facebook is the perfect testing ground for social policing.

It is of utmost importance that we circumvent such privacy violations as much as possible and take up a fighting stance.

I’m with Daisy on this one. Among all the battlefronts there are in the more independent communities, this one may be the most important and should be fought tooth and nail before anything else. We can’t let our children be forced to choose between being outsiders; the dregs of society with no rights or access to resources, or else totally immersed in the system; probed beyond anyone’s wildest imaginations with no real identity except one that is state-sanctioned.

What do you think of China’s new social credit system and travel restrictions?

Do you think it’s coming to America/Canada/Europe? Will it include travel restrictions? Sound off below!