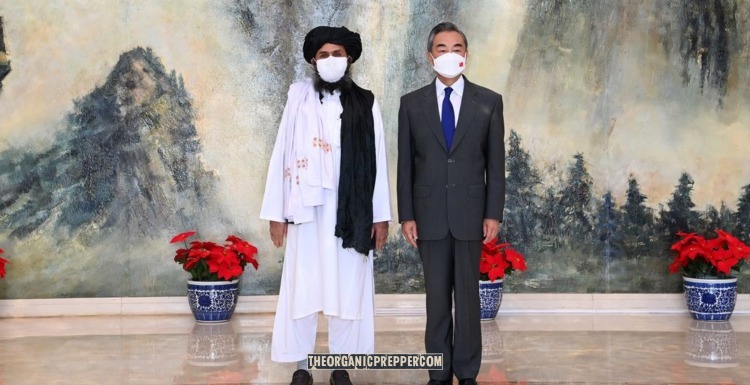 Why is China so interested in Afghanistan? Not content with buying up land and businesses in the United States and Europe, now they’re apparently ready to “help” Afghanistan.

With the United States technically no longer active within Afghanistan, have the Chinese stepped in? And, just how deep into the country are they? Let’s take a look.

For starters, it helps to know some basic geography

China and Afghanistan share a border through incredibly mountainous and rugged terrain for 47 miles along China’s Xinjian province. Consequently, due to the border sharing, China has a direct land connection with the nation.

“We know that they are there, that they are present,” a Pentagon spokesman revealed to Military Times, without going into specifics. [source]

Beijing stated they would invest $62 billion into Afghanistan to aid the development of China’s $3 trillion Belt and Road initiative. (BRI) [source] This Chinese initiative is a massive project to develop its road and port infrastructure throughout Asia and Europe. However, as multiple European diplomats and the American think tank C4ADS point out, China designed BRI to tip the “balance of power in favor of subsidized Chinese companies.” And it will significantly improve the scope of Chinese power on a global level. [source]

Halfway through August, Beijing stated they were looking forward to deepening “friendly and cooperative” relationships with Afghanistan. [source] By month’s end, US troops virtually abandoned the country, leaving behind millions of dollars in state-of-the-art military weapons and technology.

Immediately there was speculation from those in the West that this would lead to American weapons in Chinese hands. [source] South Carolina governor, Nikki Haley, said in an interview with Fox News, “We need to watch China because I think you are going to see China make a move for Bagram Air Force Base.” [source]

Further fueling speculation was the fact that Western embassies evacuated Afghanistan in droves. Yet, the Chinese embassy conspicuously remained. The only visible change was Taliban security forces surrounding the Chinese embassy instead of the original Afghani government security. [source] Around the same time, Taliban spokesman Mujahid stated China would be their primary partner in rebuilding Afghanistan. [source]

On September 7, we heard reports that Chinese military personnel are conducting feasibility studies on taking over Bagram Airfield, once the largest US military base within Afghanistan. Reports trickled in that China was discussing four other former US airbases as well. China vehemently denied such accusations, with Chinese Foreign Ministry spokesperson Wang Wenbin saying, “I can tell you this is purely fake news.” [source]

Reports still indicated that Chinese personnel had met with the Taliban to discuss the matter. Many were skeptical of Beijing’s denial. Yun Sun, director at the Stimson Center think tank, said, “Given their past experience, the Chinese must be eager to get their hands on whatever the US has left at the base.” [source]

On September 9, CNN reported that China had announced it would give the Taliban approximately $31 million worth of food, winter equipment, medical supplies, and COVID shots. [source] It was within this same month that the Taliban invited China, Russian, Turkey, Pakistan, Iran, and Qatar to a celebration to commemorate the beginnings of their newly held reign.

One month later, reports from several sources claimed multiple Chinese military planes flew into Bagram Air Force Base. [source] October 2, the base was lit up at night as planes came in for the first time since the US withdrawal. (Something previously thought impossible for the Taliban to accomplish “due to their lack of expertise or equipment for it.” [source]

When questioned about the matter, the Taliban expressly denied any Chinese troop presence within the area. [source]

Donald Trump would say, however, that “tremendous numbers” of American weapons are currently being sold on the black market, and the weapons left behind were going to benefit both Russia and China. [source]

Apparently, China is not only interested in Afghanistan. According to reports on October 28 from Reuters and others, China is providing $8.5 million to finance the building of a base for police in Tajikistan near the Afghan border. A parliamentary spokesman told AFP that Tajikistan’s lower house approved the plan to build the base and, “All construction is funded by the Chinese side. After construction, the base will be transferred to the Tajik (police)…” [source]

However, China’s foreign ministry spokesman Wang Wenbin told reporters he is unaware of the plan to build a base.

What is it about this constant warzone that appeals? Is it US military technology or perhaps the world-renowned lithium deposits – essential for rechargeable batteries? [source] Maybe it’s the mean by which this would help the Belt and Road Initiative? Is it something else entirely or a conglomeration of all these elements? Share your thoughts in the comments.

Regardless, I don’t believe there’s any doubt – China seems to have developed quite the stake in the future of Afghanistan.