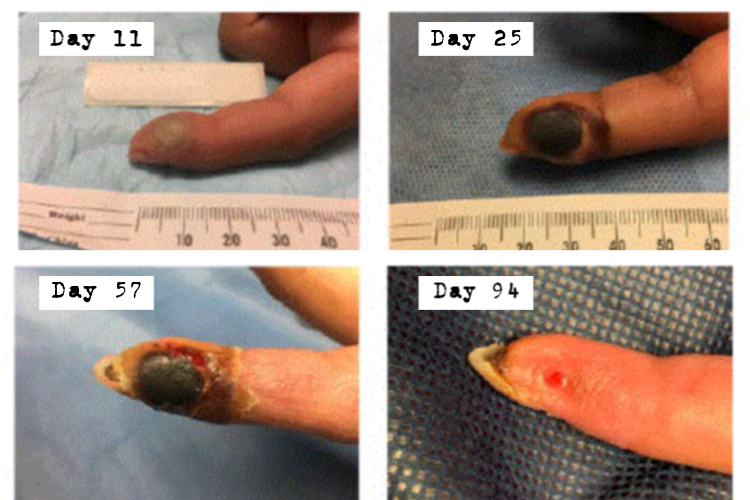 In December 2018, a lab technician was injecting a mouse with the Vaccinia Virus (VACV) when she accidentally stuck her own finger with the needle. According to the CDC’s case report, she immediately rinsed her finger with water for 15 minutes, notified her supervisors, then went to the emergency room.

Between days 2 and 9 post-infection, the patient was evaluated by two community physicians; neither advised her to observe contact precautions to prevent auto-inoculation or secondary transmission. (source)

It should probably be pointed out that this happened almost a year ago and yet this was just published by the CDC on October 25, 2019, in the CDC’s Morbidity and Mortality Weekly Report (MMWR).

Secondly, the Vaccinia Virus is contagious – it can be spread through physical contact, and yet the technician was not told to observe “contact precautions”, at least by the community physicians. While it is known that the tech’s recovery took approximately 4 months, the focus of the published report (as indicated in the title itself) was of the “novel treatment” that was performed. Folks, these facts ought to make you a bit nervous.

Ten days after the infection the technician was evaluated at an occupational health clinic where the treating physician contacted the CDC, which advised monitoring her for evidence of worsening infection.

Twelve days post-infection she was treated at a university-based ER for a fever, a general feeling of illness, pain, and worsening swelling of her finger. This means she was seen at two different facilities, and by at least three different doctors, possibly without taking precautions to prevent others from getting infected. I say ‘possibly’ because while she wasn’t told to by supervisors, she may have taken precautions on her own. We can only hope.

The threat of Poxviruses

Contagious, often deadly, and naturally occurring (meaning it exists in nature), smallpox was considered eradicated around the globe by 1980. With the exception, of course, of the two labs that currently hold samples of the smallpox virus for research – although the one in Russia did have an explosion in September of this year. That being said, I sometimes wonder how long it will be before tight-lipped Russian authorities speak up if any smallpox was leaked out… But that’s just my opinion.

According to the National Library of Medicine at the National Institutes of Health, smallpox is caused by an agent referred to as the variola virus, also known as VARV, and strictly affects humans. Most researchers agree that the first reliable descriptions of smallpox were found in ancient Indian medical treatises that had been compiled by the 1st–4th centuries. It wasn’t until 1796 that a vaccine was created by a man named Edward Jenner who had observed that milkmaids who previously had caught cowpox did not catch smallpox. While it’s not the exact same vaccine we have today, according to the World Health Organization there is a physical stockpile of smallpox vaccines held at various locations around the world – just in case.

At this point, I have to say ‘Hold on – not so fast there’. Smallpox is but one virus from the Pox family, known as Poxviruses (members of the Poxviridae family). Smallpox may be eradicated, but what about the others? Let me say, for clarity if nothing else, I’m not an epidemiologist. I have never done laboratory research on anything more than the odd creature in high school biology. But what I’ve read makes me nervous.

VACV is supposedly a very mild poxvirus and is used today as a live vaccine for other poxviruses like smallpox, and for experimental testing for cancer cures.

As pointed out earlier, Vaccinia is used for vaccines and vaccinations and is also Poxvirus. And there are a lot of poxviruses; just go here and click on any of the little + beside each one to see the genus. If you click on Orthopoxviruses, you’ll see both the Variola Virus (Smallpox) and the Vaccinia Virus (Smallpox Vaccine).

Included in the poxviruses is Monkeypox. The monkeypox virus is rare but belongs in the same genus as both vaccinia and smallpox. Despite the rarity, in 2003 there was an outbreak of monkeypox in the United States, and it was the first time human monkeypox was reported outside of Africa.

It was determined that a shipment of animals from Ghana imported to Texas on April 9, 2003, introduced the monkeypox virus to the US and there were 37 confirmed cases, with 18 of them in Wisconsin. It was transmitted to humans via infected prairie dogs purchased as pets. In this outbreak, the CDC, USDA, FDA, and other agencies assisted in containing the outbreak and many were advised to get the smallpox vaccination. For those infected, however, there is currently no proven safe treatment for the monkeypox virus infection. (If you recall, a virus usually must run its course – antibiotics only work on bacterial infections.) For purposes of controlling it, however, antivirals can be used.

The Brazilian Journal of Infectious Diseases, in April of 2010, stated that Brazil had experienced numerous outbreaks related to the vaccinia virus since 1960 by several research groups in differing regions:

Episodes of Vaccinia virus infection in people who work at research laboratories have already been reported by the Center for Disease Control and Prevention (CDC), contributing to increase the number of infection cases. The virus infection has occurred both in individuals previously vaccinated in childhood, and in people never vaccinated before. Transmission usually occurs through accidental inoculation of vaccinia virus through lesions in fingers and eyes, or through auto-inoculation. (source)

The journal entry goes on to say that in addition to laboratory infection, cases of person-to-person contamination have also been reported. Those cases are closely related to the vaccination of militaries against the smallpox virus. Some of those cases of infection were possibly transmitted through sexual contact between military members and non-military members. One case was reported in a pregnant woman that was bitten by a dog previously vaccinated against rabies, and many vaccinia virus infections in Brazil can be characterized as zoonotic infections as they occur in human beings who work directly with cattle.

What are the signs and symptoms of Poxvirus infection?

The symptoms can vary depending on the genus, but the CDC lists the following:

Within 1-3 days a rash usually appears, and the whole infection can last a month easily. Thankfully there are ways we can help prevent a poxvirus infection.

Are you prepared for an outbreak?

In the future, we may never have to worry about poxviruses. I, for one, hope that’s the case, but it’s certainly worth it to be prepared in case we do.

For more information on viruses, bacteria, and even preparing for a possible pandemic, I recommend reading the following:

Would you rather know at the time or after the fact? How much do you think is being hidden from us about this type of research? Share what you think in the comments. 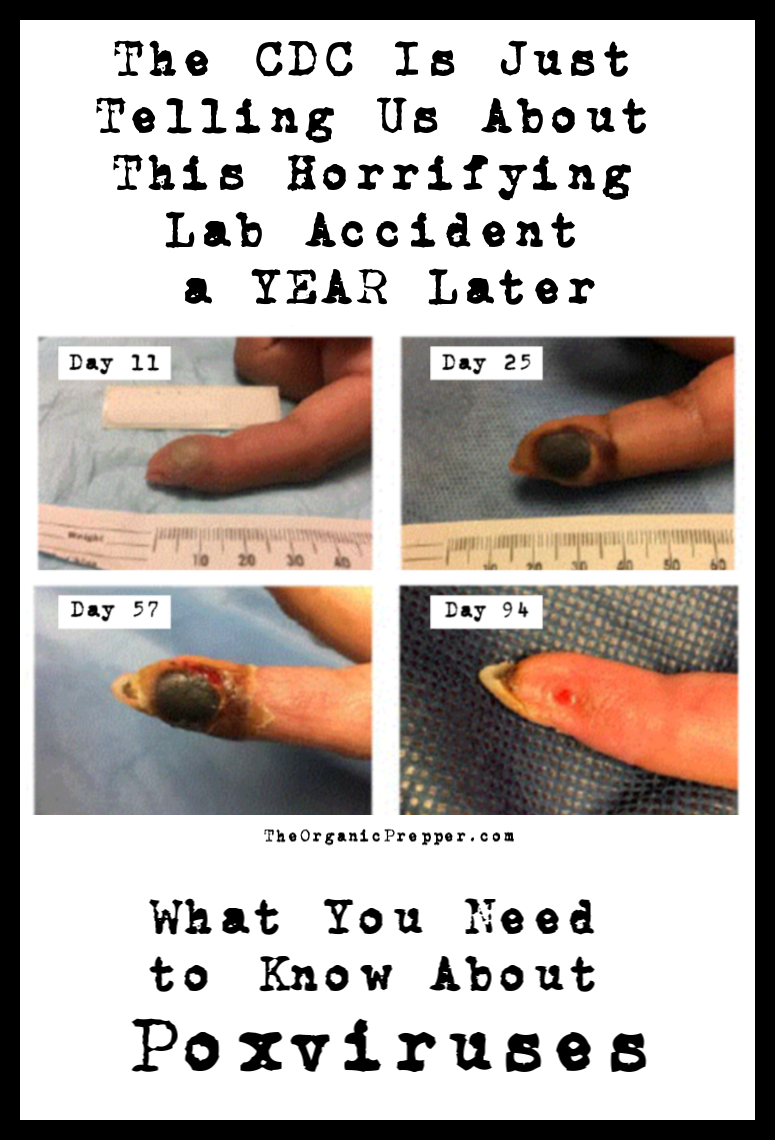