CBS Exploits and Humiliates Poor Families for Your Viewing Pleasure 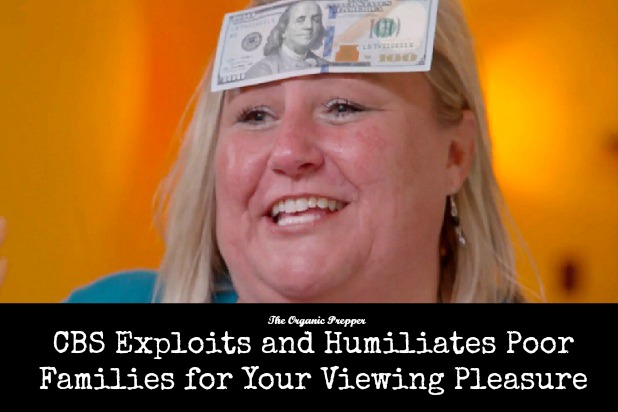 Well, CBS understands and they are giving all of the broke people the opportunity  to win a life-changing amount of money.

All you have to do is get on television, cry some, grovel a lot, and beg for it.  You can choose to look like a greedy jerk or look like a benevolent saint. As a bonus, producers get to edit the footage to make you look even more pathetic and tear-stained.

If this sounds a lot like entertainment created for the denizens of The Capitol in the movie, The Hunger Games, that’s because it is. This is a real life hunger games, aired for our viewing “pleasure,” in which desperate people are pitted against one another for survival, while wealthy people are amused by the saga.

This revolting show is called, “The Briefcase.”

THE BRIEFCASE features hard-working American families experiencing financial setbacks who are presented with a briefcase containing a large sum of money and a potentially life-altering decision: they can keep all of the money for themselves, or give all or part of it to another family in need. The series premieres Wednesday, May 27 (8:00-9:00 PM, ET/PT) on the CBS Television Network.

These people, who are right on the edge of financial catastrophe, are offered an amount of money that will allow them to get their heads above water again. But the network doesn’t hold back on guilting the living hell out of the people to try and convince them to give the money away to another family who might need it more.

These people, who are poor due to the events in life that could happen to any of us: job loss, major medical expenses, etc., are manipulated into thinking it’s wrong to look out for their own. And to put the icing on the cake, they’re treated to this guilt trip on national television.

They go to see the other family’s homes and learn about their sad, sad stories also. Stories about lost limbs, disabled children, hunger, high-risk pregnancies, and failed businesses. There’s genuine anguish when the people are forced to choose between their own desperate families and someone else’s.

Here’s the trailer, in which the network sounds downright benevolent, and the regular folks seem downright pitiful as they share the issues that caused them to get into their current financial bind.

“It’s not the money but the journey” according to CBS, as they humiliate poor people publicly.

I call BS on that.

When you are so broke you have to choose between electricity and food, it’s absolutely the money. Everything is about the money. Buying diapers vs. formula is about the money. Buying toilet paper or toothpaste is about the money. You live and breathe your desperation all day long, and at night, you can’t sleep because of it. No matter how hard you try to claw your way out, it seems like the deck is stacked against you, as bank charges pile up, bill collectors call relentlessly, and better jobs are some ephemeral thing that other people get.

This “entertainment” sounds like as much fun as going to an arena and watching Christians being ripped apart by starving lions.

You know how the networks carefully place ads based on the demographics of the audience? What does it say when the ads for a show like this are for Cadillacs, high dollar electronic devices, and credit cards? This show is for rich people, so they can be entertained by the plight of poor people.

We’re supposed to be a civilized society, but it seems to me that we’re going backwards if this is what people enjoy watching on a Wednesday evening. Getting rid of network and cable television has never seemed like a better decision.