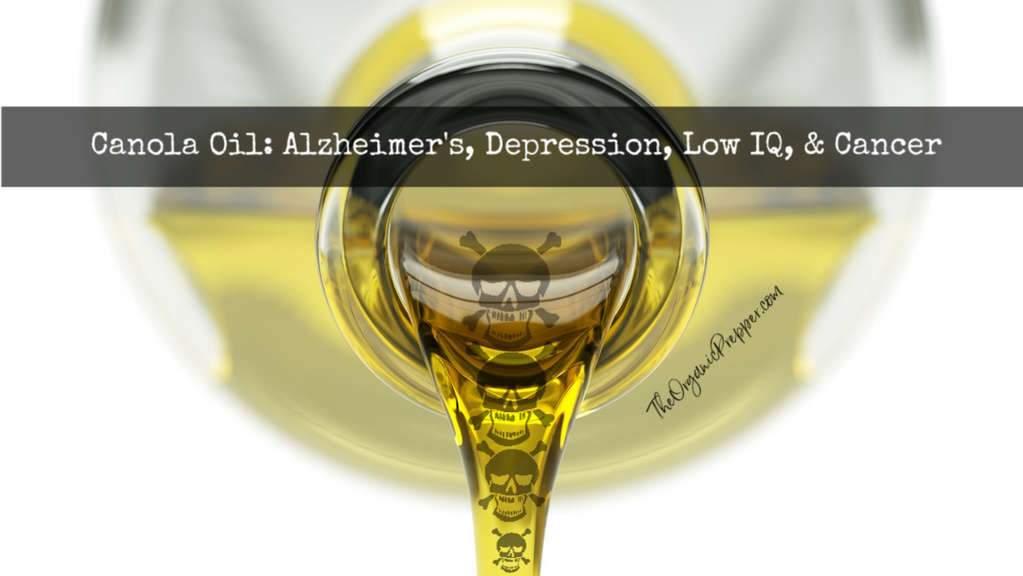 Could canola oil lead to Alzheimer’s or other problems with the brain?

Previously, we reported that canola oil is actually damaging to the heart and cardiovascular system, contrary to media reports. It is genetically engineered and derived from a specially bred rapeseed plant and goes through an incredible high-heat and chemical process before it reaches the store.

We know this oil is anything but heart-healthy – but that’s not where the problems stop.

There is a ton of misinformation about canola oil on the internet – enough to make a person’s head spin. I’m sorry to report that a lot of this bad information comes from alternative health websites and it doesn’t help people make informed decisions.

One example of detracting information is that canola contains “the infamous chemical warfare agent mustard gas” because it is a member of the mustard family. Does that mean broccoli and cabbage are agents of terrorism too? Should I hit the deck when I throw mustard leaves into my compost pile? They are also part of the same Brassica family of vegetation.

Yet another claim is that rapeseeds were initially used in cattle food and were the true cause of Mad Cow. This rumor says that Mad Cow symptoms disappeared when rapeseeds were no longer used in animal feed. This often repeated information comes from a book called Young Again by John Thomas and is difficult to verify. When this rapeseed strain was initially introduced, it was likely fed to pigs, too, so where was the Mad Pig disease? You can read what he says at this link and tell us what you think. (It may be true that the rapeseed created brain problems that mimicked the symptoms of Mad Cow.)

And lastly, the biggest source of misinformation comes from mainstream and the medical communities who promote canola oil as heart- or brain-healthy. In this video, on YouTube, you can see that canola oil is wrought through a lengthy process including some industrial chemical baths that you won’t find in an ingredients list.

But these aren’t even the reasons to avoid Canola Oil, as you will see.

Recent research claimed that high-fat diets were linked to exacerbation of Alzheimer’s pathology. But we’re not talking healthy fats like avocados, nuts and coconut oil. When you look at the fatty American diet, where is most of that fat coming from?

Canola oil is the new favorite oil of fast food restaurants because of how cheap it is. Is it really so coincidental that there are now more inflammatory illnesses?

But that’s not all, there’s more research specific to canola oil.

In an unrelated study published online in the journal Scientific Reports in December 2017 shows specifically that Canola oil in the diet is linked with worsened memory, worsened learning ability and even weight gain.

Researchers used a mouse model to examine the effects of a diet rich in canola oil versus a normal diet on brain tissue. One group of mice was given the human equivalent of two teaspoons of canola daily, the other group was fed a normal diet; both groups were observed for six months.

At the end of the study, the research team found that the mice fed canola oil had significantly worse working memory than the control group. And their brains showed a reduction in a particular peptide, amyloid-beta 1-40, which the researchers said leads to an increase in the toxic amyloid proteins associated with Alzheimer’s disease.

Fast food is among the biggest sources of Canola oil exposure. In yet another study, fast food was found to lower the future IQs of teens and had a lasting future impact on the brain.

The findings reveal that consumers of fast food are 51 percent more likely to develop depression than minimal or non-consumers.

Furthermore, the connection between the two is so strong that “the more fast food you consume, the greater the risk of depression,” said Almudena Sánchez-Villegas, Ph.D., lead author of the study.

And there’s a cancer risk, too.

Some vegetable oils contain PUFAs – Polyunsaturated Fats that are heat sensitive and carcinogenic when heated.

Not only is Canola oil heated at high temps when it is being processed but is also heated and reheated when it is used for frying food. This releases toxic compounds now linked to cancer, heart disease, and brain issues.

In 2015, The Sydney Morning Herald reported:

Cooking with vegetable oils releases toxic chemicals linked to cancer and other diseases, according to leading scientists, who are now recommending food be fried in olive oil, coconut oil, butter or even lard. The results of a series of experiments threaten to turn on its head official advice that oils rich in polyunsaturated fats – such as corn oil and sunflower oil – are better for the health than the saturated fats in animal products. Scientists found that heating up vegetable oils led to the release of high concentrations of chemicals called aldehydes, which have been linked to illnesses including cancer, heart disease and dementia. [emphasis mine]

Professor Martin Grootveld at De Montfort University said, “For decades, the authorities have been warning us how bad butter and lard was. But we have found butter is very, very good for frying purposes and so is lard.” They found that fish and french fries fried in vegetable oils like corn, sunflower and Canola could produce 100 to 200 times more toxic aldehydes than the safe daily limit set by WHO. Corn oil was one of the worst offenders while coconut oil was considered the safest.

Is all canola oil rancid?

Because of the heavy-duty processing and deodorizing that Canola oil goes through, it is considered by many to be a rancid product before you even open it up. Additionally, its Omega-3 profile might make it more prone to spoiling quicker. Another term for rancid might be oxidized.

Keep in mind that a Harvard expert has revealed that the omega-3s and other benefits are destroyed in processing and through repeated heating.

In your body oxidized means damage to your cells and tissues, especially to the areas rich in fat like your brain. You know what happens when an apple is exposed to air? Oxidation is the process that turns it brown and makes it go bad. If you eat vegetable oils that are already oxidized from heat and light in processing, you are exposing your own healthy tissues to a volatile substance which will damage them. (Book: The Mood Cure by Julia Ross via Source)

How to Avoid Canola Oil

A list of all the foods and brands that use canola oil would be far too long for this article.

To protect your heart and brain, steer clear of the following foods and check all ingredients lists:

Protect your brain by switching to these methods and oils.

The more you opt for a real food or whole food diet and prepare foods at home, the less likely you are to be overly exposed to inflammatory, carcinogenic vegetable oils.

The following sources of fat are demonstrably safe to eat and use for sauteing and baking.

Consider these healthy fats for dressings or non-heated uses:

Where does any food with canola oil – even organic – belong?

And certainly not in the health food store.

It’s going to take a long time to petition the health food companies to STOP using canola oil. They are doing it because it’s cheap and they can ride the “health” wave. But health food store owners should know better than this.

When you see health food companies using the same rancid, heavily heated oils as all the fast food chains – watch out.

Another sign Big Food is there to destroy your health is their giddy embrace of canola oil.

Do you use canola oil?

Has this second article on Canola Oil convinced you of its detrimental health effects? What oils do you like to use in your foods? 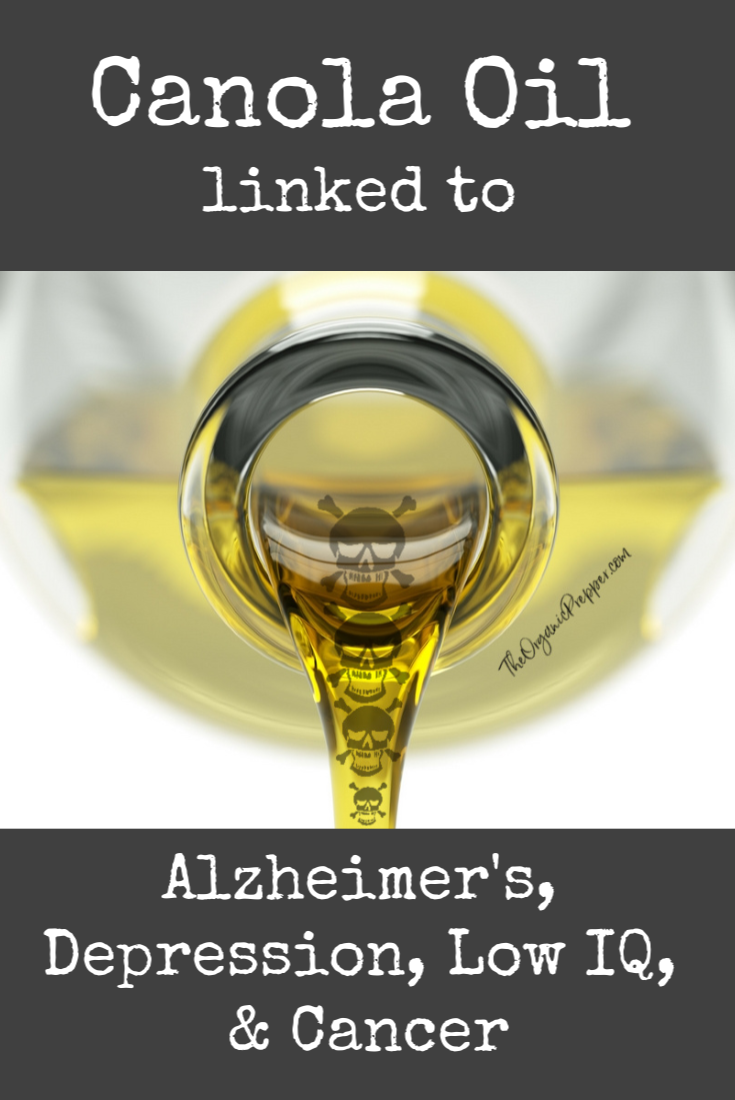