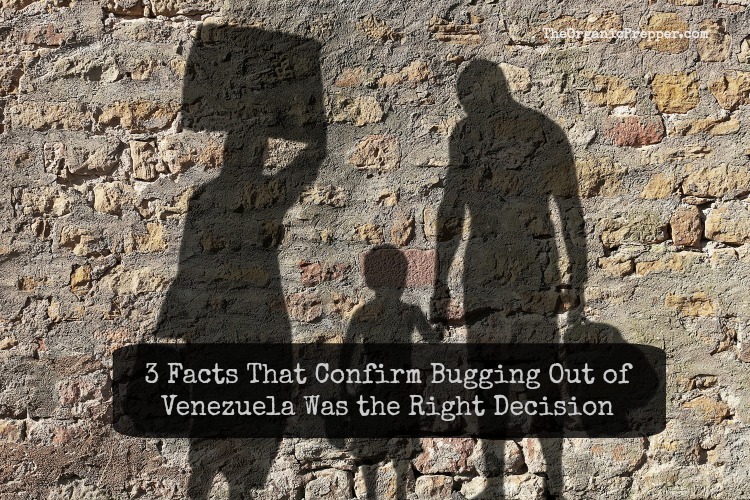 I received recent reports that confirm the severe fuel scarcity in my former town is getting conflictive. There are struggles with the national guards and citizenship, and there is at least one person in jail I know of, at the moment of writing this.

Here are three reasons my decision to bug out of Venezuela was a good one:

The gasoline shortage in Venezuela has gotten much worse.

I am going to review some of the reports of the city of Maracaibo. It is considered the economic capital of the country because it produced very good quality oil and there was money flow all over the place. Large buildings, luxury subdivisions, good roads. Despite the burning sun and hot weather, people there love their city. The oil revenues really went to the infrastructure, managing of the public money was not as corrupted as it was in other eras.

The person reports to me that, through the window can be seen a large line of cars that covers several blocks in length, 6 or 7, the gas station is closed. There is no sign or any indication it is going to open anytime soon. The cars in line are parked since the day before, waiting for the station to open. Once open, people will come around from everywhere, and the queue will be much longer until the fuel runs out.

There is a terrible shortage of gasoline now that hasn’t been present ever, with the effects particularly strong in the interior of the country, much less populated that major cities, although lately, it is beginning to feel more in Caracas. This sense of normality they want to project in Caracas is because the enormous barrios were once the major support of the chavismo. It´s impossible to know how many people have left those barrios to look for better conditions in the rest of South America.

This is sad, but we could say that nowadays the most expensive gasoline in the world could be the Venezuelan one. How many man-hours are lost by those who spend a day in a line?

Prices for other goods keep rising.

It happens with all kind of goods. I saw posts in buying/selling groups an air conditioner selling by 450$, and two weeks later the same ad of the same business in 500$. Many merchants do not receive $1 bills. The smallest bills they accept are $5.

Beggars are everywhere, they come to you in the car window, in the gasoline line within a few minutes apart, or sometimes they approach the people near the supermarkets. Kids under 10 years old begging not for money but for food, even a cookies package.

Trading with cash is difficult. The cash is almost not available, and it has to be spared in case you find something to buy…because you can´t trust in the power grid being operational to run the payment platform, should you need to buy something. If you pay in cash, a better price can be obtained.

In the dark streets, there are mountains of garbage. The collection service is insufficient. There are beggars and robbers everywhere and you have to be extra careful.

Electricity is being rationed, so there are long periods of darkness.

With respect to energy, there are daily cuts of light in the city. The regional government, ruled by a Chavista warlord imposed a 6×6 scheme (six hours with electricity, six hours without electricity). Although rarely this is true. Sometimes they let the service run for a little more time, but most of the time is less. The power is rationed by sectors. They take off the energy from some entire parts of the city to provide to others, then vice versa. There are sectors where people go through 18 hours with electricity and 6 without, or 6 hours with and the rest without. It’s unpredictable. This has caused many inhabitants to leave Maracaibo to other regions, and others have accelerated preparations to leave the country.

A few days ago one of the “leaders” in charge of the energy problem came to the city. That day, there was no cutting off the power, all day. What a coincidence. By the way, she did not come to discuss the solutions to the problem. Instead, brought a lot of power plants to deliver to gas stations, and avoid public turmoil and protests.

This indicates that they do not have the slightest intention to solve the problem.

Many businesses have closed, and many that are still open are only accepting cash.

The entire city looks like a ghost town. No matter if it is in the middle of the day, or at night. There are relatively few cars in the streets, as most owners are in the gasoline lines (the person who reports me this do not to pass even close to a gas station: the streets have become large parking lots where it is difficult to pass through). Others prefer not to use their cars to work. Those who live relatively close to their jobs go on foot and walk or use their bicycles to ride great distances. The others, have no other solution but to use the “perreras” or trucks without any facilities for human transport: cattle trucks, and all kind of inadequate vehicles, as you can see in some pictures that are all around the world. Just like Cuba in the Special Period. Many shops and businesses have closed. The calculations are around 65% of businesses are in bankruptcy.

A decent amount of food can be found. Not in the quantity and variety we would like, but there is. Sometimes you do not get chicken, so you replace it with meat, or pork, or maybe some fish…and so on. But obviously, it is very expensive, with respect to the real salary that is not sufficient to provide to a family but for a couple of days or less. By the way, as I reported previously, in an increasing trend, lately many establishments are accepting only dollars in cash. Before, this happened only in some shady business in the downtown, always with a low profile and for regular customers. But now this is happening even in the big supermarkets and chain stores. This allows some people who receive remittances from their families abroad, or have their income from another source than a salary, to acquire goods more expeditiously. This is not formally legal: the dollar is not the current currency, but, well…yet, it is used, and it will continue so until something else happens.

The grid is not stable or reliable.

There are continuous short circuits in the power network, with sparks in wiring and transformer explosions in every city. This generates instability in the circuit that damages all kind of white line domestic devices unless they are properly protected.

This is a huge warning sign no matter how stable you believe your grid is. If you don’t have means to procure alternate energy for your basic needs, like a fan in summer and juice for your refrigerator to avoid your food spoiling (as I have learned in the social networks that tons of people have suffered in Caracas, which had been more or less untouched by the crisis), you are going to be in trouble. I don’t know what kind of event you prepare for. I would not prepare for a specific catastrophe. My planning was not as accurate as I thought it would be. As I mentioned in previous articles, this has been lasting too long. There was no possible way to prevent it.

Thanks for your reading, and thank you for all the assistance you can send every now and then, as it is much appreciated these days.

You are great, and I hope my story can shed some light into what we are going through, and help you improve your prepping.