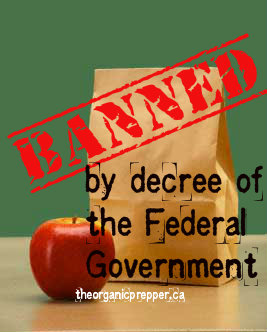 It looks like the days of trading half of your peanut butter and jelly sandwich for half of your best friend’s ham sandwich may soon be over if the federal government has anything to do with it.

A Richmond, Virginia mother received the following note, telling her not to pack a lunch for her pre-school age child. (source: Momdot.com) 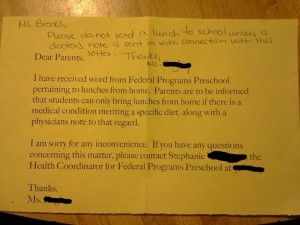 I have received word from Federal Programs Preschool pertaining to lunches from home. Parents are to be informed that students can only bring lunches from home if there is a medical condition requiring a specific diet, along with a physicians note to that regard.

I am sorry for any inconvenience. If you have any questions concerning this matter, please contact Stephanie [redacted] the Health Coordinator for Federal Programs Preschool at [redacted].

As a family, we have made the decision to avoid a host of ingredients that are all found in abundance in school lunches.  We don’t consume:

But this week at my daughter’s school, the offerings are:

There is not one thing on that list that falls into our normal diet. Add a side of rBGH-filled milk and a corn-syrup laden “fruit cup” and you have a complete nutritional disaster.

Why should the parents be required to bear the expense of a doctor’s visit to get the required note to be allowed to send healthful, homemade lunches for their children?

It’s all about profit and control.

Because, you see, the federal government must have all the little children on board in order to subsidize the farmers, make the rich richer, and make the poor sicker.  Throw in some Obamacare to treat the resulting nutritionally-driven illnesses and it is a win-win situation – at least it is if you own a food processing plant, a medical facility, or a factory farm and you’re not the ones eating that so-called food.

Agricultural surplus is used to provide a base of food which is provided to the schools free of charge.  It is then turned into processed junk for the public school system while the food manufacturers profit.  The National School Lunch Program, enacted in 1946, has a mission besides just feeding hungry children: to subsidize the agricultural business by using up beef, cheese, and pork.  The school lunches are loaded with these artery-clogging ingredients, in the most processed forms possible.  According to an article in the NY Times, here’s how it happens:

The Agriculture Department pays about $1 billion a year for commodities like fresh apples and sweet potatoes, chickens and turkeys. Schools get the food free; some cook it on site, but more and more pay processors to turn these healthy ingredients into fried chicken nuggets, fruit pastries, pizza and the like. Some $445 million worth of commodities are sent for processing each year, a nearly 50 percent increase since 2006.

The Agriculture Department doesn’t track spending to process the food, but school authorities do. The Michigan Department of Education, for example, gets free raw chicken worth $11.40 a case and sends it for processing into nuggets at $33.45 a case. The schools in San Bernardino, Calif., spend $14.75 to make French fries out of $5.95 worth of potatoes.

The money is ill spent. The Center for Science in the Public Interest has warned that sending food to be processed often means lower nutritional value and noted that “many schools continue to exceed the standards for fat, saturated fat and sodium.” A 2008 study by the Robert Wood Johnson Foundation found that by the time many healthier commodities reach students, “they have about the same nutritional value as junk foods.”

In addition, the management companies have a cozy relationship with food processers, which routinely pay the companies rebates (typically around 14 percent) in return for contracts. The rebates have generally been kept secret from schools, which are charged the full price.

So, lots of people are making money while feeding children nutritionally bereft garbage. People who don’t know how to cook are warming up processed junk to feed to kids who cannot afford anything better.  That free lunch isn’t so free when you consider the high percentage of kids suffering from obesity and chronic illnesses due to their poor nutritional intake.

Public schools serve more than 4 billion meals every year — a number that would make many fast-food chains envious — and officials say all those lunches are contributing to the growing health crisis among kids. According to the Centers for Disease Control and Prevention, obesity rates have doubled in children and tripled in adolescents since 1980, spurring an epidemic of type II diabetes, once considered an adult-onset condition. Obesity has also been associated with heart disease, arthritis, and certain cancers, and researchers have found fatty streaks in the blood vessels of children as young as 10.

“USDA needs to relate the current crisis in kids’ health to the meals that are being served, especially to poor kids, because that’s the population that’s most vulnerable,” says Antonia Demas, director of the Food Studies Institute, a child-nutrition group based in upstate New York. Because low-income children often eat both breakfast and lunch at school, “they get at least two-thirds of their calories from school each day, and they’re the population really showing an increase in the diet-related diseases.” (source)

As with anything the federal government touches, school lunches are cloaked in do-gooder benevolence, but they are a poisoned gift that benefits those who already have money at the expense of our society’s most vulnerable people: poor children.  As our economy continues to decline, more kids will be forced to take these “free lunches” if they expect to have anything to eat all day.

So, now, at least one school wants children to have a doctor’s note to say no to the school lunch offerings of hormones, GMOs, preservatives, and grease.  They must have the permission of a professional to avoid  junk food. A parent’s good judgement is not sufficient, it seems, to make the healthy decision to provide a toxin-free lunch. Does anyone else see the irony here?

Kids are a target. The school system is trying to change the rules to force us to feed our children these food-like substances and to disallow us the right to nourish them as we see fit.  By controlling the food that our kids eat, they are controlling their entire lives, right down to their ability to think critically, their future fertility, and their overall lifespans.

We are lathering our skin with petrochemicals. BPA is leaching into our food and beverages.  Chemtrails and questionable farming methods are tainting the air that we breathe…it’s enough for a book, not merely an article.  Additives like MSG and unpronounceable non-food ingredients are killing off our brain cells and triggering the growth of cancerous cells in our bodies.

And the result of all of this?

If it was only one toxic assault, or maybe even two or three, you might be able to write this off as accidental, something that just happened due to carelessness.  But with all of the evidence proving irrefutably that the food we eat, the water we drink, and the air we breathe is making us sick, how can we form any other conclusion than the one that states, “This is a deliberate attack.”

All of the alphabet agencies that are supposedly there for our protection are merely arms of the giant propaganda machine.  They are there to convince us that “someone” would put a stop to it if these things were actually bad for us. They are there to dispense a false sense of confidence in our governing bodies and to make us feel as though our health and safety is their first concern.

Moderation is not an option.  We have to fight back through strict avoidance.

Would you willingly feed your child just a “little bit of cyanide”?  Would you let them have a serving of strychnine “once in a while”? Would you purposely give them a cigarette just because you “happened to be out and that is what was offered”?  Would you let them drink bleach from the laundry room as long as it wasn’t in an amount that would be immediately deadly and if it was diluted so that it didn’t burn their throats when they swallowed it?

Our politicians, government officials, and “protection” agencies are bought and paid for. They are at best, complicit, and at worst, the ones instituting this. (source)

A sick, fat, malnourished populace isn’t too likely to gear up for a resistance against the powers that be when it feels like effort just to go from the couch to the refrigerator.  It’s game-on for the Great American Genocide, and today’s target is your child.