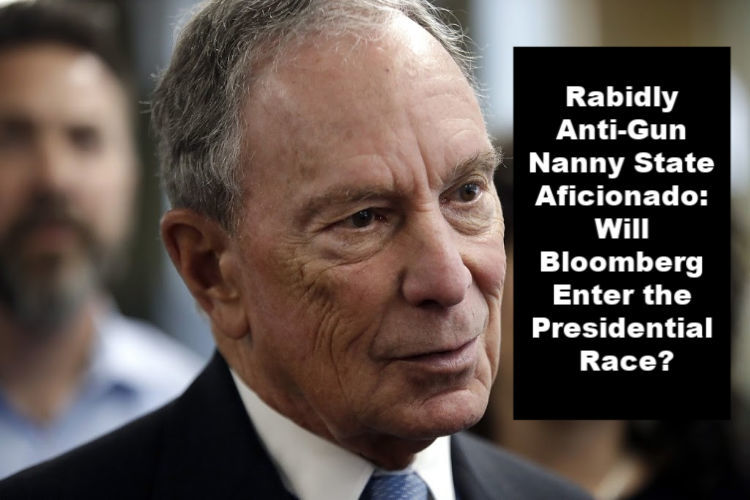 In a last-ditch effort to save the Democratic party in the next election, former New York City Michael Bloomberg “is actively preparing to enter the Democratic presidential primary.” (source)

It’s important to note that I’m not a fan of politicians in general, so rest assured, if you are a Democrat and you love these candidates, I’m sure it won’t be long until I’ll insult some Republicans, too. For some reason, we seem to choose the worst people in America to run for office and then insist people choose “the lesser of two evils.” But that is a rant for another day.

The Democrats have offered some lackluster candidates while getting ready to take on Donald Trump in the 2020 Presidential election. Let’s do a quick run-through of the front-joggers – because, let’s be honest, there are no front-runners. Remember, this is a quick rundown. I’m writing an article here, not a novel.

Widely thought to be the leading candidate, Warren has been caught in numerous lies over the past years to try and make herself seem more approachable and victim-y.  Who can forget her claims of being Cherokee being debunked by a DNA test that showed her heritage was just 1/1024th Native American? Warren has been claiming this since at least 1986 when she said she was an “American Indian” on her Texas state bar registration. Warren also lied about losing her job because she was visibly pregnant.

She has plans to tax the crap out of rich people, promising it won’t affect those of us in the middle class. However, given her track record of sweeping lies, one might not wish to hold one’s breath that she’s being honest about this. How else will she pay for all the “free” stuff she’s planning to give us all?

Former Vice President Joe Biden was at the front of the pack for a while despite his cringe-worthy history of hair sniffing and inappropriately touching girls and women. But he sort of apologized and then people thought he was cool again. (I’m not sure what people thought this but clearly someone did because they let him on the debate stage.)

But the thing they couldn’t hide was his addled behavior on multiple occasions. 76-year-old Biden got confused and faced away from the cameras while giving a speech, he claimed that Margaret Thatcher (who’s been dead for 6 years) is concerned about Trump’s presidency, and he has been repeatedly confused about where the heck he is.

Bernie Sanders, the most outward socialist in politics was building up a lot of steam. If you recall, last time around he was robbed of the Democratic nomination when it was given to Hillary Clinton, even though he had the votes. But then the 78-year-old candidate had a heart attack.

It hasn’t ended his run – he’s back on the campaign trail and some news outlets are optimistic it “boosted” his candidacy. I, however, am doubtful that people will be confident he has the health and stamina to handle the job.

The former mayor of South Bend, Indiana did really well in Iowa which has given a lot of people hope. At 37 years old, Buttigieg is the first openly gay man to run for President. But are his Obama-esque promises of “hope and change” enough to topple Trump? Thus far, it doesn’t look good for Buttigieg.

He wants to raise the federal minimum wage, get rid of for-profit prisons, ditch the electoral college, restrict the daylights out of gun rights, legalize weed, and tax the crap out of rich people. Since he was virtually unheard of outside his own area until he stepped into the ring of the Dem primary, it might be difficult for him to gain the momentum needed to win the presidency.

Gabbard is like the cross-eyed, red-headed stepchild of the primary. The Congresswoman from Hawaii is probably the only person running who could appeal to the undecided voters and those who prefer a more moderate view. But she’s antiwar so the establishment hates her. Hillary Clinton super-duper hates her and said she was in cahoots with the Russians, ironically the highest form of “you’re a contender” there is these days.

As much as I approve of her anti-interventionist stance and respect her cojones in standing up to Clinton, Google, and everyone else trying to screw her out of the nomination, there are things you must note about her. Gabbard has quite a few socialist leanings and she is an avid supporter of gun control legislations. A lot of people think that Gabbard is going to part ways with the Democrats and run for President as an independent candidate.

Of course, there are other candidates – it started out as an enormous field. Still hanging in there but unlikely to achieve much is Kamala Harris – who Gabbard attacked for her shocking record as a prosecutor. Harris’s numbers plummeted after that and while she hasn’t officially withdrawn, she might as well save herself some unneeded stress and step away from the campaign.

Then there are all the other people who make you say “who???” when you hear their names, like Andrew Yang, Amy Klobuchar, Cory Booker, and Tom Steyer, all polling at 2% or less.

It looks like we may have a late contender in the shape of Michael Bloomberg, an ultra-liberal billionaire from New York City.

Mr. Bloomberg, the former New York City mayor and billionaire businessman, has been privately weighing a bid for the White House for weeks and has not yet made a final decision on whether to run, an adviser said. But in the first sign that he is seriously moving toward a campaign, Mr. Bloomberg has dispatched staffers to Alabama to gather signatures to qualify for the primary there…

Should Mr. Bloomberg proceed with a campaign, it could cause a seismic disruption in the Democratic race. With his immense personal wealth, centrist views and close ties to the political establishment, he would present an instantaneous threat to former Vice President Joseph R. Biden Jr., who has been struggling to raise money and is already defending his ideologically moderate base on multiple fronts…

…Mr. Bloomberg, 77, initially bowed out of the 2020 race because of Mr. Biden’s apparent strength, but he has since grown skeptical that Mr. Biden is on track to win the Democratic nomination and he does not see the two leading liberals in the race, Senators Elizabeth Warren of Massachusetts and Bernie Sanders of Vermont, as strong candidates for the general election.

But Mr. Bloomberg would face a difficult path in a Democratic primary largely defined so far by debates about economic inequality. His presence in the race would offer fodder to the party’s rising populist wing, led by Ms. Warren and Mr. Sanders, who contend that the extremely rich already wield far too much influence in politics. He is a former Republican who registered as a Democrat ahead of the midterm elections last year. And his mayoral record, including his support for stop-and-frisk policing and his championing of charter schools, has the potential to alienate pillars of the Democratic Party’s political base. (source)

The NYT goes on to say that Bloomberg has contacted some people high up in the Democrat hierarchy such as former Senator Harry Reid of Nevada and Gov. Gina Raimondo of Rhode Island, the chair of the Democratic Governors Association.

A few things to remember about Bloomberg

Here are just a few things to remember about Michael Bloomberg.

When he was the mayor of New York City, he forced every kid in the city to have a flu shot to attend school or daycare. He also instituted a ban on more than 16 ounces of sugary beverages – a ban.

But this nannying isn’t even the worst thing about Bloomberg. Not by a long shot. (Pun intended.)

His record on firearms should strike fear in the hearts of all gun-toting Americans. He has donated tens of millions of dollars to anti-gun campaigns.

Bloomberg previously pledged to spend $100 million of his own money to win the presidency.

That money buys a lot of anti-gun airtime. If Bloomberg jumps in, expect yet another candidate to call for confiscating the more than 16 million lawfully-owned modern sporting rifles in America today. Magazine bans will be at the forefront. Gun rationing would be real. Biden’s clueless ideas of so-called “smart gun” technology requirement for guns would be adopted and Andrew Yang’s gun licensing scheme to exercise basic America rights wouldn’t be so implausible. (source)

If Bloomberg follows through and runs this time, we could be looking at a battle between two New York City billionaires should he win the nomination and take on Trump.

In a very weak field of candidates, this could be Bloomberg’s chance to be not only the nanny of NYC but the nanny of the United States of America.