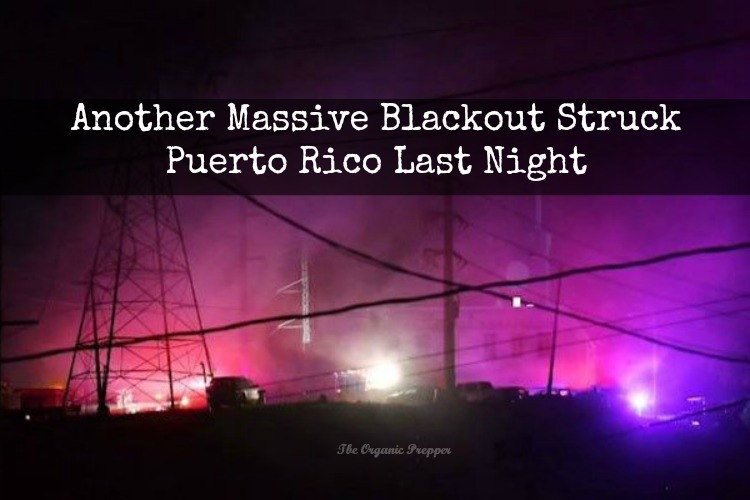 Last night, an explosion at a San Juan power plant regressed Puerto Rico’s efforts to restore power to the island five months after Hurricane Maria struck a massive blow. Much of Northern Puerto Rico has suffered another blackout, including the capital city.

The island’s Electric Power Authority said several municipalities were without power, including parts of the capital, San Juan, but they were optimistic it could be restored within a day as they worked to repair a substation that controls voltage…

…It was not immediately known what caused Sunday’s fire, which was quickly extinguished. Officials said the explosion knocked two other substations offline and caused a total loss of 400 megawatts worth of generation. (source)

But according to at least one Puerto Rican, we aren’t getting the whole story from the media about these outages. A reader named Jennifer from Manati told me:

What the news ain’t saying is that we actually had three power grids down. The first one was the Cambalache power station in Arecibo. This left the whole north area without power.

Then Palo Second station went down. This second power station connects power from the north to the capital.

Afterwards, we had an explosion in Monacillos. This one effected mayor hospitals, airport and capital.
For some reason the government and news want people to believe that everything is well and running that things are almost back to normal when that ain’t the truth. All you have to do is visit cities outside from the metropolitan area to see the reality we are living.

And even worse, before this explosion, more than a million people were still without power from the Category 4 hurricane that struck the island on Sept. 20, 2017. They’ve been thrown back in time by a hundred years, with no power, no running water, and damaged homes.

This is a prime example of how disasters aren’t just one-time occurrences. They’re very often followed by subsequent disasters.

Think about it. Fires are often followed by floods which are followed by mudslides and sinkholes. (See California for reference.)  The tsunami in Japan was followed by a nuclear plant disaster. Hurricane Harvey in Texas had storm surges and floods that caused a chemical plant to explode a few days later. Now, this already-stressed infrastructure has crumbled again under it’s increasing demand.

Power has been restored to a few critical locations.

This is one situation in which living in a more populated area can benefit you. After last night’s explosion, workers were quick to restore power to specific locations.

By late Sunday, electricity workers had been able to restore power to key locations, including the Luis Muñoz Marín International Airport in Carolina, as well as the Medical Center. (source)

As well, after Hurricane Maria, the first areas to resume some form of normalcy were the ones with higher population. San Juan saw it’s power restored immediately but people in more remote areas are still waiting. And not just a few people.

Vox estimated that 1.36 million Americans are still without electricity. You’ll see other numbers that say 400,000, but that is counting households, not individuals.

The US Army Corps of Engineers… estimated that Puerto Rico would need 50,000 utility poles and 6,500 miles of cable to restore its power system…

…When an electrical circuit is open or broken, the power doesn’t flow, whether that’s a flashlight or a phone.

It’s a simple concept, but when it happens in the electricity grid — what engineers say is the largest, most complex machine ever built — it quickly becomes a byzantine problem.

With thousands of miles of transmission lines, gigawatts of generation, computers that route power, frequency regulators, and transformers that all serve the constantly fluctuating needs of millions of people, lots of things can go wrong. Generators can shut down. Transformers can explode. Power demand and supply can fall out of balance.

By far the most common cause of blackouts is damage to power lines, which are the most vulnerable part of the electrical grid to storms.

“In a disruption like this, it’s transmission and distribution,” Marsters said. “Damage does occur to generation assets, but those are point specific and you can get those back online in a reasonable time.”

…Puerto Ricans are now desperately trying to connect the main power arteries to individual homes, and some have resorted to their own makeshift repairs, mounting their own utility poles and stringing up low-voltage transmission lines. (source)

But even before Hurricane Maria made landfall, things with the infrastructure were dire.

Even before the hurricane devastated the island, the infrastructure was in terrible shape, a fact underlined by last night’s explosion.

The blast illustrated the challenges of restoring a power grid that was already crumbling before it was devastated by the Category 4 hurricane.

In many cases, power workers are repairing equipment that should have long been replaced but remained online due to the power authority’s yearslong financial crisis. PREPA is worth roughly $4 billion, carries $9 billion in debt and has long been criticized for political patronage and inefficiency. It also struggled with frequent blackouts, including an island-wide outage in September 2016.  (source)

Before Maria made landfall, I wrote an article that predicted a long haul to get power restored.

It’s entirely possible that Hurricane Maria will put the island in the dark for quite some time to come, completely changing their way of life. 70,000 people are still without power from their bout with Irma, and much more damage to the utility system is expected. Gov. Rossello said:

“We will not have sustainable electric infrastructure in the near future. We will be bringing in crews from outside of Puerto Rico to attend to these measures.”(source)

Prepa Executive Director Ricardo Ramos Rodríguez recently said the powerlines carrying electricity in the public corporation’s system are in such a deteriorated state that a strong storm could leave the island without power for weeks.

“To give you a number, if during Hurricane Georges 100 lines went down in 1998, today the same [kind of ] hurricane would bring down 1,000,” the official candidly told Caribbean Business when asked about the possibility of Prepa’s system effectively withstanding the onslaught of a similar storm.

“The lifespan of most of Prepa’s equipment has expired. There is a risk that in light of this dismal infrastructure situation, a large atmospheric event hitting Puerto Rico could wreak havoc because we are talking about a very vulnerable and fragile system at the moment,” Ramos added…

…Francisco Guerrero (a fictitious name to protect his identity), a Prepa field worker for 23 years, said it would take months for Prepa to bring up Puerto Rico’s power system should a hurricane like Harvey strike the island.

The lack of linemen and other technical personnel, as well as a lack of equipment—including replacement utility poles for powerlines and replacement parts—are the issues of greatest concern among public corporation employees, who say they risk their lives working with equipment in poor condition that provides them with little safety.

Guerrero said that today only 580 linemen remain out of the 1,300 who were part of the workforce in previous years—and that’s not counting the upcoming retirement of another 90 linemen. Likewise, he said there are only 300 electrical line testers to serve the entire island.

The source also said that much of Prepa’s equipment dates back to the 1950s—and the more “modern” equipment that is still functional dates from the 1990s; in other words, it’s from the past century.

“If a hurricane like this one [Harvey] hits us, the system is not going to come online, I’d say, in over six months. Right now, the warehouses don’t even have materials. I’m talking about utility poles and other stuff,” Guerrero explained.

“How can you say that you have equipment that dates back to the 1950s and you are not buying parts to repair them? When it’s time for maintenance work, you don’t have the part and you leave things as they are, but there is an entry in the log saying maintenance was done. And yes, it was done, but the most important thing was not done, which was to replace that part,” he added.

Although he did not assign the debacle to former Prepa Chief Restructuring Officer Lisa Donahue’s order to stop buying supplies as the main cause for the lack of materials, he is certain the order was “the straw that broke the camel’s back.” (source)

Many people thought it was a ridiculous premise and that power would be up and running within a couple of weeks. But it turns out, that was cognitive dissonance. This situation is all the proof you need to see that things can change overnight.

Go watch this video to see what everyday life is like in Puerto Rico for nearly half a million people.

Do you think things will ever be the same in Puerto Rico?

Have the residents of the island been permanently thrown back into Third World status? Will the power ever be fully restored? And considering they’re Americans too, isn’t it rather embarrassing that we aren’t doing more to aid in the recovery?