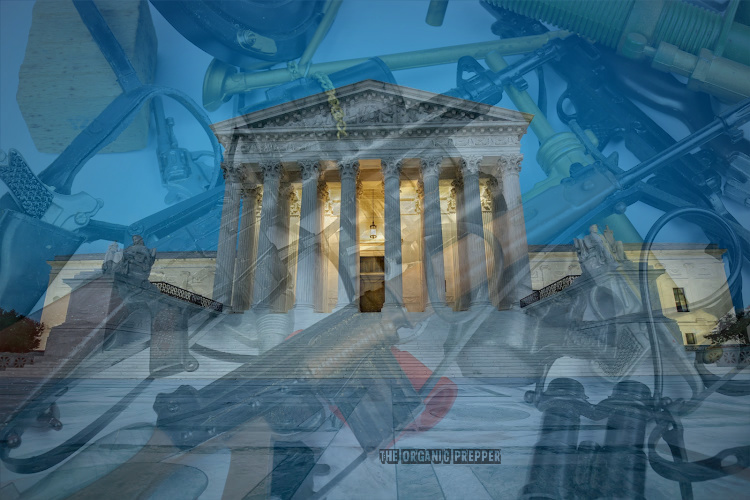 Back in late February, I wrote an article entitled “SCOTUS Case May Determine If Police Can Enter Your Home Without A Warrant,” where I discussed a Supreme Court case, Lange Vs. California. In that case, Justices are going to have to decide what essentially amounts to national guidance regarding when police in pursuit of a suspect can enter that person’s home without a warrant.

However, another case has arisen, pointing toward the clear fact that there is a war on what is left of the Fourth Amendment. But this new case also has drastic implications for the Second Amendment.

This case, based out of Rhode Island is Canigilia vs Strom and it could have wide-ranging consequences for policing, mental health, gun rights, and due process. Unsurprisingly, the Biden administration and Attorney’s General from nine states are asking the Supreme Court to uphold warrantless gun confiscation.

Here’s the original story of this case.

The case actually goes back to 2015, when 68-year old Edward Caniglia made a joke to his wife Kim that he didn’t use a specific coffee mug after his brother-in-law had used it because he “might catch a case of dishonesty.” That comment spiraled into an hour-long argument and, finally, exhausted from fighting with his wife of 22 years, he retrieved a gun from his bedroom and put it on the kitchen table. He asked his wife, “Why don’t you just shoot me and get me out of my misery?”

Naturally, the argument continued. So Edward took a drive to cool off but, when he returned, it picked back up. Kim then left the house and spent the night at a hotel. She called home the next day and got no answer. Worried, she called the Cranston, RI police asked them to perform a “wellness check” on her husband and escort her home. When the cops arrived they spoke to Edward on the back deck. The police admit he “seemed normal” and “was calm for the most part,” and even said, “he would never commit suicide.”

As Forbes reports, however, none of the officers had asked Edward any questions about the factors relating to his risk of suicide, risk of violence, or prior misuse of firearms. (Edward had no criminal record and no history of violence or self-harm.) In fact, one of the officers later admitted he “did not consult any specific psychological or psychiatric criteria” or medical professionals for his decisions that day.

Police, however, insisted that he go to a local hospital for a psychiatric evaluation. Edward rightly refused but, only agreed to go after police lied to him and agreed that they wouldn’t seize his guns while he was gone. The police then told Kim that her husband had agreed to the seizure and, under the impression that Edward had agreed, she led them to his guns.

Edward was immediately discharged from the hospital and the police only returned his firearms after Edward filed a civil rights lawsuit against them.

They claimed it was a “narrow exception to the 4th Amendment.”

Police did not claim that it was an emergency seizure or that the seizure was conducted to prevent imminent danger. They argued that their actions were a form of “community caretaking” another “narrow exception to the Fourth Amendment,” the type of which are increasing every day.

“Community Caretaking” was created by the Supreme Court nearly 50 years ago for cases involving impounded cars and highway safety on the grounds that cops are often needed to remove nuisances like inoperable vehicles on public roads.

Not surprisingly, the authoritarian lower courts sided with law enforcement.

In their opening brief for the Supreme Court, attorneys for Caniglia warned that “extending the community caretaking exception to homes would be anathema to the Fourth Amendment” because it “would grant police a blank check to intrude upon the home.”

That fear is not unwarranted. In jurisdictions that have extended the community caretaking exception to homes, “everything from loud music to leaky pipes have been used to justify warrantless invasion of the home,” a joint amicus brief by the ACLU, the Cato Institute, and the American Conservative Union revealed.

“The Fourth Amendment protects our right to be secure in our property, which means the right to be free from fear that the police will enter your house without warning or authorization,” said Institute for Justice Attorney Joshua Windham. “A rule that allows police to burst into your home without a warrant whenever they feel they are acting as ‘community caretakers’ is a threat to everyone’s security.”

But while the question of this case surrounds whether or not the actions of the officers were “reasonable,” it is perhaps worth noting what the supreme law of the land has to say about the question.

The right of the people to be secure in their persons, houses, papers, and effects, against unreasonable searches and seizures, shall not be violated, and no Warrants shall issue, but upon probable cause, supported by Oath or affirmation, and particularly describing the place to be searched, and the persons or things to be seized. – 4th Amendment to the US Constitution

The shooting in Colorado adds more fuel to the gun control fire.

Right on queue, American media has hopped into overdrive promoting fear and terror over “mass shootings,” with eerily similar headlines from state to state. The recent tragedy in Colorado where ten people were killed by a mass shooter now has the “something must be doners” in an uproar predictably calling for assault weapons bans, gun control, and all other methods of destroying the Second Amendment at the Federal and State level. The shooting in Colorado, like every other mass shooting, is being used to maximum propaganda effect to demonize guns, gun owners, and the ability of Americans to defend themselves from the criminal roaming their neighborhoods as well as those roaming their public institutions.

If Americans aren’t careful, the cases heading to court right now are going to be decided against their inalienable rights, all codified and providing more and more justification for an already out-of-control police state to run amok.