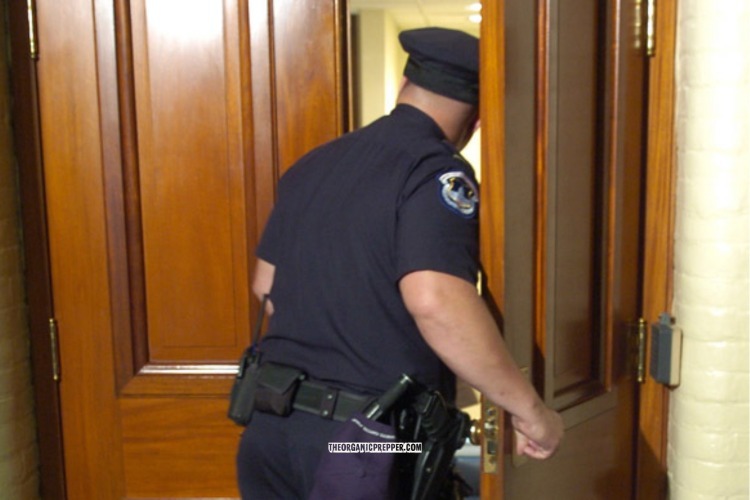 A new Supreme Court case may determine if police have the power to enter a person’s home without a warrant. Years of American law precedent and the US Constitution are quite clear in the restraints put on government agents. However, that isn’t stopping the police, government, and activist judges from doing what they can to continue to chip away at those basic protections.

We know the First Amendment and Second Amendment are under attack. Now the Fourth Amendment is taking another volley.

Turn down the volume, folks, or you may have to face the Supreme Court

Lange vs. California is a case that centers around a traffic stop in California. California Highway Patrol followed Arthur Lange, and only a few seconds elapsed between when the officer turned on his blue lights and when Lange made the turn into his driveway, then his garage.

Lange’s crime? Playing his radio too loud and occasionally beeping his horn. After the officer entered Lange’s garage, he began to suspect Lange had been drinking. Now the case is before the Supreme Court of the United States.

It might not seem like much, but this case could have far-reaching repercussions for the Fourth Amendment and Constitutionally protected rights. How?

The Justices are tasked with essentially what amounts to national guidance regarding when police in pursuit of a suspect can enter someone’s home without a warrant.

The US Constitution requires a warrant, unless…

The right of the people to be secure in their persons, houses, papers, and effects, against unreasonable searches and seizures, shall not be violated, and no warrants shall issue, but upon probable cause, supported by oath or affirmation, and particularly describing the place to be searched, and the persons or things to be seized.

Some courts have said the 4th amendment does not apply if the person consents or if the officer faces “exigent circumstances” that require immediate action. One of those “exigent circumstances,” according to the Supreme Court, is when an officer is in “hot pursuit of a fleeing felon” who is attempting to evade the police.

Note: The Constitution does NOT allow for no-warrant entry in the case of chasing a felon (that’s an overreach by the courts).

Besides, in this case, Lange wasn’t even suspected of a felony

Lange had three times the legal limit of alcohol in his blood, according to court documents. He lost his license and pleaded no contest to DUI. However, he appealed that what Officer Weikert learned in the garage should not have been allowed into evidence. Of course, a California court sided with police and said there was no difference between pursuing someone suspected of a felony and someone suspected of a misdemeanor.

But Jeffrey L. Fisher, Stanford University law professor representing Lange, said that extending this “hot pursuit” exception to include misdemeanors would increase the power of police to enter someone’s home or property, which, he says, the Constitution holds “sacrosanct.” He is right.

The Constitution requires a warrant.

Fisher agreed with Justice Stephen G. Breyer when Breyer admitted how difficult it could be because of different state laws to classify behavior as a felony or misdemeanor. But, Fisher argued, the court didn’t need to come up with a hard rule.

He argued that the court should instead make these kinds of decisions on a case-by-case basis. He said officers deserve “substantial discretion to analyze the situation, as the courts have always said, but do require a showing of actual exigent circumstances.”

But on the US Supreme Court, Justice Samuel A. Alito Jr. said that a video of the encounter made him doubt that Lange even knew he was being pursued. The officer only turned his lights on 100 feet from Lange’s driveway.

Alito asked an important question, “If we hold that ‘hot pursuit’ requires a hot pursuit, won’t we go a long way toward preventing warrantless arrests for minor infractions?”

Justice John G. Roberts lamented about hamstringing the police. He worried that an officer could be put in danger when a suspect retreats to his home, where he could destroy evidence or arm himself. He argued that maybe the police should be even more worried when a suspect flees over a minor infraction.

“It seems to me that that’s the situation where you’d be most concerned,” the chief justice explained. “I mean, he’s got something to hide.” Roberts, of course, was unable to cite the clause in the Constitution that stated, “Officer safety is paramount.”

Interestingly enough, California seems to believe that its courts were wrong and is declining to defend the courts. State Deputy Solicitor General Samuel T. Harbourt said the state believes that the hot pursuit leeway should be applied on a case-by-case basis when misdemeanors are involved.

Debating over whether police can enter homes without a warrant over misdemeanors or felonies is missing the point. There are situations where this might be applicable, such as a violent crime being committed inside a home or domestic violence. However, the US Constitution is clear that police cannot suspect a person of drunk driving or any other illegal activity and subsequently enter their homes without a warrant.

At a time with the US Congress seems determined to earmark approximately half the population of the country as domestic terrorists, we need every ounce of constitutional protection we can get.

Do you hear that?

What we are witnessing is the legal chipping away at two hundred years worth of protected rights. However, instead of gunshots, it is the click of fingers on a keyboard and the latches of lawyers’ briefcases snapping shut.

What are your thoughts on the case in front of the Supreme Court? Do you feel the police officer was justified in entering the man’s home? Let’s talk about it in the comments.