The Amazing Benefits of Green Space in the City 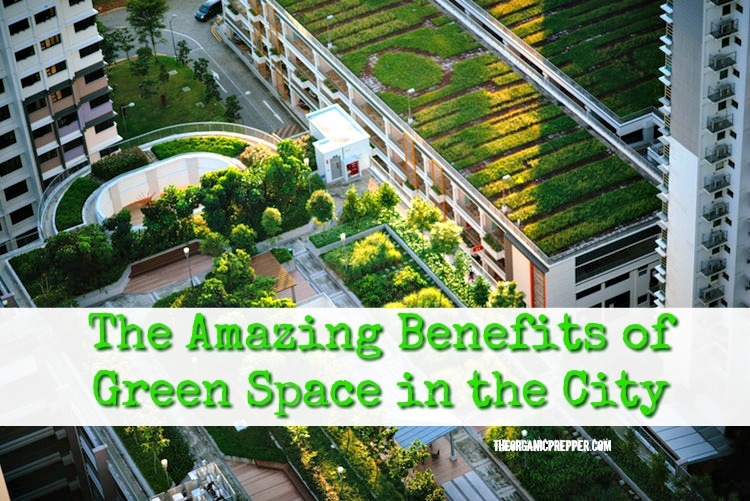 Green space, greening, and greenery are all current buzzwords in the research world today.

All that means is simply one aspect of nature and one aspect of enjoying nature. If you can see green in the form of trees, forestry, meadows or grass, shrubbery or vegetation, you are in a green space. Green space could include trees outside, being outside or surrounding yourself with greenery such as having fauna indoors. Maybe you have a porch, greenhouse, or solarium where you can hang out and read next to some calming plants.

Green space is more than just parks, however. It’s greenery that is set apart for recreational or aesthetic qualities in an otherwise urban space. We are going to talk about some of the pros of having more greenery and also the health benefits. The push for green space can also have a menacing side, believe it or not.

Studies on green space are also another example of how research follows the trends – not the other way around.

After all, there’s probably not a lot of greening going on in the lab or research center. And it is rather obvious that humans lean more towards being outdoors when they are boxed in an artificially lit cubicle without windows all day. Think about all the children who get called “ADHD” when they stare dreamily out the windows. Perhaps it is just natural to yearn for nature. What child wouldn’t gravitate toward the outdoors when even adults cannot sustain eight hours of intense focus each day?

As people become more depressed in a world inundated with wires, screens, long, sedentary work hours and mental stress, people are attempting to unplug and reconnect to something majestic – to nature. There is always beauty, meditation, and reflection to be found there. There is Truth in Nature. There is Calm. As we learn lessons by basking in paradise, we also learn about ourselves and reconnect with our souls.

All of this explains why some people feel overwhelmed, anxious, and uncomfortable when they have to make a trip into the city and spend some time there. If they’re accustomed to constant access to green space because they live more rurally, the difference can be jarring.

Talk to an elderly person today. What do they like to bring up in the conversation? Old TV shows? Nah…

They tell you about life on the farm or playing outside by the creek. They get a far-off dreamy look in their eyes when they talk about picking berries – and eating them right there in the berry patch. They may even wince when they come back to the present time and think about how much a half pint of raspberries costs in the grocery store today. They may have been onto something since our environment can shape who are as people, according to neuroscience.

How do people reconnect with nature?

Some of the ways people are achieving a reconnection to nature are through “forest bathing,” or grounding, aka “earthing.”

Forest bathing is simply basking in some kind of forest setting. It’s a very calming, strengthening activity in a world full of so much uncertainty. It’s a great way to re-center yourself.

Earthing – or grounding – is when you recenter yourself by standing on the ground with your bare feet. People who do this claim that earthing improves their health, emotions, and sense of clarity. People also claim that the health problems associated with EMF overload are mitigated by grounding. The body is electric, after all.

Green space, however, includes parks, botanical gardens, edible landscapes, and even cemeteries. A “living wall” is when business owners grow some greenery on something that would normally be an eyesore – like on scaffolding in front of a building. This type of growth also mutes construction noise.

It even includes the strips of grass between sidewalks and buildings, but that’s not necessarily beneficial.

Is Green Space One of Those Agenda 21 Sustainability Things?

It certainly looks that way. Agenda 21 and Agenda 2030 are UN “sustainability” programs that push people out of rural land and into the cities. So yes, greening up urban areas serves a sustainability agenda and attempts to justify keeping some land off-limits to development or human use. “Urban greening” could be a buzz term that eked out of a push for Agenda 21. “Green” can certainly be a loaded term.

While sprawling “urbanization” is usually frowned upon by hardcore environmentalists, green space can serve as an incentive to keep people in mega-cities which could later be “smart cities.”

One of the reasons it can be championed so much by the EPA, UN, environmentalists, and corporations who use “greenwashing” to earn brownie points (greenie points?) is because there is a golden nugget of truth to the aesthetics and health claims.

Think about it – it’s a lot easier to keep people in their daily grind if they aren’t too terribly depressed and hopeless. Then again, why are cities so bleak to begin with….

But whereas Agenda 21 minions want cookie-cutter manicured lawns and no individual rights – a more beneficial type of greenery would be hanging gardens, lush parks, and wooded areas, edible landscapes, fruit-grafted urban trees, aesthetic vines and plants, living walls, vertical garden towers – you name it. As long as people can enjoy it.

And that’s the vision I want you to hold when you read about the benefits of green space:

A study from the Barcelona Institute for Global Health (ISGlobal) looked at two groups of children ages 4-5 and 7 years of age. Children who had more greenery around their homes scored better in two types of attention performance tests.

“A previous ISGlobal study already indicated that green spaces within and surrounding schools could enhance cognitive development in children between 7 and 10 years of age.” (ScienceDaily)

Living close to green space is much more motivating to walk, run or play. Closer proximity is linked to greater physical health and a reduction of 15 out of 24 disease clusters, based on a Journal of Epidemiology and Community Health study of over 345,000 people who lived within a one-kilometer radius.

That same Journal of Epidemiology study found that the people who lived within one kilometer of green space notably had lower rates of depression and anxiety than those living in a “concrete jungle.”

“The annual prevalence of anxiety disorders among those living in a residential area containing 10 percent of green space within a 1-kilometer radius of their home was 26 per 1000, and for those living in an area containing 90 percent of green space, it was 18 per 1000. Similarly, the figures for depression were, respectively, 32 and 24 per 1000 of the population.” (PsychCentral)

Furthermore, another study found that “greening” a city by cleaning up garbage, fixing things up and planting seeds, depression among over 300 participants “decreased by 41.5% and self-reported poor mental health showed a reduction of 62.8% for those living near greened vacant lots compared with control participants.” (Study)

Getting out to the green can boost morale.

A recent study found that children who live near greenery have fewer respiratory issues like asthma, wheezing, and breathing trouble later on in life.

“Urbanization and the resulting shrinkage of green spaces in cities can be considered a boon for mosquitoes that transmit diseases, such as Aedes aegypti (dengue) and Culex quinquefasciatus (lymphatic filariasis).

More adapted to urban areas, they benefit from the decline in populations of other mosquito species,” says one Brazilian study.

Our country puts a weird emphasis on watering grassy lawns. But in other countries trees are what give them clean water.

A study in Nature Communications of 300,000 children in 35 nations says children whose water sources have greater tree cover are less likely to experience diarrheal disease, which is the second leading cause of death for children under the age of five.

In addition to the above benefits of a green space, here are a few more:

It’s not easy being green

Some complaints about green space are the upkeep and use of water, creating longer walking distances and too many over-manicured grass patches that may use chemicals.

Of course, you can mindfully create a green space that provides food with fruit-bearing plants, is pleasing to the eye with native flora, and purely organic. If you have no room for growing food, you can grow flowers that support pollinators. Anything green is good for the earth and for the humans that get to experience it.

All in all, as long as people can keep their rights, continue with progress, and have access to nature in some form, I’d take paradise over the paved parking lot any day of the week.

Why not have both? 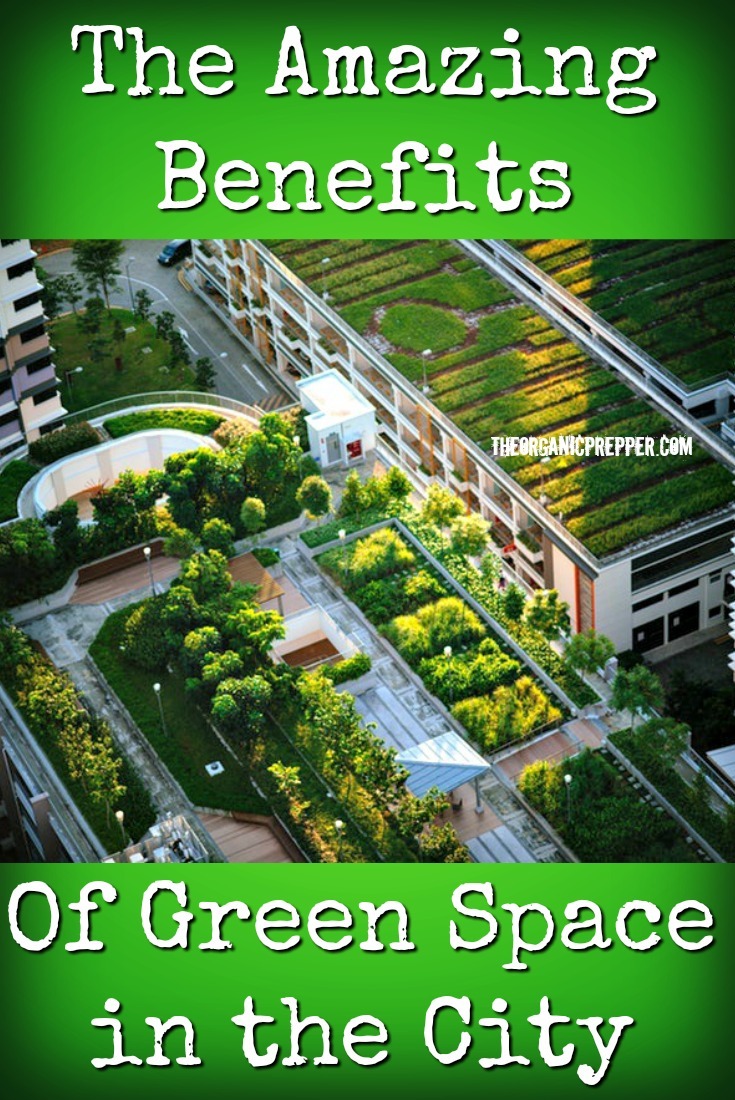