Argentina Is Suddenly on the Verge of ANOTHER Economic Collapse 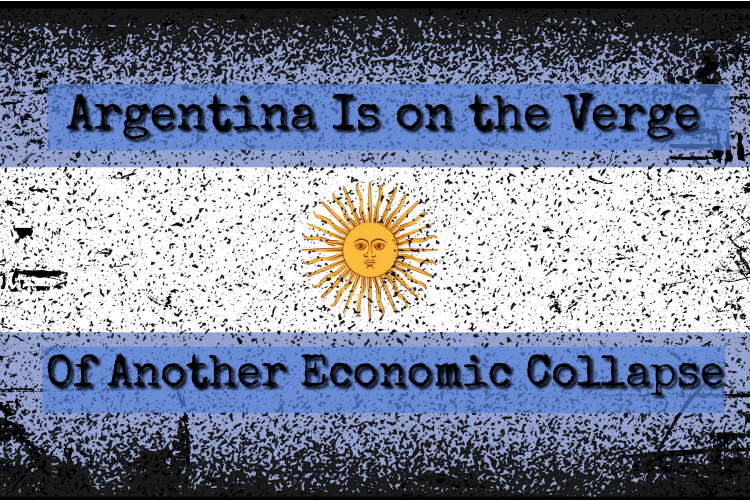 The economic collapse of Argentina in 2001 is the stuff of prepper legends. For years, it was the example that we pointed to when trying to convince others that, yes, it really can happen. (Now, of course, that example has been replaced by the dramatic fall of Venezuela.) There’s even a fantastic book about the Argentinian collapse with survival lessons that has fueled many a prepper to get stocked up, in which Fernando Aguirre, also known as FerFal, shared the inside story.

And now, sadly, it looks like just as hopeful Argentinians believed the country was getting back on its feet, another collapse could be imminent.

President Mauricio Macri, a business tycoon who vowed to reincorporate Argentina into the global economy, has asked the International Monetary Fund (IMF) for a hefty credit line of at least $19.7 billion to see the country through the rest of his term, which ends in 2019.

When the IMF gets involved, it tends to be the beginning of the end, as we saw in Greece, whose crisis was at its peak between 2009 and 2016.

What happened during the previous Argentinian collapse

Back in the late 1990s, Argentina was suffering. Wages were decreasing, unemployment was increasing, and the government was getting deeper and deeper into debt. This all came to a head in 2001 when the Argentinian government defaulted on a whopping 100 billion dollars of that debt.

Overnight, interest rates skyrocketed and there was a run on the banks. The government froze all the accounts and allowed patrons a small trickle of money only once per week. The banks converted all dollar accounts into pesos at the previous exchange rate (pre-default) and suddenly everyone with a deposit account lost 3/4s of their wealth, just like that.

This, of course, resulted in social unrest, riots, and rage against the government and the banking system. What followed was several years of extreme poverty and desperation for the Argentinian people.

And now, Argentinians are seeing something that looks a whole lot like the beginnings of The Collapse 2.0. Macri’s announcement that he is asking the IMF for money was met immediately with skyrocketing interest rates and a currency that is rapidly losing its value.

The unexpected move surprised investors and stoked Argentines’ fears of a repeat of the nation’s devastating 2001-2002 economic collapse. Many here blame IMF-imposed austerity measures for worsening that crisis, which impoverished millions and turned Argentina into a global pariah after the government defaulted on a record $100 billion in debt.

Word of a potential bailout sent thousands of angry Argentines into the streets this month, some with signs declaring “enough of the IMF.” (source)

It’s even more shocking because up until just a few months ago, it seemed like the country was rebounding under the guidance of President Macri.

He settled with the nation’s remaining creditors and vowed to unwind big-spending policies of his populist predecessor, Cristina Fernandez. The economy grew and unemployment fell. In a show of swagger, Argentina last year issued $2.75 billion of dollar-denominated bonds with a 100-year maturity; investors snapped them up.

But now the hopeful citizens of Argentina are watching what looks a lot like a replay of the earlier collapse. Businesses are planning layoffs and reverting to survival mode. People are no longer making deposits and are withdrawing the money from their dollar accounts in order to avoid having them frozen and devalued again. The price of everything is skyrocketing. The peso has lost 25% of its value.

Rising U.S. interest rates did not help. Argentina is saddled with more than $320 billion in external debt, equivalent to 57.1 percent of GDP, much of it denominated in dollars. Jittery investors hit the exits. The peso swooned. The central bank sold $10 billion in reserves trying to prop up the peso, forcing Macri to seek assistance from the IMF.

Marcos Pena, Macri’s cabinet chief, said this week that changing the inflation targets “may have damaged the perception of an autonomous central bank.”

…The central bank has hiked its benchmark rate to 40 percent, the highest in the world. Even so, inflation is still running at an annual rate of around 25 percent. (source)

It’s like deja vu and there’s nothing the people can do except prep while they can (if they can) and watch the dominoes fall again in a horrifying repeat of the last collapse.

All over the world, economies are shaky

Since 2000, those who are paying attention have watched one horrific collapse after another. We’ve seen banks seize assets and devalue holdings. We’ve watched people starve as money is devalued. We’ve seen hospitals unable to provide care and people working at jobs that won’t even buy a bag of rice at the end of the week.

Right now, we are watching countries, including our own, overextend spending and run in deficit. Eventually, it’s all going to come tumbling down. Things here in the US are becoming more desperate every month. You need only watch the collapses of these other countries to see how this story ends.

Ask yourself these questions:

And if you can’t say yes to these questions, what are you waiting for?

The people in Argentina right now are discovering that their money is buying less and the products are costing more. Soon, it will be a matter of availability. It’s really too late to prep when you reach this point. All you can do is hope to hang on.