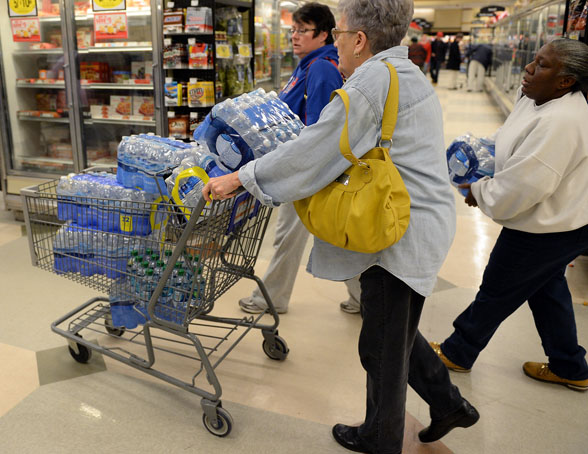 Here is a reason to store water that even non-preppers will find pertinent:  more than half a million people in West Virginia are unable to use their tap water for drinking, cooking, bathing or cleaning due to a chemical spill near a water treatment plant. Chris Carrington of The Daily Sheeple reported:

Up to 300,000 people in West Virginia have been banned from using tap water after a chemical spill in a river, which has also forced schools, bars and restaurants to close.

The state’s governor has declared a state of emergency in nine counties following the industrial leak. The ban has lead to long lines for bottled water and locals are reporting that stores are running dry, and people are fighting over the bottles that are available.

Residents in a growing number of affected areas have been told not to drink, wash or cook with the tap water and only use it for flushing toilets.

Laura Jordan, external affairs manager for West Virginia American Water, said: “It could be potentially harmful if swallowed and could potentially cause skin and eye irritation.”

The spill of 4-Methylcyclohexane Methanol, a chemical used in the coal industry, into the Elk River happened above a water treatment plant in Charleston – the largest in West Virginia – and affects 100,000 homes and businesses. (source)

The spill is said to have originated from Freedom Industries, which produces “freeze conditioning agents, dust control palliatives, flotation reagents [and] water treatment polymers,” among other chemicals, according to the company website.

The MSDS (Material Safety Data Sheet) on 4-Methylcyclohexane Methanol contains alarming warnings about the chemical that has seeped into the water supply, among them, the following:

Move out of dangerous area. Show this material safety data sheet to the doctor in attendance. Symptoms of poisoning may only appear several hours later. Do not leave the victim unattended.

If inhaled : Move to fresh air. If unconscious place in recovery position and seek medical advice. If symptoms persist, call a physician.

In case of skin contact : If skin irritation persists, call a physician. If on skin, rinse well with water. If on clothes, remove clothes.

If swallowed : Keep respiratory tract clear. Do NOT induce vomiting. Do not give milk or alcoholic beverages. Never give anything by mouth to an unconscious person. Take victim immediately to hospital. (source)

Those who haven’t stored water for drinking and hygiene purposes are now at the stores, scrapping it out over a few limited jugs of water. Water has quickly run out. No one knows how long the disaster will affect municipal water supplies, and unprepared residents are now at the mercy of FEMA. Many businesses are closed due to the crisis.

House of Delegates spokeswoman Stacey Ruckle said the House wouldn’t conduct any business today, and would reconvene at 1 p.m. Monday.

Staff members at Thomas Memorial and Saint Francis hospitals were told not to use water except for flushing the toilets, spokeswoman Paige Johnson said Thursday.

The hospitals have some bottled water on hand and they’re getting more, Johnson said.

She didn’t know of any patients coming to the hospital complaining of problems associated with drinking the contaminated water.

CAMC has canceled all procedures for today, officials said.

“We keep a three-day emergency supply, so we should be fine,” Toney said. “We’re planning for more but we’ve got enough to last until we can get more water in here.”

At the Charleston Town Center Mall, marketing director Lisa Mc Cracken said Thursday evening, “We’ve closed our restaurants and we closed our treateries. We’ve turned off all the public restroom faucets, and we have issued an advisory mall-wide to the tenants, telling them not to use the faucets in their establishments.”

Crystal Del Giudice, a supervisor at the Starbucks coffee shop in the mall, said employees ran out to buy hand sanitizer so they could clean themselves up after they closed the store.

Several mall restaurants had signs posted, informing customers that they were closed because of the water emergency.

At the Kroger in Kanawha City, shelves in the bottled-water aisle were nearly bare. A Charleston police officer kept an eye on the crowd.

Kerstin Halstead of Campbells Creek was doing her regular shopping when her husband called and told her to buy water.

“People have been grabbing it like crazy,” she said as she loaded two cases of bottled water into her SUV, “and some people were getting — well, they could have shared more.”

The East End Rite-Aid ran out of water just after 6:30 p.m., according to a store employee. Customers were buying ice instead.

Ruby Piscopo, 28, of Charleston, and Christi Pritt, 29, of Belle, were having an after-work drink when they heard about the chemical leak. “We started getting texts and changed the TV to the news,” Piscopo said. “I wasn’t concerned until someone said it could go on for days.”

The two bought $30 worth of water between them. They had other friends buying water throughout the city, with the intention of splitting it up later. (source)

Many people worry about the unstable electrical grid, and the effects that this would have on life as we know it.  However, what will cause death and illness even faster is a threat to the water supply. If you do not have a well, a nearby spring or fresh water source, and ways to filter the water, you could be in big trouble – life-threatening trouble – in a matter of days.

Our municipal water supply is a threat even without the chemical spills. 18 unregulated chemicals have been found in supplies across the country, and deliberately added chemicals can cause serious long-term health concerns.

If you don’t have at least a one-month supply of fresh pure drinking water properly stored, along with plans for long-term water sources, let this industrial accident be a wake-up call.  An epic disaster doesn’t have to be a dramatic, end-of-the-world scenario.  This should serve as a cautionary tale to those who are blithely unprepared.

If you don’t want to be at the tender mercies of FEMA and the government for your survival, get prepared. A full month’s supply of drinking water for a family of 4 is approximately $150, give or take a little, depending on the prices in your area. As well, fill empty containers with tap water that can be safely used for pets, for flushing, and for cleaning and hygiene purposes. This is a small investment to make for your family’s security and well-being in the event of an emergency. You don’t want to be one of the people standing in line for whatever the government chooses to dole out to you.

Declare your independence by getting prepared for a water emergency. If you never buy a single canned good or bag of pasta for long term food storage, please store water. You don’t have to be a conspiracy theorist to see the good sense in being prepared for an event that could happen any place, at any time.

Thank you to David for alerting me to this event – our thoughts are with you!