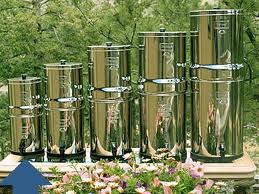 Officials in West Virginia claim that the water in parts of the state is now safe after a chemical spill left 300,000 people without water, but local residents aren’t so sure.  A reader graciously provided his eyewitness assessment and opinion of the situation:

I have first hand knowledge this water is not safe. For one, it smells very strongly of licorice. It has an off color; a blue hue. I will never drink it again.

I felt it was probably ok to bathe in but that was a mistake too. After flushing my system per the water companies specs, I took a shower. My eyes burned for 4 hours post shower. Many other posts on facebook and twitter have complained of the same ailment along with rashes.

The president of the water company didn’t answer the question when asked if he was drinking the water he was proclaiming safe for the masses and the head of the local head of the health dept. replied he was still in a red zone when asked the same question. Their non-answers speak volumes. Just thankful we rent so we don’t have a house to sell when we move.

I heard from a chemical engineer friend that the smell would not dissipate for many weeks. He likened it to getting gasoline on your hands and not being able to wash the smell off. We are not drinking nor using it for anything but flushing the toilet. They also have changed their tune and are now saying pregnant and nursing mothers should continue to utilize bottled water. If it’s unsafe for them, how is it safe for the rest?

Many people have asked whether or not a water filtration system will remove the toxic chemical, 4-Methylcyclohexane Methanol,  from municipal water, rendering it safe. It’s a difficult question to answer, because this chemical does not normally contaminate drinking water.

This is one of those situations where you can’t simply listen to “officials”.  You have to use common sense and make your own assessments.  You must keep in mind that toxins can sometimes stay in the body for a long time, and it’s difficult to know the repercussions that could occur in the future. Personally, I’d be hesitant to use this water at all, but if I had no option, I would absolutely be sure to filter it with my Berkey.  If I did opt to filter the water, I’d replace the filters promptly as well.

I can’t express enough how vital it is to use this as a cautionary tale. Not only should you have water stored for emergencies such as this, you should also have filtration systems and back-up sources of water in the event that a future situation continued for an extended period of time.