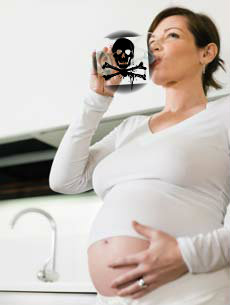 The mainstream media reports that things are starting to look a little brighter after a chemical spill in West Virginia resulted in a complete ban on tap water last week. Residents were urged not to use the water for drinking, cooking, or even for bathing because of an industrial accident that released toxic chemical 4-Methylcyclohexane Methanol into the municipal water supply.

Local authorities report that the water is now safe in some areas, partially lifting the ban, with the careful wording that the current levels of chemicals in the water are “believed to be safe”.  Local stores ran out of water very quickly after the spill occurred, and those without stored water were left to fight it out over the few remaining bottles within a day of the accident.

But is it really safe? Opinions seem divided.

“Based on the water sampling data that we have seen, we think that allowing the water to be used for drinking and cooking and all the other things is perfectly appropriate,” said Dr. Vikas Kapil, chief medical officer for the CDC’s National Center for Environmental Health.

The 1 part per million guideline, he told reporters Thursday, “is a level not likely to be associated with adverse health effects.”

But during situations like this, he admitted, there are often questions investigators can’t answer — at least not at first.

Scott Simonton, vice chairman of the West Virginia Environmental Quality Board, said he isn’t so sure the water is safe.

“I don’t think that just because it’s below that number, it’s magically safe,” said Simonton, a professor of environmental science at Marshall University. “We don’t know enough about the toxicity of this particular chemical to know what its long-term effects are and what the maximum contaminant level really should be.” (source)

Offering further evidence that ingesting this might not be a good idea, although officials say that the water is safe, they are warning pregnant women not to consume it.  The director of the CDC, Dr. Thomas Frieden , recommends caution. “Due to limited availability of data, and out of an abundance of caution, you may wish to consider an alternative drinking water source for pregnant women until the chemical is at non-detectable levels in the water distribution system.”

This, of course, begs the question: Is it really that safe if pregnant women shouldn’t drink it? What about toddlers and small children? What about those with a lowered immune response?

Local hospitals have reported a spike of people visiting the emergency room after the ban was lifted, most of whom were suffering from  what one hospital official called “scary-looking rashes” after having a shower in the sort of safe water.

The story doesn’t end here, because now, residents of other states could be in trouble.

The chemical, which is used in coal-processing, spilled into the Elk River. The Elk feeds into the Ohio River and a chemical plume that is 60 miles long  is making its way west. 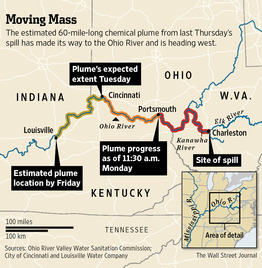 Unsurprisingly, the issue is being downplayed in the media:

The Ohio River Valley Water Sanitation Commission, a multistate agency based in Cincinnati that coordinates with states along the river to control, limit and monitor pollution, has been on high alert since the spill and is coordinating with state agencies and the U.S. Coast Guard to keep testing water quality, Mr. Schulte said.

Scientists at the Louisville Water Company do not think the chemical will be any kind of health risk when it reaches the area, sometime Friday morning, said company spokeswoman Kelley Dearing-Smith. (source)

Even without accidental spills, the municipal water supply contains many chemicals, some lurking by accident and some added deliberately. The lack of definitive statements of safety from authorities just underlines the fact that drinking what comes out of your faucet is sometimes akin to playing Russian roulette.

Laura Newton, The Water Filter Lady, generously passed on the following statement from Berkey headquarters  regarding water filtration in this particular situation: