An Open Letter to Those Smug, Discouraging Preppers 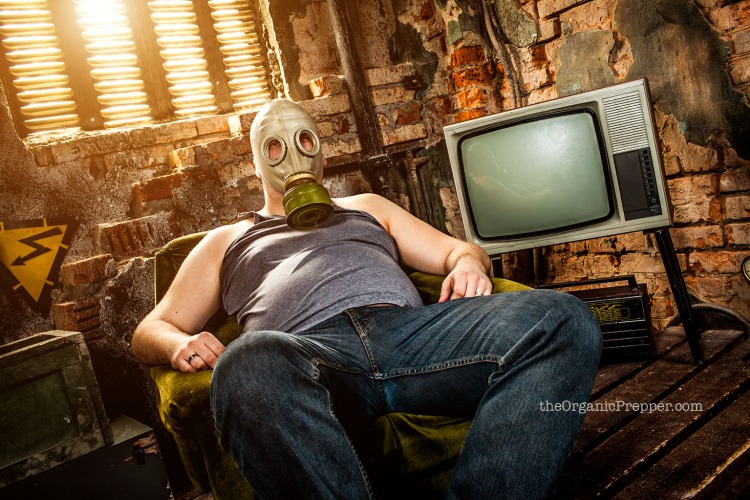 I really don’t understand why you don’t want to see new people on the path to preparedness. We aren’t supposed to be some kind of mean high school clique where only the cool kids who have always been a part of it can get in. But sometimes, it sure seems like it.

This open letter isn’t for the people who curiously ask about articles that are written with newbies in mind, but for the people who willfully discourage people dipping a toe in the water. You know who you are. And trust me, you aren’t going to like what I have to say to you.

Every time I write an article for beginners that is broken into small, palatable pieces, it never fails that I get a barrage of negative responses. You say things like:

If you aren’t prepped by now, there’s no use starting.

You’re talking to the Sheep.

It’s too late. You’re wasting your time. These people are going to die.

You aren’t telling the whole story. [Insert with sadistic glee terrifying details from the worst possible variation of the disaster]

And it goes on and on, dozens of comments berating and belittling the people who just realized that they want to do what is best for their families. The mockery, scorn, and smug derision of some of you in the prepping community is astonishing to me.

It enrages me. It sickens me. And it just makes no sense.

So let me get a few things off my chest here and counter some of your mean-spirited, ridiculous ideas. And just maybe, it will keep you from discouraging preppers who just happen to be new at this.

Unless a nuclear warhead has hit America or an EMP has detonated in the atmosphere above us or the market has given its last gasp, there is always time.

Sure, maybe someone starting to get prepped right now won’t be as prepared as those of us who have been at it for 5, 10, or 20 years but you know what?

They’ll be ahead of the people who are blissfully keeping up with the Kardashians. Cut them some slack.

I would rather see every person within 2 miles of me diligently working towards a greater state of preparedness than to witness them and their children starving or freezing after the second day of a power outage. I’d rather see them buy a good primer like The Prepper’s Blueprint and begin at square one, building on their preps diligently as they go through the book.

Why on earth would you tell people that there is nothing that they can do to help their families when clearly, there are a LOT of things that they can do, even on a very small budget?

#2) Overwhelming people with information is not helpful.

And another thing. Every article for beginners cannot contain every single bit of information they need to be prepared for any eventuality. I know that some people bring up points to be helpful, but others, you discouraging preppers  – and you know who you are – seem like they are deliberately trying to scare people away.

Every article for beginners cannot contain every single bit of information they need to be prepared for any eventuality. I know that some people bring up points to be helpful and that is very appreciated. But others – and you know who you are – seem like they are deliberately trying to scare people away.

You can’t hit people who are just starting out with ALL of the information about the Golden Hordes, the mainstream media lies, a nuke headed our way, the civilization-ending pandemic potential of 3 rare African diseases, and a total, permanent grid failure. It’s too much. It’s overwhelming.

You call it a “dose of reality” but what you really mean is, you’re taking pleasure in increasing someone else’s fear.

If someone feels like they have all of these things coming at them, how would they even begin to move from a lifestyle of grocery shopping a few days at a time to being prepared for something intense?

It’s just too much.

So this is why, from time to time, I write articles like yesterday’s Last Minute Shopping Guide to Panic Prepping. It’s why we put together a free Prepper’s Quick Start class at Preppers University.

Once someone learns how to handle a smaller emergency with aplomb – once they see that success – it will encourage them down the path to even greater preparedness.

#3) You probably aren’t as ready to survive every disaster as you think you are.

Let’s face it. No matter how many supplies we have, how long we’ve been at it, or how prepared we think we are, there is always something missing.

I learned this during the Ebola scare in 2014. I had well over a one-year supply of food. I had a nice little farm in California, growing vegetables and raising chickens. I had book after book about survival and had all sort of self-reliance skills.

But you know what I didn’t have?

And most of all, information. I didn’t know sweet diddly about a horrific illness that made you bleed from the eyes, nose, and ears.

I had many of the supplies necessary to survive that probably would have put me ahead of most people, but there were some basics that I was missing because I had personally never even considered the possibility of an Ebola outbreak on our shores.

No matter how smug you’re feeling, I guarantee you that you aren’t prepped for everything. That is the thing about disasters – they often take us totally by surprise. A fire starts nearby and travels in your direction. Some business nearby has a terrible industrial accident that exposes everyone in the area to a toxin. You become the victim of a crime. An airborne disease you didn’t even know existed spreads rampantly.

It is the nature of the unpredictable beast.

Fortune does indeed favor the prepared, but before you get too comfortable, keep in mind that a big part of survival is luck.

Regardless of how prepared you are, you can’t outrun epic bad luck. One day, you might hope that other people are less discouraging to you than you are to the folks who are just now realizing they need to get it into gear.

There is plenty of room for more preppers. We aren’t in some kind of position where there is a battle for a handful of scant, remaining resources. You aren’t on a game show where there is only one winner.

The more people who are prepped, the better off we will all be in the long run. When more people are prepared, there will be less desperation, which in turn, means less crime. It means we can be allies instead of enemies if the balloon goes up.

Discouraging people from being prepared gains you nothing except some misplaced sense of superiority.

If you can’t say something constructive, say nothing.

We all get aggravated from time to time and have nothing constructive whatsoever to add. I am not immune to that feeling myself. But perhaps if you are feeling that way, it would be better to say nothing at all than to have your words scare someone away who was just edging into preparedness.

I have started over many times in my life. I endured the devastating loss of a loved one. My home was foreclosed on.  I lost my job. A broken sewage pipe filled my home with waste, destroying my preps. I moved from another country and could not bring my preps.

Often I started over with the discouragement of others ringing in my ears. Had I heard that discouragement at the lowest point, perhaps I would have been driven away from my current path.

You don’t have to be kind to others and help them along their way if that isn’t your cup of tea. But sadistically and mockingly sabotaging their progress is something altogether different.

All preppers are welcome here, whether they are brand new and have a million questions, whether they’re on a tight budget, whether they have different political leanings, or whether they practice a religion that I do not. I just want to see people face the future with confidence and a prepared mindset.

If you’re new and you are reading this, please don’t judge us all by the actions of a vocal minority. We’re glad you’re here and we want to help.

As for you meanies, if you can’t say something nice or encouraging to those people, there are all sorts of forums and other sites where your mockery will make you part of their elite club. This is not that place.

Here, please, bite your tongue and say nothing at all if you can’t be constructive to those who are looking for help. 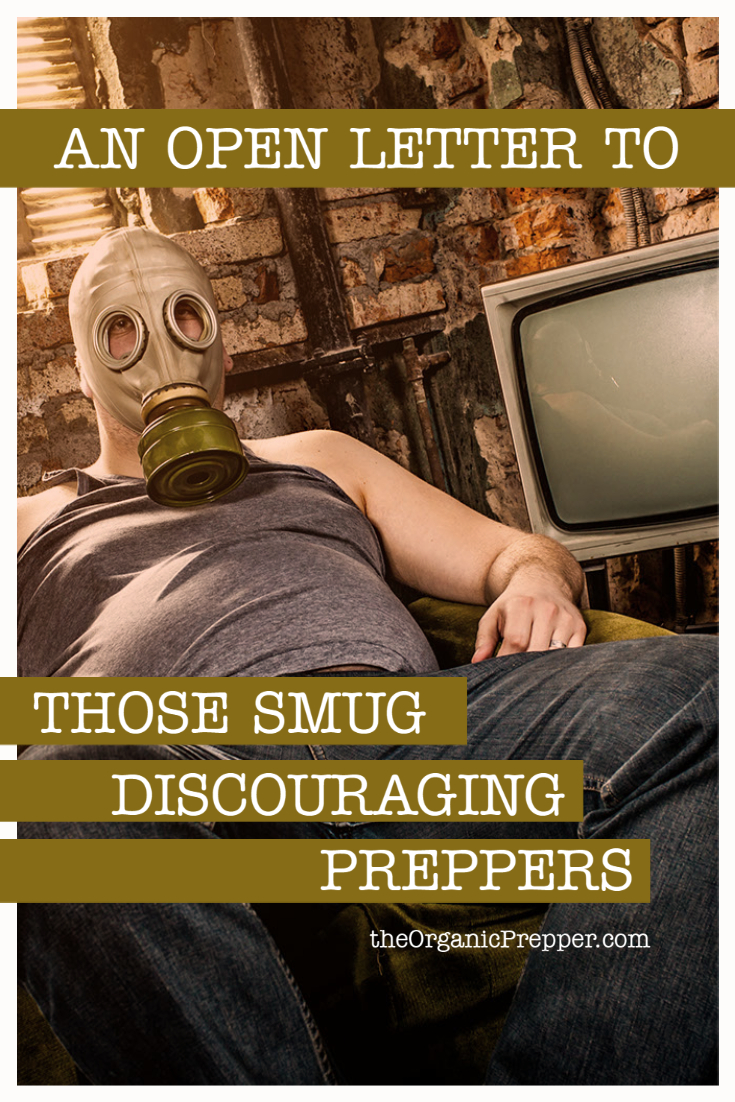