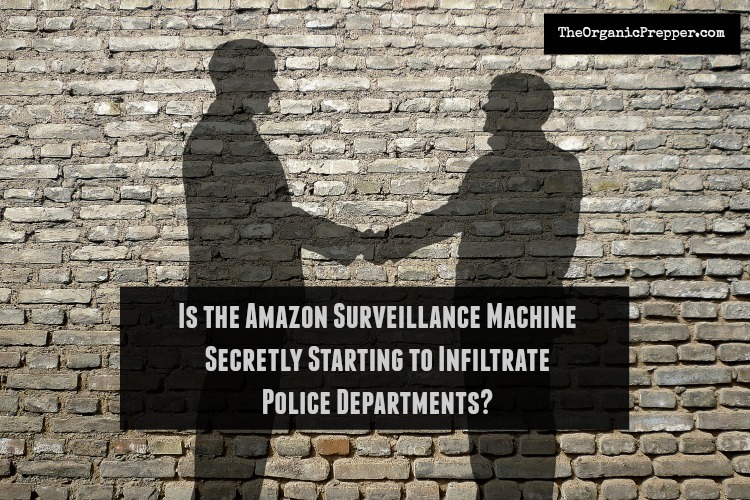 Big Tech has come under fire quite consistently for privacy concerns and has even faced big fines for violations (which they can afford). It seems that public attention on this matter has forced them to start going underground, with secret back-end deals with the government at local levels to expand their surveillance capabilities.

If you haven’t heard, there is a very useful doorbell camera called Ring. Ring started out as a product called, Doorbot, on the Shark Tank TV show but was rejected. The owners got immediate exposure and millions of dollars from investors after the show, changing the name from Doorbot to Ring. Fast forward five years, and Amazon decides to compete with Google’s friendly surveillance system called Nest, and buys Ring for A Billion Freaking Dollars.

Ok, so what? It’s a very useful thing to be able to see who’s at the door and have a record of someone breaking into your home. The systems, in themselves, aren’t an issue. It’s when governments start to get involved and big money starts being made that conflicts of interest can lead to misuse and violations of privacy.

It’s these very expansions outside of the homeowner’s benefit that need scrutiny.

In addition to the actual doorbell surveillance camera itself, Ring/Amazon added a handy online app called, Neighbors, to use these systems to help reduce crime. According to Jamie Siminoff, Chief Inventor and Founder of Ring,

“At Ring, we come to work every day with the mission of reducing crime in neighborhoods. Over the past few years we have learned that, when neighbors, the Ring team and law enforcement all work together, we can create safer communities. Neighbors is meant to facilitate real-time communication between these groups, while maintaining neighbor privacy first and foremost. By bringing security to every neighbor with the free Neighbors app, communities can stay on top of crime and safety alerts as they happen.”

That sounds very good, doesn’t it? This may not seem all that much of an issue on the surface (if we ignore the obvious conflict of interest), but let’s dig deeper…

In addition to a system that allows people to monitor their homes, and then has expanded to help them monitor their neighborhoods, they’ve also developed a government-only backend portal to this system that they provide for free.

According to this article,

“Ring, Amazon’s home security company most known for its doorbell camera, has been quietly creating a massive private surveillance network. The company has formed partnerships with at least 225 law enforcement agencies, enticed cities to finance discounts on its cameras with taxpayer money, and worked with police to organize package theft sting operations in several U.S. cities.”

This portal not only gives the government backdoor access to the Neighbors app to directly contact users, they also have a map of all cameras in the area that they can access.

But it gets worse.

Ring is starting to leverage these backdoor agreements to require these agencies to help them expand their network. According to another article from someone who received private communications between Ring and government agencies, “Police are contractually required to …

“Engage the Lakeland community with outreach efforts on the platform to encourage adoption of the platform/app.”

To assist in that endeavor, Ring is coaching agencies, by way of an assigned Ring Partner Success Associate, on how to leverage social media and community outreach programs to expand their reach by,

Here is an example of one, obtained by an investigator/staff writer at motherboard: 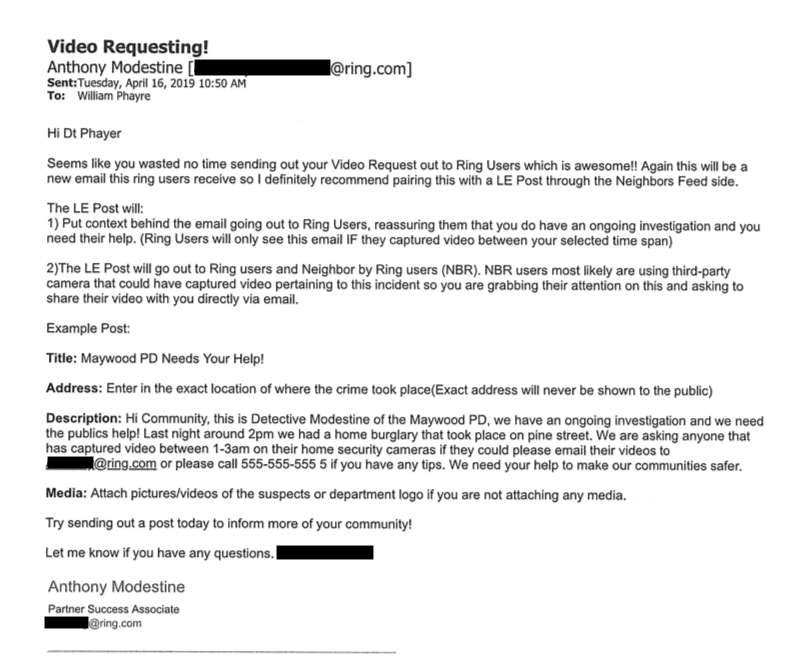 and from obtained correspondence to that same police department,

“You are doing a great job interacting with them and that will be critical in increasing the opt-in rate.”

“The more users you have, the more useful the information you can collect,” the representative added.

But they also stipulate,

Ring requests to look at press releases and any messaging prior to distribution to ensure our company and our products and services are accurately represented.”

The agreement also requires Ring and the Lakeland Police to coordinate on all public communications regarding their partnership.

“The parties shall agree to a joint press release to be mutually agreed upon by the parties,”

Ring also is telling the local agencies to create roles in their departments to facilitate the communication with itself and control the information to the public, presumably to help expand the network, with five created roles:

Now that may be understandable, but they’re also putting pressure on police departments to control the information the public receives about the program:

For nearly three weeks in June, the Boca Raton Police Department was engaged in a partnership with Ring that went publicly unreported. The delay in announcing the city’s deal with Ring occurred at the company’s request. Emails show that Ring was interested in keeping the public’s attention focused on a separate subsidy deal it struck with the city designed, according to the city’s press release, to “incentivize the purchase of Ring Video Doorbells and Ring security devices.”

According to another Vice article,

A signed memorandum of understanding between Ring and the police department of Lakeland, Florida, and emails obtained via a public records request, show that Ring is using local police as a de facto advertising firm. Police are contractually required to “Engage the Lakeland community with outreach efforts on the platform to encourage adoption of the platform/app.”

Not all agencies, however, are laying down as easily. According to Gizmodo:

In Boca Raton, however, city attorneys Thomas Collery and Joni Hamilton refused to accept the terms and managed to get them amended, noting, for example, that Ring’s conditions would run afoul of Florida’s public records laws. The phrase “Unless otherwise required by law, including, but not limited to, public records laws” was added to the agreement Boca Raton ultimately signed. It was also altered to remove the requirement for a “joint press release,” with the city opting instead to give each party the right to approve the other’s individual statements.

At least THEY are requiring their expansion of the surveillance machine be legal. Of course, adopting systems such as this, and then manipulating public perceptions, starts this slippery slope. According to Chris Gilliard, a professor of English at Macomb Community College who studies digital redlining and discriminatory practices enabled by data mining,

When really powerful companies, or police for that matter, are incentivized to find crime, they’re going to find it no matter what. It’ll ultimately shift the definition of what is a crime and lead to over-policing in some ways. Frankly, [it’s] the broken windows style that tends to harm marginalized communities more.”

Keep in mind that this video footage that you’re recording for your own use can be taken by law enforcement via a warrant, but Ring/Amazon is also coaching the agencies on how to influence people to give up the information willingly. According to Vice,

emails from the police department of Bloomfield, NJ, which were also posted by Wired—show that Ring coaches police on how to obtain footage. The company provides cops with templates for requesting footage, which they do not need a court warrant to do.

Andrew Ferguson, a professor at the University of the District of Columbia School of Law,

“What people fundamentally misunderstand is that self-surveillance is potentially a form of government surveillance, because the information that you are collecting—you think to augment and improve your life—is one step away from being obtained by law enforcement to completely upend your life.”

According to an article on The Intercept, regarding a police-only video,

The video ends on an eerie note, adding that “in future versions we will also be enabling Ring’s smart search functionality that will allow for suspicious activity detection and person recognition.” What constitutes “suspicious activity” is anyone’s guess, as is how Ring will “detect” it.

gives law enforcement “coercive power over customers” by virtue of its design. “Many people are not going to feel like they have a choice when law enforcement asks for access to their footage.”

Cagle goes on to say:

“Consent here is a smokescreen. Folks online consent to policies all the time without being meaningfully explained what is happening with our data, and the stakes are much higher here: Under guise of consent, this could invite needless surveillance of private lives.”

If you agree, there is something you can do about it. Fight for the Future is running a campaign specifically to stop this collusion. According to the petition:

Amazon is building a privately run, for-profit surveillance state—and they’re getting local police to market it for them in exchange for VIP access to Amazon’s on-demand surveillance system.

Does the alliance of the surveillance state and Big Tech concern you? Or, are you no longer shocked by these revelations? Do you think there is much we can do about it? Please share your thoughts in the comments.

As the former Director of Alliteration for the Association of Redundancy Association, Eta has developed a tautological approach to obfuscation through recursion and periodicity.