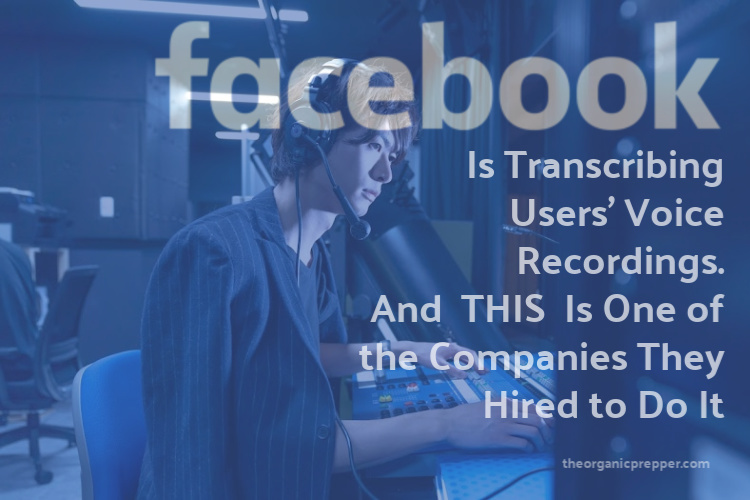 Big tech companies like Google and Apple have been under fire recently for violations of privacy laws and even been accused of outright supporting surveillance of private citizens. Amazon has been accused of keeping recordings that they shouldn’t have. It appears that the trend continues.

The most recent apparent violator this time is Facebook.

Now, Facebook hasn’t exactly been a paragon of virtue when it comes to privacy ethics and policies in the past. Here are just a few privacy issues over the years that show a clear and consistent behavior to eroding user privacy:

When it was only two years old, they came under fire for showing users what their friends had recently purchased.

A year later, they were caught selling user information and activity in a project called Beacon, leading to a $9.5 million settlement.

A few months later, a complaint is filed with the Privacy Commissioner of Canada concerning the “unnecessary and non-consensual collection and use of personal information by Facebook”

In 2009, Canada determined Facebook violated the Personal Information Protection and Electronic Documents Act and forced them to make adjustments.

A few months later, the ACLU warned that facebook’s quiz apps could be used to collect user information without their consent, and even made their own quiz to prove it.

At the end of 2009, Facebook for some reason decided to change everyone’s default settings to make all.user’s information public and exposed it to google indexing.

Also at the end of 2009, the Electronic Privacy Information Center (EPIC) filed a complaint with the FTC. According to the followup supplemental information in the complaint,

“Facebook’s actions injure users throughout the United States by invading their privacy; allowing for disclosure and use of information in ways and for purposes other than those consented to or relied upon by such users; causing them to believe falsely that they have full control over the use of their information; and undermining the ability of users to avail themselves of the privacy protections promised by the company”

Facebook has a history of sharing user data with other companies.

In April of the next year (2010), four senators call out Facebook for making personal data public, allowing third-party advertisers to store user data, and potentially giving advertisers access to friend’s data via the Instant Personalization function, which is automatically set to opt-in unless a user finds it in the menu and opts out.

In May 2010, Facebook was accused of, yet again, changing user default settings to share everything publically, so they changed their settings, hoping to avoid a backlash.

Also in May, EPIC filed another complaint, this time about Facebook sharing data with several corporations. According to the complaint,

This complaint concerns material changes to privacy settings made by Facebook, the largest social network service in the United States, that adversely impact the users of the service. Facebook now discloses personal information to the public that Facebook users previously restricted. Facebook now discloses personal information to third parties that Facebook users previously did not make available. These changes violate user expectations, diminish user privacy, and contradict Facebook’s own representations. These business practices are Unfair and Deceptive Trade Practices, subject to review by the Federal Trade Commission (the “Commission”) under section 5 of the Federal Trade Commission Act.

In October 2018, the Attorney General of the US in Washington, D.C. sued and the FTC approved fining them $5 billion for privacy violations when it allowed user data to be shared with Cambridge Analytica, apparently to be used in presidential elections and important political decisions, without disclosing this to the users.

As previously, Facebook previously denied any wrongdoing, and according to CEO Mark Zuckerberg during a Congressional inquiry in April 2018, “You’re talking about this conspiracy theory that gets passed around, that we listen to what’s going on on your microphone and we use that for ads. We don’t do that.”

Now I could go on and on and on about Facebook’s history with privacy concerns but this would be a ridiculously long article if I did, and would not be news. If you’d like to read more detail about that, check out this article by TechCrunch.

Ok, fine. let’s give him the benefit of the doubt and assume they haven’t changed their policies since then but after what I’m about to tell you, they have some more ‘splainin’ to do.

This time, Facebook has been caught giving user data to a controversial company.

According to Bloomberg/Time, they’re at it again. In an article released yesterday, Facebook has been hiring companies to transcribe users’ voice recordings, and it’s been withholding that fact from its users. Since Zuckerberg’s on the record that they haven’t been using this information for ads, we should rest easy, right?

One of the companies that has apparently been transcribing your conversations is TaskUs Inc. Let’s dive in for a minute and look at them.

In August 2018, the Blackstone Group invested $250 million in TaskUs, taking their valuation up to about half a billion. Now, why do we care about that? In 2017, they were all set to acquire the Israeli NSO Group but the deal fell through when, according to researchers, NSO’s spy software, Pegasus, was used at least 11 times to track down and spy on journalists, resulting in several mysterious deaths. Could this TaskUs/Facebook revelation be just the tip of the iceberg for some systematic power grab of high-end surveillance tech and enablers for political influence?

According to the Bloomberg article, “Facebook is one of TaskUs’s largest and most important clients, but employees aren’t allowed to mention publicly who their work is for.” In addition to transcribing these conversations for Facebook, their sources said that TaskUs helps Facebook prepare for elections and in screening political ads.

Also according to the article (speaking about the unnamed employee/sources in the article), “They call the client by the code name “Prism.”

Now, what does Prism have to do with any of this? Who knows. It could be just the name of someone’s dog for all I know.

I will, however, just leave you with this link to ponder.

What do you think this new revelation means? Do you still use Facebook? Are you concerned about your privacy online? Please share your thoughts in the comments.

As the former Director of Alliteration for the Association of Redundancy Association, Eta has developed a tautological approach to obfuscation through recursion and periodicity.