Affluenza: Too Rich to Be Punished, a Teen Gets Away with Murder…Literally 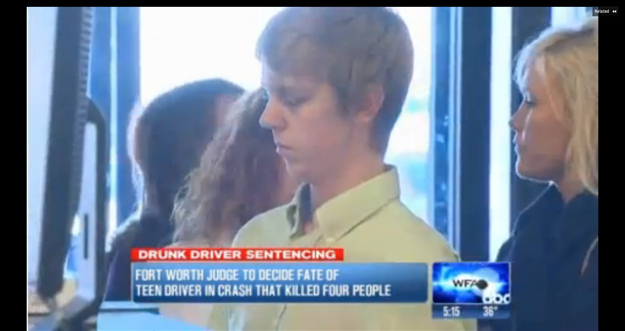 A 16 year old boy from a wealthy Texas family was driving drunk when he crashed into four people standing at the side of the road with a disabled vehicle. Four of his own passengers were thrown from the vehicle, one of whom suffered a brain injury and can no longer move or speak.

Authorities have said the teen and friends were seen on surveillance video stealing two cases of beer from a store. He had seven passengers in his Ford F-350 pickup, was speeding and had a blood-alcohol level three times the legal limit, according to trial testimony. His truck slammed into four people standing near a disabled car on Burleson-Retta Road, killing Brian Jennings, 43, Breanna Mitchell, 24, Shelby Boyles, 21, and her mother, Hollie Boyles, 52. (source)

According to the courts, however, it wasn’t really Ethan Couch’s fault.  He can’t help it that he suffers from a condition called “affluenza”.

You read that right – “affluenza”.  It sounds like some kind of contagious disease, but in reality, it is an excuse for horrendous behavior.

It means that because Ethan grew up rich, he is not responsible for his own actions.

[Psychologist Dr. G. Dick ] Miller said Couch’s parents gave him “freedoms no young person should have.” He called Couch a product of “affluenza,” where his family felt that wealth bought privilege and there was no rational link between behavior and consequences.

He said Couch got whatever he wanted. As an example, Miller said Couch’s parents gave no punishment after police ticketed the then-15-year-old when he was found in a parked pickup with a passed-out and undressed 14-year-old girl.

Miller also pointed out that Couch was allowed to drive at age 13. He said the teen was emotionally flat and needed years of therapy. (source)

Despite the fact that Ethan Couch pleaded guilty to drunk driving and manslaughter, he will serve no jail time.

He will be on probation for 10 years.

Through his spoiled, irresponsible actions, he caused the death of 4 people and altered irrevocably the life of another person.

Wealth is not a mental illness. Plenty of children grow up with families who have money and are raised in loving homes, with limits on their behavior.  This is nothing more than an excuse for dreadful parenting and a way to let the rich live by a different set of rules than the rest of us.

Dr. Gary Buffone, a psychologist from Jacksonville, Fla. who deals with wealthy families says that “affluenza” is not meant to be a defense.

“The simple term would be spoiled brat,” he said.

“Essentially what he (the judge) has done is slapped this child on the wrist for what is obviously a very serious offense which he would be responsible for in any other situation,” Buffone said. “The defense is laughable, the disposition is horrifying … not only haven’t the parents set any consequences, but it’s being reinforced by the judge’s actions.” (source)

Money buys justice in America, apparently. If you are wealthy enough, there are no consequences to your actions, no matter what the harm to others who are less wealthy. The financially elite have a different set of rules than the rest of us and clearly, the laws just don’t apply to them.

The families of Ethan’s victims are outraged by the slap on the wrist that the careless teenager received.

“Money always seems to keep you out of trouble,” Boyles said. “Ultimately today, I felt that money did prevail. If you had been any other youth, I feel like the circumstances would have been different.”

The defense team recommended a long probationary term at a rehabilitation center near Newport Beach, Calif., with the teen’s parents picking up the tab of more than $450,000 a year for treatment.

Shaunna Jennings, the widow of the minister killed in the accident, said her family had forgiven the teen but still believed a sterner punishment was needed.

Ethan can now return to his swanky lifestyle.  He can enjoy Christmas with his loved ones. He can unwrap expensive presents in front of a fancy tree.  He can enjoy a catered feast.

Here are the victims of Ethan Couch.  They will not be celebrating Christmas this year. 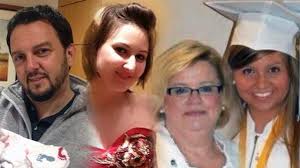 The families of Couch’s victims have a sad holiday ahead of them.  They’ll be mourning the loss of their spouses, parents, and children this year, probably in much more humble surroundings than that in which the Couch family Christmas will take place.  There will be empty seats at their dinner table and empty places in their hearts.

All because one spoiled boy’s family couldn’t say no to him and because a judge believes that being rich is an excuse to let someone get away with murder.

Originally published at The Daily Sheeple