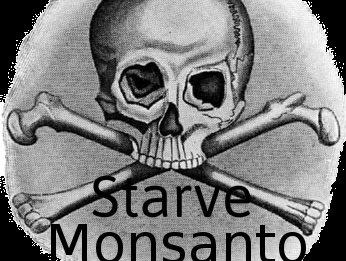 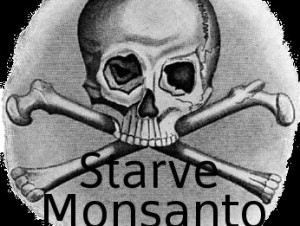 Monsanto seems intent on taking over the food supply of the entire world.  Their sterile, toxic seeds are in every corner of the globe.  Hungary recently made headlines for burning 1000 acres of fields of GMO crops to the ground. Dozens of nations have banned, or at the very least, regulated, GMO crops and products.  The heat is on the monolithic seed corporation, and it’s time to turn the temperature up even more in North America.  The federal government has made no secret of their support of Monsanto, so it’s up to us, the consumers, to starve them out.

The best way to do that, according to the founder of Eat Local Grown, Rick Davis, is to “Starve Monsanto, feed a farmer.”

Every dollar we put into the pockets of small farmers is a dollar that Monsanto doesn’t receive.  By cutting off the funding for Monsanto through consumer choices, we can starve this beast out.

Davis is passionate about the place of farmer’s markets in this checkout counter revolution:

Money is all that matters. So let’s use our money more wisely to get the changes we want. First step- stop buying GMO and conventionally grown food. Move those dollars to supporting local sustainable farmers!

I realize that’s difficult and impossible for many. But if we had a shift of just 10% of peoples shopping income going to Farmers Markets it would make a HUGE difference. The sad reality is that most small family farms are required to have at least one family member work outside of the farm just to make ends meet. It’s not because they don’t do a good job growing healthy food, it’s because there’s just not enough awareness of the benefits (nutrition, helping the environment, building community, etc).

Every bite of food that you feed your family is a vote, either for Monsanto and their GMOs, or against them.  This means that every single one of us can effect the necessary change by voting with our forks and wallets.

We can all take steps to grow at least some of the food that we consume, through traditional gardens, containers on the patio or balcony, or even a sunny window.  But for city dwellers or those who live in an area otherwise not conducive to farming, it isn’t feasible to think that they can grow every single bite that they eat.  Not to worry, though, because activism is as easy as heading to your local farmer’s market instead of the grocery store. (You can find farmer’s markets in your area HERE.)

Here are 10 ways to starve a multi-national GMO conglomerate even when you don’t have room to farm – and the best news of all is that ANYONE can get started as soon as lunch time!

Grass roots activism like Occupy Monsanto and the March Against Monsanto have built a tidal wave of momentum against the genetically modified ingredients contaminating our supplies.  We, everyday, ordinary people, can keep the movement going by remembering that the real votes are counted at the cash register.