Without Rule of Law: How to Survive a Real Life Purge Like the One in Brazil 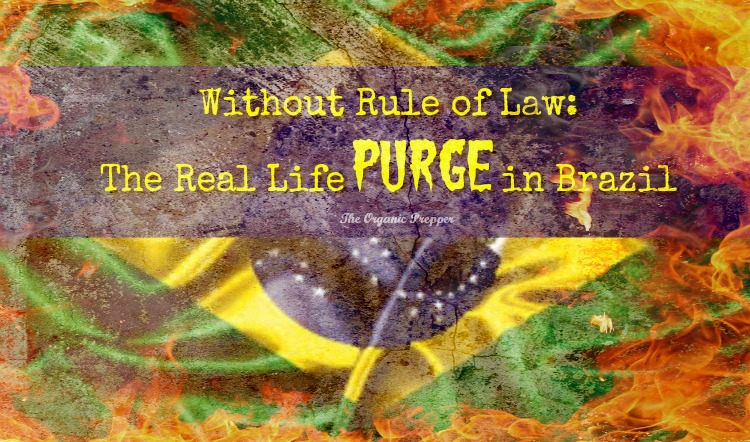 In southeastern Brazil, a real-life version of the movie The Purge is going on.

Police officers in the state of Espirito Santo went on strike Friday. Their families have barricaded the exits of eleven law enforcement barracks, preventing any officers from performing their jobs.

And the state has descended into a kind of anarchy usually reserved for post-apocalyptic movies.

The Brazilian website Globo.com reported on the dire situation.

Murders have increased by a thousand percent, with 62 people being killed over the course of three days.  While that sounds like a normal weekend in Chicago here, the state only had four murders in the entire month of January. There are so many dead that they’ve exceeded the capacity of the morgue to hold them all, and corpses are lying on the ground.

Stores have been vandalized and looted, some of them utterly destroyed. Many merchants have boarded up their windows and will remain closed for the duration of the crisis.

Gangs have taken over the cities, and the military has been dispatched to regain order.

This has been pretty much blacked out by the media but I was able to find one video showing what it really looks like down there.

Without Rule of Law

This is a classic example of what can happen when society is Without Rule of Law (WROL), a common term that preppers use to describe a complete breakdown of society and the rules that maintain order. (Here is the best book you can buy for surviving this type of scenario.)

Now, look at the situation here in American cities right now. Thankfully, we haven’t devolved to this point yet, but the protests about the Trump administration just keep escalating. We have cities, even states, that are willfully refusing to comply with executive orders regarding changes in immigration policies.

But what’s worse is that we have outraged Leftists who are talking about escalating the situation. There is much discussion over whether or not violence is justified to silence Trump and his supporters.

At the very least, a lot of people seem totally unbothered at the thought of politically motivated attacks against people they think of as Nazis — a group that’s so extreme and evil from the perspective of everyday Americans that it merits extreme action to fight. In this way, that an explicitly racist person’s safety is considered a non-concern sends a message about how unacceptable bigoted views like Spencer’s are in America.

There is a political strategy to this. A key part of the anti-fascist movement — often called “antifa” — is that fascists can’t be allowed to have a platform at any cost. Under this view, the punch isn’t about simply feeling good about beating up a “Nazi” (even if it does feel good to some) but about robbing people like [Richard] Spencer of a voice.

Antifa protesters are clear that this is a strategy explicitly to deal with fascism, not just any political view that you disagree with. Neo-Nazi, fascist, and racist views, the argument goes, are so extreme that they justify extreme tactics. The worry: If these views aren’t completely robbed of any kind of platform, they could gain legitimacy — and take advantage of liberal ideals like free speech to, ironically, promote their very illiberal messages. (source)

Take a moment to guffaw at the irony in the above quote of free speech being a liberal ideal, as the entire premise of punching the person is to silence his unpopular free speech. And these people aren’t alone. After the recent riot in Berkley, California, a student published this Op-Ed explaining how they had to get violent in self-defense because people were saying stuff they didn’t like. I wish I was making this up.

What I’m saying is that the insanity in Brazil is not so far-fetched. We’re currently going down a road in America in which we are being programmed to be at each other’s throats. We’ve been set up to turn on each other and to fear each other. We’re being set up for Civil War.

Watch this quick video about how we’re all being brainwashed. (Note: you may not like it, but if you watch with an open mind, you’ll see that it’s the truth.)

How do you prepare before the violence reaches the streets of America?

Now, whether or not you believe this is a deliberate attempt to cause a crisis, the fact remains that we are right on the cusp of our own version of the Brazilian Purge. Most of us prefer peace, and that’s why I’m recommending a defensive strategy in the event things go south.

You need to plan to hunker down in your home. If there is unchecked violence on the streets, you don’t want to be there. Right now in Brazil, going to the corner store (assuming it’s even open) to pick up a gallon of milk is to risk your very life.

Many of you reading this will already be well-prepared to face a week or two in lockdown. If you’re not, you must realize that when violence erupts, there will not be time for a last minute run to the store.

It is absolutely essential to stay on top of the news. The earlier you realize something major is occurring, the sooner you can get your family locked down safely. (Go here to sign up for daily email tips and alerts.)

Food. Get at least one bucket of emergency food for each member of your family. Each bucket is a one month supply for one person.  It is shelf stable (in case the power is affected) and only requires the ability to boil water. (Gluten-free buckets are also available as are options with larger quantities.)

Have a way to boil water. This inexpensive stove can be used indoors. Be sure to stock up on butane canisters to use with it.

Stock up on dry milk. The very first thing that most families run out of in an emergency is milk, so be sure that you have a shelf-stable option. A case of hormone-free dry milk is an excellent investment.

Medicine. Make sure you have at least a one month supply of any necessary prescription medications.

Also be certain to have these items on hand:

How to stay safe

Below, find an excerpt from my article “Are You Prepared for Lockdown?” with further security measures you should be prepared to take in the event of extreme civil unrest.

Try to stay under the radar.

Your best defense is avoiding the fight altogether. You want to stay under the radar and not draw attention to yourself.  The extent to which you strive to do this should be based on the severity of the unrest in your area. Some of the following recommendations are not necessary for an everyday grid-down scenario but could save your life in a more extreme civil unrest situation.

Be prepared to defend your family.

If despite your best efforts, your property draws the attention of people with ill intent, you must be ready to defend your family. Sometimes despite our best intentions, the fight comes to us.

Many preppers stockpile weapons and ammunition for just such an event.  I know that I certainly do. Firearms are an equalizer. A small woman can defend herself from multiple large intruders with a firearm if she’s had some training and knows how to use it properly. But put a kitchen knife in her hand against those same intruders, and her odds decrease exponentially.

Even if your plan is to bug in, you must be ready to change that plan in the blink of an eye. Plan an escape route.  If the odds are against you, if your house catches on fire, if thugs are kicking in your front door… devise a way to get your family to safety.  Your property is not worth your life. Be wise enough to accept that the situation has changed and move rapidly to Plan B.

If trouble comes to your neighborhood and you decide to stick around, stay home.

It’s the number one way to keep yourself safer from during a civil unrest situation. If you find yourself in an area under siege, the odds will be further on your side for every interaction in which you avoid taking part. Every single time you leave the house, you increase your chances of an unpleasant encounter.  Nothing will be accomplished by going out during a chaotic situation.

Be ready for this.

There will be no last-minute runs to the store. If a WROL situation goes down, you will have to stay home and make the best of what you have on hand. The steps that you take now to prepare can determine how well that goes for you. You don’t want to look back and wish you’d done more to protect your family.