Why Is Gut-Wrecking Carrageenan in So Many Organic Food Products? 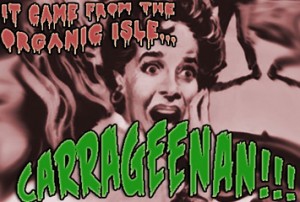 Note from Daisy:  Truthstream’s article has appeared on numerous sites across alternative media and it is on-point to the extent that one particular person has taken issue with it on almost every outlet where it appeared.  Interestingly enough, the woman, named Debbie, happens to work for the world’s largest supplier of carrageenan (Ingredients Solutions). She  has attempted to “debunk” the article  with transparent propaganda.  So be aware that paid trolls are afoot and they really, really don’t want people to be informed about this ingredient. Maybe it’s even worse than we think?  Be sure and check out Truthstream’s response to “Debbie”.

by Aaron Dykes and Melissa Melton

“During the past decade carrageenan has become much used experimentally mainly for its ability to induce an acute inflammation.” — Di Rosa M, 1972

Independent research has suggested that carrageenan is a dangerous food additive. It’s extracted from seaweed and reportedly causes inflammation of the gut — although it is widely used in our food supply today, independent studies have shown it has no place in our food, but especially not in organic/natural products. It is a cheap emulsifier, and although alternatives like guar gum and carob bean gum do not have any of the same risks and side effects, carrageenan has strong lobbies behind it. The industry lobbied the USDA Organic Standards Board for its approval, so there it is.

Dr. Joanne Tobacman has researched carrageenan extensively, and testified before the Organic Standards Board to argue against its approval for organic products, but was ignored. In just one of her many studies, Tobacman covered the risk of this food additive in her research paper Review of harmful gastrointestinal effects of carrageenan in animal experiments, arguing in the abstract:

In fact, an investigative reporter from the Chicago Tribune asked the FDA to turn over even one peer-reviewed independent study — that is, one study not funded by carrageenan manufacturers — which showed that this additive was indeed safe and the FDA did not do it. The carrageenan lobbies, not surprisingly, did not provide any either.

Tons of foods at Whole Foods include this ingredient. We have left the following comments at Whole Foods, including contact info, about this dangerous ingredient that shows up in all kinds of “organic” and “natural” foods – ranging from ice cream, to coconut milk and even meat! It’s even used in infant formula. So far, we have not heard back from anyone (but at least they take the comments).

Carrageenan! After years of seeing this seemingly benign ingredient on labels on mostly organic products, I finally learned it is connected with gastrointestinal issues and even cancer (high doses used to induce cancer in lab animals). Several days of research (via Cornucopia Institute, etc.) have revealed a backstory of corrupt politics with the USDA National Organic Standards Board — which Whole Foods sits on — regarding carrageenan. This is unappreciated.

We call out Whole Foods specifically because they charge a premium for their products while riding on the idea of pure, unadulterated food.

Why is carrageenan so widely used in foods — and especially in organic and “natural” foods that people pay more for in order to avoid unhealthy ingredients — despite the known risks from decades of scientific studies?

The Cornucopia Institute addressed the apparent corruption behind this issue, reporting that:

For the past two decades, food industry executives and lobbyists have managed to convince enough members of the National Organic Standards Board (NOSB)—the 15-member citizen panel of organic stakeholders that determines which non-organic ingredients can be used in organic foods—to give carrageenan its stamp of approval. Their tactics have become increasingly more manipulative and ethically questionable as it becomes clearer that scientific evidence is not on their side.

The NOSB first approved carrageenan in the mid-1990s. As required by law, the USDA had hired three “independent” contractors to perform a thorough scientific and technical review of the additive.

Their job was to provide an independent review, including any concerns about the additive’s effects on human health or the environment. In their official reports to the NOSB, the three contractors assured the NOSB that no effects on human health had been identified. [Editor’s Note: the full Cornucopia Institute report describes the conflicts of interest held by these “independent” contractors]

Carrageenan came up for periodic review at the May, 2012 meeting with the NOSB debating if it should be “relisted” on the National List of allowed synthetics and non-organics. Industry lobbyists presented misinformation about carrageenan’s safety and questioned the credibility of independent research commissioned by the National Institutes of Health.

One of the NOSB members took an active role in assisting the carrageenan manufacturers. At one point, she read lengthy excerpts from a document written by the carrageenan manufacturers’ trade lobby group, Marinalg, defending the safety of carrageenan. But before reading these lengthy excerpts, the Board member misidentified the excerpts as “being from JECFA, a United Nations/FAO body” when in fact they were written by the industry’s lobby group. Pretty infuriating, right? How can research from a biased lobby group be mistaken for a United Nations/FAO study?

The NOSB voted, by a slim one-vote margin, to re-approve the use of carrageenan in organic foods for another five-year period.

The Cornucopia Institute has been the leading advocate on the carrageenan issue, which I think is particularly important given the widespread prevalence of digestive disorders ranging from Irritable Bowel Syndrome to Crohn’s Disease, Celiac Disease, gluten intolerance, leaky gut, colitis, and more, as well as a dramatic increase in food allergies over the past several decades.

CDC: 50% Increase in Food Allergies Over the Last Decade
Web MD: Food Allergies Have Doubled Among Black Children
ABC News: Food Allergies in Kids On the Rise
National Center for Biotechnology Information: Time trends in allergic disorders in the UK

The Cornucopia Institute has provided this shopping guide as a resource to avoid carrageenan. Meanwhile, they also have a petition that you can send to the USDA to urge to removal of carrageenan from the list of approved organic ingredients.

While the entire food system in this country needs a complete overhaul, and there are countless dangerous ingredients that need to be reigned in lurking on our grocery store shelves, it is important that the organic label actually means something and provides a viable option for consumers to at least attempt to avoid the downright junk that is passed off as food today. The organic label is one of the last bastions of food safety in America.

As the Cornucopia Institute writes: “Organic foods should be a safe haven from harmful ingredients. In fact, the Organic Foods Production Act of 1990, the law governing organic foods, requires that non-agricultural ingredients must be determined safe to human health and not deleterious to the environment before they can be added to organic foods. After all, if organic food isn’t safer than conventional food, what’s the point, right?”

Aaron Dykes and Melissa Melton created Truthstream Media.com as an outlet to examine the news, uncover the deceptions, pierce through the fabric of illusions, know the real enemy, unshackle from the system, and begin to imagine the path towards taking back our lives, one step at a time, so that one day we might truly be free…
Share54
Tweet
Pin4
Share
58 Shares