Why Does Monsanto Need an Army of Mercenary Soldiers? 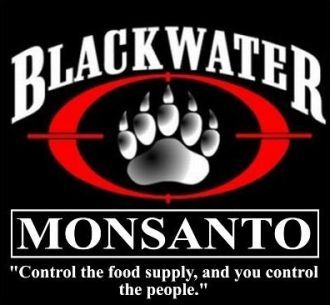 The Monsanto Company likes to proclaim that they are the good guys, here to selflessly feed the world, help with sustainable agriculture, and, as if those lofty goals are not enough, champion human rights across the globe.  All you have to do is look at their commitments page to see how worthy they are of a shiny corporate halo:

At the heart of Monsanto is a very clear and principled code of conduct – one we expect all employees, contractors and management to live by every day. We operate under a genuine value system—our pledge—that demonstrates integrity, respect, ethical behavior, perspective and honesty as a foundation for everything we do.

A key part of fulfilling the promise of our value system is by engaging our communities in a significant and positive manner. Not only do we work hard to support the family farmer in a variety of ways, but we also:

If you happen to have your hip-wader boots on, you can delve even further into their purported goodness by reading, in it’s entirety, The Monsanto Pledge:

The Monsanto Pledge is our commitment to how we do business. It is a declaration that compels us to listen more, to consider our actions and their impact broadly, and to lead responsibly. It helps us to convert our values into actions, and to make clear who we are and what we champion.

At the risk of your breakfast, click HERE to learn more about Monsanto’s commitment to integrity, dialogue, transparency, sharing, benefits, respect, acting as owners to achieve results, and creating a great place to work.

Monsanto’s CEO, Hugh Grant, has long been of the opinion that the company is deeply misunderstood.

“From his point of view, the company is working on the side of angels, helping to create commodity crops to feed today’s population and the 2 billion more people who might occupy the planet by 2030. He is proud that Monsanto scientists were among the first to have a patented genetically modified plant on the market—Roundup Ready soybeans were introduced in 1996—and he is excited about new efforts to bioengineer wheat and vegetables, too, as well as the next generation of super beans and corn.” (source)

So why does such a noble, benevolent company require the services of the most notorious mercenary army of modern times?  Why did Monsanto dish out half a million dollars to an arm of Blackwater called Total Intelligence (which now operates under the acronym OODA)?

Blackwater is now known as Academi.  According to Wikipedia, the company:

“…previously known as Xe Services LLC, Blackwater USA and Blackwater Worldwide—is a private military company founded in 1997 by Erik Prince and Al Clark. Academi is currently the largest of the U.S. State Department’s three private security contractors. Academi provided diplomatic security services in Iraq to the United States federal government on a contractual basis.  Academi also has a research and development wing that was responsible for developing the Grizzly APC along with other military technology. The company’s headquarters is located in Arlington County, Virginia.”

They have made numerous attempts to rebrand their hit squads, changing the company name (Xe and Academi) and creating subsidiaries (Total Intelligence, The Terrorism Research Center, and Greystone, to name a few).  They have reportedly done business under the names of at least 30 shell companies.  Despite their tarnished reputation gained from, for one example, gunning down civilians, in 2010, CIA head Leon Panetta awarded them a classified $100 million dollar security contract.

How are Blackwater and Monsanto connected?

While rumor had it that Monsanto had actually purchased Blackwater, that is not the case. Monsanto contracted with the mercenary group for “security services”.  In 2010, an illuminating report called Blackwater’s Black Ops, written by Jeremy Scahill, of The Nation, revealed that Monsanto had given a contract worth up to half a million dollars to Blackwater.

According to internal Total Intelligence communications, biotech giant Monsanto—the world’s largest supplier of genetically modified seeds—hired the firm in 2008–09. The relationship between the two companies appears to have been solidified in January 2008 when Total Intelligence chair Cofer Black traveled to Zurich to meet with Kevin Wilson, Monsanto’s security manager for global issues.

After the meeting in Zurich, Black sent an e-mail to other Blackwater executives, including to Prince and Prado at their Blackwater e-mail addresses. Black wrote that Wilson “understands that we can span collection from internet, to reach out, to boots on the ground on legit basis protecting the Monsanto [brand] name…. Ahead of the curve info and insight/heads up is what he is looking for.” Black added that Total Intelligence “would develop into acting as intel arm of Monsanto.” Black also noted that Monsanto was concerned about animal rights activists and that they discussed how Blackwater “could have our person(s) actually join [activist] group(s) legally.” Black wrote that initial payments to Total Intelligence would be paid out of Monsanto’s “generous protection budget” but would eventually become a line item in the company’s annual budget. He estimated the potential payments to Total Intelligence at between $100,000 and $500,000. According to documents, Monsanto paid Total Intelligence $127,000 in 2008 and $105,000 in 2009.

Reached by telephone and asked about the meeting with Black in Zurich, Monsanto’s Wilson initially said, “I’m not going to discuss it with you.” In a subsequent e-mail to The Nation, Wilson confirmed he met Black in Zurich and that Monsanto hired Total Intelligence in 2008 and worked with the company until early 2010. He denied that he and Black discussed infiltrating animal rights groups, stating “there was no such discussion.” He claimed that Total Intelligence only provided Monsanto “with reports about the activities of groups or individuals that could pose a risk to company personnel or operations around the world which were developed by monitoring local media reports and other publicly available information. The subject matter ranged from information regarding terrorist incidents in Asia or kidnappings in Central America to scanning the content of activist blogs and websites.” Wilson asserted that Black told him Total Intelligence was “a completely separate entity from Blackwater.”

How does this affect the current wave of activism against Monsanto?

Although there is no clear evidence that Monsanto and Blackwater are working together against current activists, a recent spate of odd activity indicates that Monsanto is taking surreptitious action against the movement, whether on their own or through the use of “contractors”.    They have engaged in a social media war against activists.  Mysterious things have been occurring on the social networks: posts have disappeared, some posts are hidden from the timelines of readers, and trolls abound on pages promoting this weekend’s March Against Monsanto, happening worldwide on May 25.

After I wrote the article yesterday regarding the odd issues with social media, I was flooded with emails and comments from readers, verifying they, too, had difficulty sharing information related to the March.  Accounts had been banned and blocked by Facebook. Videos had vanished from Youtube.  I even heard from the editor of From the Trenches World Report, who had intercepted a comment that was allegedly from me, saying that the March had been cancelled.

Monsanto has a history of hiring an unscrupulous mercenary army.  Be aware during this weekend’s activism that agent provocateurs may be afoot, particularly at the larger events.  Don’t rise to the bait of those who would try to deflect protesters from their goal. The goal remains clear – we are there to peacefully spread awareness about Monsanto and about the health and environmental hazards of GMOs.  Around the world, the movement for real food has created an enormous global awakening.  Through the power of social media and alternative news, we are cresting a wave with this event.  We must maintain our unity and momentum, and stay focused on the goal, because with every attack made against us, we may be reassured that Monsanto is on the run.