What “A Tree Grows in Brooklyn” Taught Me About Survival 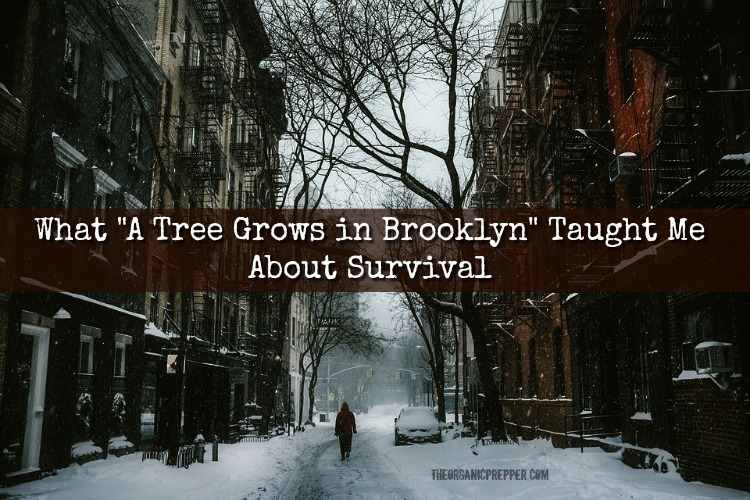 Survival isn’t just a “someday” mindset – it’s how to insulate yourself from the elements, extreme deprivation, and nary-do-wells – at all times. Right now. It’s a complete awareness at all times in your life, but it’s also an extraordinary resiliency. It’s knowing the ultimate Truth that life is difficult – when it rains, it avalanches – and the most important tools you have are actually within.

It’s also the realization that when you cry, you cry alone. It’s a truth that when the bottom falls out from your life, you must roll up your sleeves and face it head on – there are no shortcuts, and yet you are silently expected to be resourceful. It’s resisting the temptation to outsource your care and survival the way most folks are conditioned to do at a frightening degree. It’s the drive to rise above the rest although they may be like the proverbial Grasshoppers in the Aesop’s Fable – and you’re busy building your little dirt tunnels wondering if it really pays to be an Ant.

It’s not just a bare-bones survivalism either. Who’s buying that gospel? Life is more than tactical gear and pretty bug-out bags. Otherwise, you use all your moments obsessing over your body’s survival and regret all the moments you didn’t actually live. Your spirit must be free, too. A life of bare-bones survival is for sure a life of “quiet desperation.” Your values and moral code and your family should always come first. Surviving means knowing how to laugh and delight in the joys of life, too.

Pondering these things and my own adversities has brought to mind a poignant novel I read years ago. A Tree Grows in Brooklyn by Betty Smith is a semi-autobiographical novel published in 1943 about a poor family trying to make it in a Brooklyn apartment building in the early 1900s.

Little did I know that reading this gem of a book would stay with me as I faced the issues of growing up in poverty in the latter half of the century and after the housing crash, too. Just as in the book, the “American dream” isn’t awaiting anyone on a silver platter. But amazing possibilities are there if one will open their eyes to opportunity and live.

What the book is all about

The book centers around the Nolan family, second-generation Americans who inexplicably keep going despite all the pitfalls and temptations of life when you have so little. The protagonist of the novel is daughter Francie Nolan – most of the story stems from her thoughts, fantasies, desires, anger, ideals, and ambitions.

A “Tree of Heaven” tree sprouts up outside her window and keeps growing despite being in the middle of an urban environment. It thrives through the pavement alongside the building despite all attempts to destroy it. This, of course, forms the silent and beautiful metaphor of Francie Nolan throughout the book.

***Possible light spoilers ahead – look for the line where they end***

Francie (Mary Frances) is strong and ambitious and is thirsty for education and understanding. She is emotional, sentimental and determined. It is her observations that carry the reader through the story.

Francie’s mother is Katie Nolan – she used to be a romantic but hardship has made her hardened and pragmatic. Yet Katie keeps the family afloat by working extra hard as an apartment cleaner and strives to save money despite the father’s alcoholism. She pushes the children toward education which was considered the golden ticket toward the American Dream. The way out of a dirt-poor subsistence. Francie thinks that the traits she shares with her mother keep them both from understanding some important things about life.

Francie’s father is Johnny Nolan who is a talented, romantic, sentimental warm man who loves his family. He is a singing waiter but not only is his work unstable, he sadly drinks up his earnings due to his belief that he is a disappointment to his family. Francie admires her father greatly as a hero for his feelingness and willingness to pursue his love for singing. She shares her father’s love for art, ideals, and romanticism. She loves his openness and affection too.

“Neely” (Cornelius) is Francie’s brother who the mom favors more than Francie. He fits in better with the neighborhood kids than Francie who stands out as being a loner weirdo in a tough world. He later develops the talents of his father but isn’t as ambitious about education. He resolves to resist alcoholism.

She works day and night to carry the family through and is a driving force to getting the children an education. Johnny also plays a role in bettering their lives despite struggling with alcoholism. He brings joy and warmth to their lives whereas Katie’s hard-nosed ways make her less sympathetic to her daughter.

The Tin Can With Money

Katie has two paths she can take: spend money like there’s no tomorrow or become a frugal goddess. While Johnny struggles with alcohol, Katie makes two decisions that prove to help the family through major tragedy. 1) She buys life insurance for Johnny and the kids. And 2.) she nails a tin can into her closet floor, with a slot.

She begins putting all extra money into this tin can Clink! Clink! for which it is too difficult to get back out again. It would be so easy to burn up this extra money. Tragedy strikes! She must pry the tin can but her frugality proves to save the family from destitution while she brings a third child into the world. The children have jobs too but education is prime whereas other children in the same boat would be expected to keep working to support the family and drop out of school.

The tin can is iconic and makes the reader want to nail a can in their closet to start saving immediately!

A Cup of Coffee Wasted?

For any faults Katie has, she makes up for them by her constant vigilance for the betterment of her children.

The family has a coffee ritual that proves that survival is not about bare-bones existence. It has its own delight and pride, too.

The mother insists that every night, Francie pours out a cup of coffee right down the drain. This is so Francie doesn’t take on a poverty mindset and it instills in Francie that they always have enough to dump a cup of coffee. It gives the impression that they have a modicum of decadence if they can waste one cup of coffee. Another image that etches itself into the reader’s brain!

A Tree Grows in Brooklyn poses a fine line for the reader.

Is it ever okay to lie?

Part of the resourcefulness of the characters centers on lying, with no moral qualms, almost suggesting that “the ends justify the means.” There’s at least one lie about their address so the children get into a better school district. Later on, Francie skips high school and starts college. These two scenarios are interesting because they would be highly unlikely today, and would result in severe punishments, too.

Is it better to be resourceful or honest to survive?

This is just something to ponder.

Francie sticks to her principles even while a man she falls in love with, on leave from the services, tries to seduce her. It would be tempting for her to give in for a number of reasons, but she prevails only to find out he had a fiancé all along.

This could have proven to be a trap that kept her from a different life, a mirror of her mother’s teenage marriage to Johnny.

Suffice it to say that the image of the Nolans is much different at the end of the novel than it was when it started.

Nowadays people are fixated on resiliency as a way to withstand hopeless life situations. But the idea of resiliency during the quickening of the tech age is almost in and of itself a commercialized concept. Now there are books and videos and gurus who try to impart this trait even though it is wrought forth from adversity the way a diamond is from coal.

On another note, will our kids know real resiliency if our pain and adversity are constantly blunted with new drugs, virtual reality, and other stimulations? Real resilience would be going through our trials and simultaneously resisting the urge to blunt our experiences in the same way some of the characters in the book resisted alcoholism.

Acceptance is an important trait that the Nolan children had. (Read Daisy’s amazing profile on acceptance as a must-have ingredient for survival). Neither of the Nolan parents had a grip on acceptance. The mother had grim resignation and sheer determination for a better life at almost any cost. And the father could not accept his feelings of inadequacy and held self-fulfilling delusions that he was a failure to his family.

Despite the poverty and adversity-stricken childhood, the Nolan children accepted their life and had a happy childhood.

That inexplicable trait inside that keeps us going against all odds is actually…Tenacity.

Lots of people have it, but few actually execute it. Fewer still execute tenacity with grace, love, openness, warmth, and empathy.

Resiliency is withstanding and absorbing the stress of life. Tenacity is bench-pressing it.

The word tenacious comes from the Latin tenax, which means “tending to hold fast.” Tenacity is a type of all-encompassing persistence and courage in the face of opposition or danger.

Francie was the perfect meld of her parents and their own tenacity. But unlike her mother, she didn’t become shut-down or hard-nosed. Nor did she let her feelings, attitudes, sentiments, and fantasies carry her into bad choices or addictions like her father. She kept her heart, her principles and her tenacity, and exercised her wit and will to finally reach a lofty height.

These are all gems I carried away from A Tree Grows in Brooklyn and to this day I cherish them in the most important arsenal of survival that we all have budding inside of our hearts. 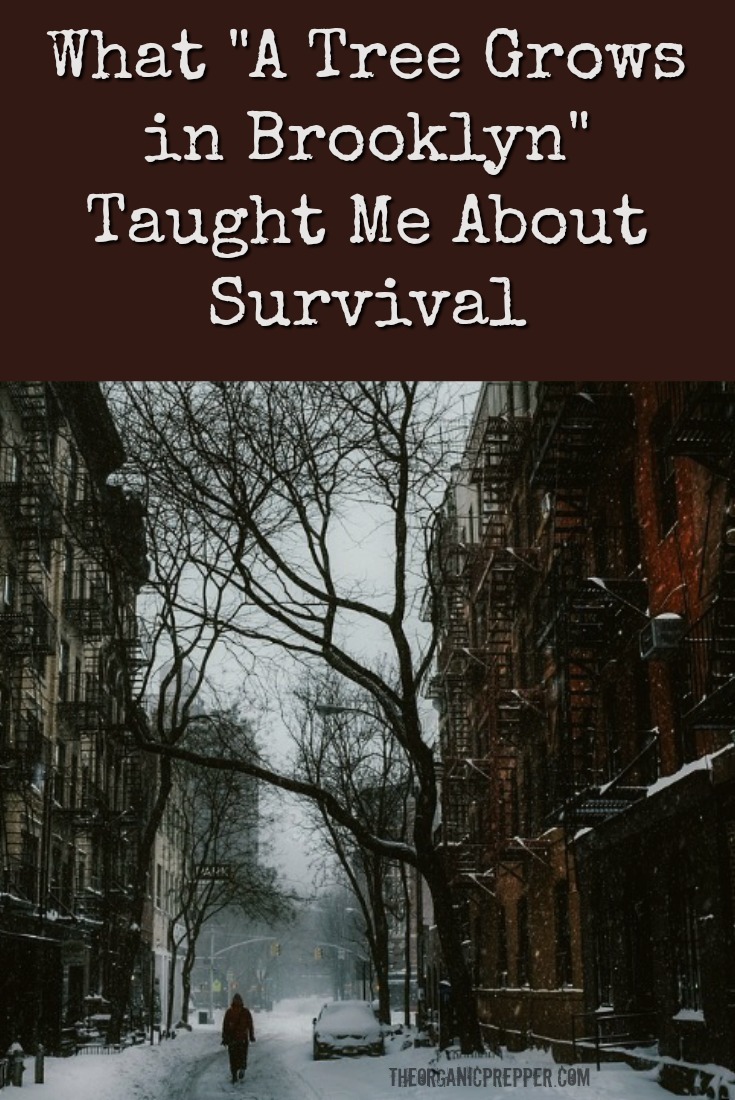