Want Some Weedkiller for Breakfast? Here’s What You Can Do to Avoid the Poison in Nearly All Dry Breakfast Foods 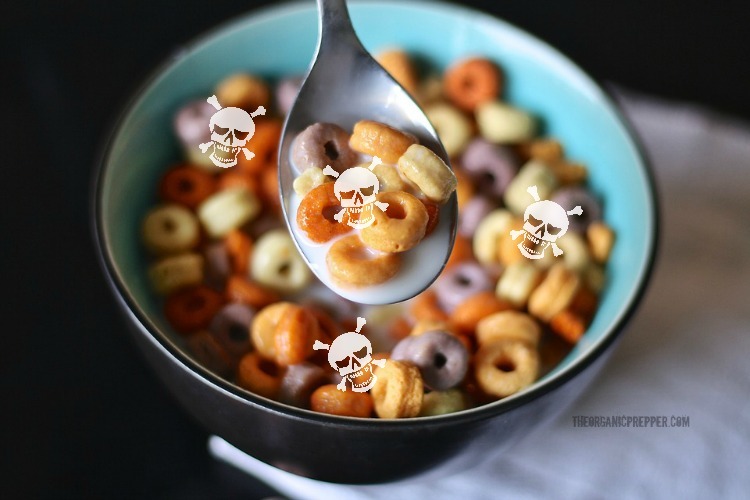 Does your favorite cereal contain glyphosate, the active ingredient in Monsanto’s Roundup weedkiller? The answer is most likely YES! Oatmeal, cereal, snack bars, and other dry goods now found to contain glyphosate at levels deemed “unsafe.”

After months of reports trickling in with tests showing that glyphosate is absolutely found in the food supply – yes, even non-GMO foods! – a large non-profit group has finally tested dozens more breakfast foods only to confirm the bleak suspicions.

Most of the products were a large amount of Quaker and General Mills brand cereals, oat products and snack bars. A PDF of the testing results is available here.

Although the government and the food companies like Quaker are squawking that the levels of glyphosate found in these tests are well within the government’s safety limits, this would be a lie of omission. Keep reading.

In August, the EWG conducted its first study, which found the presence of glyphosate in 45 samples of breakfast cereals from producers Quakers, Kellogg’s, and General Mills.

On the heels of this study, the group wanted to dive further and test specifically Quaker Oats and Cheerios products, because high levels of glyphos[a]te were found in the first study and they are two of the most popular cereal brands.

Results of the samples showed glyphosate was detectable in all 28 products, and levels considered unsafe were found in 26.

The EPA caps glyphosate tolerance at 5.0 parts per million (ppm).

But the EWG’s health benchmark is much more conservative and says any level greater than 160 parts per billion (ppb) is not safe.

The glyphosate in Quaker Oatmeal Squares Cereal Honey Nut is 18 times greater than EWG’s benchmark limit. But look at how much glyphosate the EPA allows in our food?

Despite the weak safety claims from both the government and the chemical makers, there is nothing safe about any kind of glyphosate exposure. No, it is not “safe enough to drink” like the propagandists try to say.

The cancer research wing of the World Health Organization even admitted in 2015 that glyphosate is a “probably carcinogenic to humans.”

CNN remarked of the past and present news:

Dr. Chensheng Lu, an associate professor of environmental exposure biology at Harvard’s T.H. Chan School of Public Health, defended the WHO group, calling it “a world renowned and reputable academic and research institute in cancer epidemiology.”
The EPA, in contrast, “is a regulatory agency, and in many ways a political agency,” he said. “In 2018, I would not hold EPA’s view on glyphosate as a fact.”

How is an herbicide that KILLS everything winding up in Non-GMO crops and foods?

People who are in the know about genetically modified crops understand that the plants are specifically genetically engineered to withstand incredible amounts of dousing with Roundup.

Roundup is the world’s most used herbicide and the word herbicide literally means “kill plants” or “plant death.” Roundup is used all over the earth for weeds because it really does destroy every living plant it touches. It kills weeds with minimal effort – a whisk and a spray. (But at what cost to your health and other living things?)

So, how can something that kills every plant be used on non-GMO food crops??

In a farming process called desiccation, crops are sprayed with a diluted glyphosate before harvest in order to quickly dry the crop.

Yes, American’s have been unwittingly eating foods that contain glyphosate as a hidden ingredient even though glyphosate is linked to cancer and kills precious gut bacteria. This might actually explain why Americans seem to have so many gut-related disorders and cannot handle foods like bread or beans.

Non-organic crops that routinely go through pre-harvest desiccation with glyphosate:

Why did the EPA increase the safety level of glyphosate in the food supply?

The government and Big Food likes to fall back on the government’s “safety limits” but what they aren’t telling you is that the EPA increased the safety limit of glyphosate in food!

“The EPA likely saw it was increasingly being used as a pre-harvest [desiccant] and increased the limit to allow it to be legal,” said Dr. Alexis Temkin, a toxicologist at the EWG and one of the authors of the report to Daily Mail.

“…the EPA increased the amounts of glyphosate residue allowed on oats from 20 ppm in 1997 to 30 ppm in 2008,” Temkin added. The Environmental Working Group is demanding that glyphosate levels be under 160 parts per billion.

Most people don’t know that glyphosate has been linked to breast cancer at parts per TRILLION. Let’s try to wrap our heads around that number for a second… This stuff is sprayed in our parks and school grounds! We track it into our houses on our shoes when we walk through parking lots.

So, the safety limits were never about safety. It was about keeping Big Agri happy and keeping those chemicals coming since they were already being used to a greater extent. Who cares about those kids eating their fruity-hoops at daycare while they watch Thomas the Tank Engine, right? That’s our loving government though…

Do you really want to take the government or food company’s word for their safety claims?

Look at DeWayne Johnson, dying of cancer after years of using Roundup….

Monsanto’s Roundup was recently the main exhibit in a landmark court case involving terminally ill groundskeeper DeWayne Johnson, age 46. His case was expedited because he is dying of non-Hodgkin lymphoma that his team believes to be linked to his use of Monsanto’s weedkilling products over the years. He was left fighting his case with cancerous lesions all over his body. He was never told of the risks of using the product even when he called the company to ask about the risks.

Although the jury found Monsanto guilty, a judge has now slashed most of the $286 million in punitive damages!

Monsanto is now assimilated by Bayer in an enormous merger, but their dark history is not forgotten.

What can we do to protect our health from glyphosate in our food?

Coincidentally, a report just came out that eating pesticide-free, organic food lowers your risk of blood cancer by 86 percent. This study was conducted on 69,000 French people, so it’s not one of those skewed, tiny samplings.

Participants in the JAMA observational study were generally 25% less likely to develop cancer if they stuck to organic foods.

For people consuming the highest amount of organic food, the study found a significantly lower risk of non-Hodgkin lymphoma, all lymphomas and postmenopausal breast cancer. The authors conclude, “Although our findings need to be confirmed, promoting organic food consumption in the general population could be a promising preventive strategy against cancer.”

Pesticides linked to cancer include the weed killer glyphosate, the active ingredient in Monsanto’s Roundup, and the organophosphate pesticides malathion and diazinon.

Organic food still has standards that are miles above what Big Agri does to your food supply. Eating as many wholefood, non-packaged, organic foods as possible is the best way to fortify your body against a toxic world. The more processed something is, the more likely it contains multiple sources of chemical traces. Try not to let your food choices further burden your liver.

When people throw up a resistance to buying organic, this information should really stop and make them think. Buying organic should not be viewed as snobby, highfalutin or hipster. It’s not a “waste” of money. It should be the #1 thing we strive for to protect our health if we can. Buying gluten-free products isn’t just about gluten – it can protect people from contamination from wheat products that contain glyphosate.

Instead of thumbing our noses at the idea of organic cuisine, we should extend our finger at the real harbingers of destruction.

And if we can’t buy organic?

Fortunately, many U.S. food brands are petitioning the EPA to ban pre-harvest glyphosate spraying. Until then try to make it to the farmers markets and have “the talk” with your farmer. Many of them are growing on tiny plots of land which wouldn’t make sense to use GMOs or desiccants. But they may not be able to say that they are organic because they aren’t certified, either. So talk to growers and look for “pesticide-free” signs. At the very least, many of the goods at a farmers market aren’t going to have glyphosate at all because glyphosate kills plant-life. Pre-harvest desiccation is most likely the choice of large-scale agriculture.

Perhaps it is even time to become your own farmer! If not in your backyard, how about on your kitchen counter?